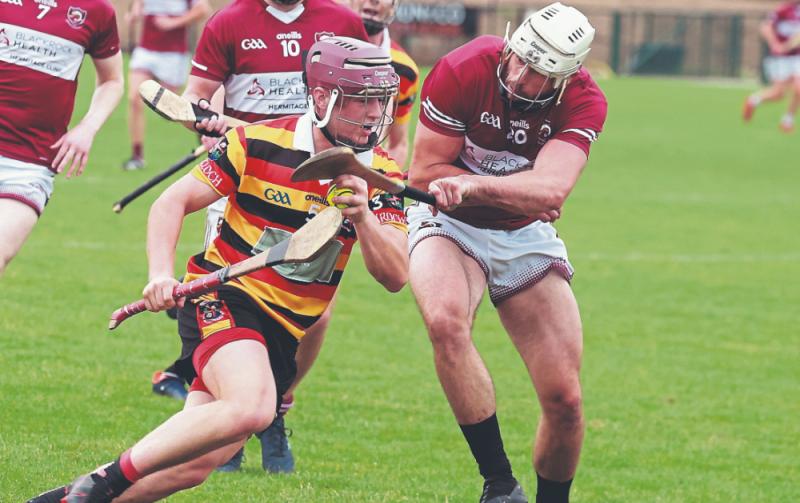 Ardclough Ben Reddan goes past the challenge of Lexilip Kevin O'Donnell in the UPMC Group B game at Hawkfield. Photo: Sean Brilly

The second round of the UPMC Senior Hurling Championship Group B brought Leixlip and Ardclough together in the hope that either could gain their first victory and avoid a possible relegation battle in Round 3.

Ardclough were quickest off the mark with two points from veteran Tony Spain and midfielder Liam Hanley.Two Cian Bracken frees and a 60 metre effort from Jack Travers had one ahead after 8 minutes.

Leixlip were denied a goal by a good Mark Lynam save and they broke down the field for Paul Fitzgerald to shoot over a lovely leveller.

The next five minutes belonged to Leixlip and they hit over five in a row to lead by five after 15 minutes. Cian Bracken hit three and one each from the Travers brothers Jack and Ben.

Leixlip seemed to fall asleep and within 10 minutes Ardlough had turned a five deficit into a three point lead.
Paul Fitzgerald hit three in a row before Tony Spain set up Eoghan Walsh for the game's opening goal.

Sixty seconds later Leixlip were dealt a further blow through a second Ardclough goal. Kevin Sexton gathered a long pass to set up Paul Fitzgerald and the ace marksman shot low to the net.

Two quick Cian Bracken frees and a long range effort from Stephen Ryan leveled it on 28 but Johnny Reeves hit two late points again after Tony Spain did the hard work and Ardclough lead 2-8 to 0-12 at the break.

The second half belonged mainly to Ardclough They stepped it up considerably and they hit 11 outstanding points from six different players.

Leixlip depended solely on Cian Bracken's accuracy from placed balls. He hit 1-5 during that closing 30 minutes but it wasn't enough to prevent a five point Ardclough victory.

Paul Fitzgerald was having an excellent game and when he hit the first of his five second half points on 31 he pushed Ardclough three ahead.

Two Bracken frees closed the gap to one after 34 but that was as close as they would get.
Martin Fitzgerald, Johnny Reeves Aaron Kelly and Liam Hanley stretched the lead to five as we entered the last quarter.

The closing 15 minutes was close but it was three late points from Paul Fitzgerald and two from Tony Spain that ensured a good and important win for Ardclough. Cian Bracken a late consolidation goal for Leixlip but it wasn't enough.

Ardclough had won on a 2-19 to 1-17. Arclough will meet Confey in round 3 safe in the knowledge that a victory will keep their hopes alive.

Leixlip on the other hand take on Celbridge but regardless of the result will be relegated as they have already lost to Ardclough.