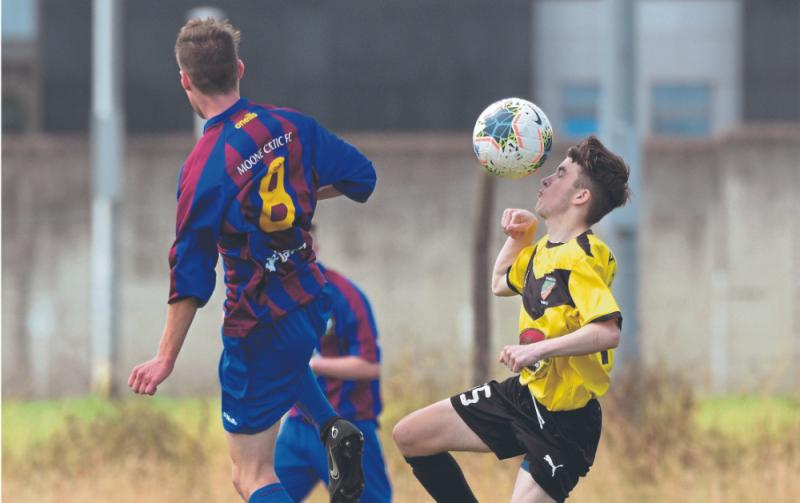 Despite scoring six in this tie Clonmullion will feel they left a lot more goals behind them through careless finishing. However it was Clane who opened the scoring after less that two minutes when Cathal Geoghegan hit a long ball straight down the middle of the visitors defence and found Dean Commiskey totally unmarked and he made no mistake from ten yards out.

With ten minutes gone the sides were level when Timmy Doyle intercepted the ball and stepped out of the defence and passed to Nathan Robinson who put Lee Doyle through and he made no mistake.

Soon after the visitors went close again when the elegant Mark Hughes hit a beautiful diagonal ball to Johnny Fennell who in turn chipped his pass into Jody Dillon who put the ball over the bar from six yards out.

Hughes was again the provider this tome to Danny Thompson who rounded the keeper Sean Brennan but then pulled his effort wide.

The Mull finally took a deserved lead on the half hour mark when Nathan Doyle made a great run down the right wing and fed Thompson who crossed first time and Dillon got across Gavin O Dwyer to head home.

A minute before half time the visitors thought they had made it 3 1 when Hughes rose highest to head home a Robinson corner but the referee ruled it out for an infringement.
T

he second half started as it had finished with Clonmullion piling on the pressure and when centre half Doyle put a great through ball to Mulhall he rounded full back Byrne but keeper Brennan made a great save.

With ten minutes gone in the second half the pressure final paid off when Hughes hit a lovely cross field pass to Dillon who controlled it expertly on his chest and put it into the path of Lee Doyle to get his second of the game.

Dillon was again the provider three minutes later when he teed up Thompson who feinted to shoot but instead rounded the keeper Brennan to roll the ball into an empty net to make it 4 1.

With 25 minutes left Clonmullion got their fifth when substitute Jay Connell played a lovely pass to Lee Doyle who chipped the ball over the defence and Thompson struck a powerful right footed shot into the bottom right hand corner.

To their credit Clane never gave in and a great three man move saw Eoghan Maguire pass to Commiskey who put Geoghan in on goal and he made it 5 2.

Clonmullion emptied the bench and Rickie Moriarity put fellow sub Dean O'Sullivan Owens in on goal but he seen his effort crash off the crossbar.

With 13 minutes left Mulhall finally got the goal he deserved when he played a one two with Lee Doyle to rifle home from eighteen yards out.

With a few minutes remaining Maguire intercepted a ball as Clonmullion tried to play out from the back and he set up Harnett who was unlucky to hit the crossbar.

Up the other end Ross Cardiff brought the best out of Brennan after great approach play by Mulhall and Robinson.
In the last minute Clane got a third after long ball to Maguire was excellently cut out by Corey moore but it deflected off Maguire and fell to Commiskey who had the easiest of tap ins.

Best for Clane were keeper Brennan, Byrne and O Dwyer in defence and Commiskey and Geoghan. While for Clonmullion Hughes and Timmy Doyle controlled the game from the back Robinson and Dillon in midfield, goal scorers Lee Doyle and Thompson while Cody Mulhall worked his socks off all game and some of his touches and vision were fantastic.

Kilcullen got their Lumsden cup campaign off to a shaky start away to Leixlip United’s over 35s on Saturday afternoon.
The home side started brighter and were 1 up after five minutes. The hard working number seven chased a lost cause down the right and managed to get a cross into the box that was hammered home by the Leixlip Striker.

The lead was doubled ten minutes later when some neat footwork by the Kilcock winger opened up some space and he sent an inviting cross into the box which was well finished by the home side’s front man.

Kilcullen were finding it difficult to keep the football but they did pull a goal back on 25 minutes.
Mark Wolfe played a neat one two with Mick Fitzgerald and raced behind the hosts defence and slotted the ball home 2-1
Kilcullen were settling into the game at this stage but Kilcock still looked a threat and they scored their third goal on thirty five minutes from a well struck free kick from the edge of the box 3-1

Importantly for the visitors, Dean O’Toole managed to flick a header to the back of the net from a well flighted Eamon Doyle free kick on the stroke of halftime to leave the minimum between the sides. 3-2

The visitors made some adjustments in shape and personnel at halftime and slowly took command of the game. However they missed a hatful of chances ro level in the opening fifteen minutes of the second half until, sixty minutes Keith Scanlon smashed a header home from a Doyle corner to level the game. 3-3

Goals flowed from this point on. First Doyle played a superb pass over the top to Healy who set up Wolfe for a tap-in . 5-3
Kilcock weren’t finished with the goals either and scored the goal of the game on seventy minutes. Some intricate one touch passing between the 6,10 and 9 sent the 9 clear and he finished with aplomb 5-4

Doyle was provider again for the next as Jason Keogh smashed home a header from a free kick that was especially enjoyed by a particular member of the travelling support! 7-4

The final goal of the game was created by a beautiful touch by Tom Healy that sent Simon Luttrell free and he kept his composure to finish well 8-4.

Rathangan were victorious over near neighbours Kildare Town on Sunday to progress in the Karina Donnelly Senior Cup winning 3-1.