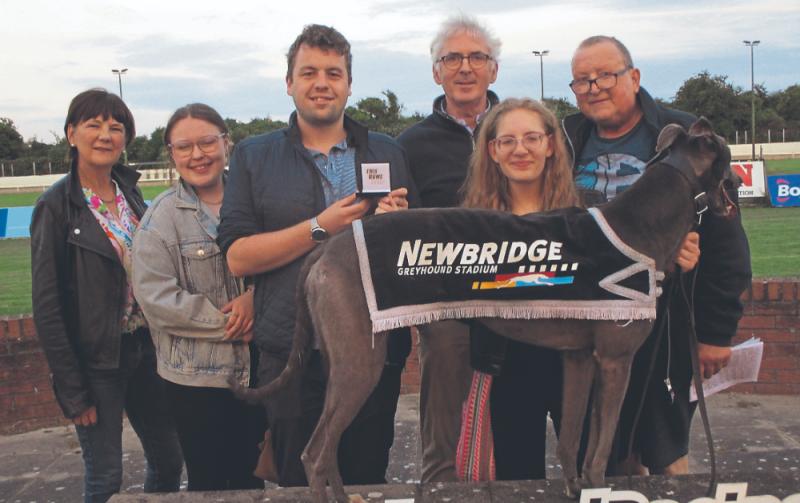 On a lovely summers evening in front of a fine attendance at Newbridge greyhound stadium the Miss Iryna O’Flaherty’s Junior Blue took the final of the RCETS A3 525 by pouncing very late to strike gold.

Earlier on in the evening Magills Town owned by Mrs Margaret Nolan left all known form behind as he set the night’s quickest return of 28.79 for the standard trip.

Over the sprint trip the Paul Cronin owned Droopys Timing scores in a sensational 17.43.

Racing opened with a very hot looking novice event. Once the lids lifted the Francis Curran owned Getgoin Freddie showed the early pace to lead the field to a second sectional split of a nice 17.68. Rounding the third turn with Lemming Leo and Pennys

Dynamite giving chase this Man Twenty One – Pennys Dilly March 21 whelp held a three length advantage. Swinging a tad wide off the final turn Freddie gave both chasers a glimmer of hope.
Once viewing the winning line first Getgoin Freddie hit it with a length and a half to spare over Lemming Leo. In turn Pennys

Dynamite was just a short head adrift in third with the infield clock showing up a fine 28.98.
In the second race held over the sprint trip Killeshill Jet set the early fractions but on the long run to the opening turn he was joined and passed by both Killough Buddy and Spot The Bob.

Killough Buddy owned by Le – Dangerous syndicate and handled by Derek Loughane wearing the striped jacket hit the corner first. Rounding the turn on the outer line Buddy cut in across Spot The Bob’s racing line and in turn this set the Godsend –

Milliondollarbaby whelp up for victory. Powering home to a four length victory he stopped the clock in a nice 17.88. Spot The Bob in turn took second place two and a half lengths ahead of Dashing Vic.

The winning owner was surrounded by her grand children following this fantastic home bred success.
Claire Spirit set the early fractions in the fourth contest to reach the opening corner ahead of Swift Yogi and Castlehill Jim. Entering the back straight Castlehill Jim took over the front running mantle to the final corner where the Ciaran Tackaberry owned Swift Yogi joined forces up front.

Coming off the final bend Swift Yogi (Eden The Kid – Bramble Swift) went up the inside line to strike the front and kicking on he went on to win by a length in a very nice 29.26. Castlehill Jim in turn took second spot a half a length ahead of Pennys Law. The winning owner’s son was delighted to pose with Yogi for the photo following this success.

Coming up in the grade since his last success over course and distance last month the Dennis O’Sullivan owned Adraville Breeze (Kinloch Brae – Montore Carrie) following a pretty level break completed destroyed the opposition with his early pace.

Racing to the second sectional split of a fantastic 17.56 the Breeze reached the third turn with a two length advantage over both Foxglove Bob and Swift Yurt. From her Swift Yurt began to close the deficit with every stride but in turn the winning line came at just the right time for Adraville. Flashing across the line as one the judge’s call went to the Breeze by a short head. Blackhall King came home strong a length shy in third position.
The winner here clocked a personnel best of 28.97.

RCETS A3 525 Final: This final gave all present a great battle to watch. From the outset Junior Blue owned by Miss Iryna O’Flaherty made great use of the blue sheet to force himself to the front as the opening corner came into play. Running a touch wide on the turn he allowed Lady Woodview who was drawn on the fence up his inner. Entering the back straight the Lodgefield Turbo – Paradise Kim four year old regained the lead to race to the third corner at the head of affairs.

Coming off the final turn again Lady Woodview poached the lead by sticking closer to the fence but once lining up for the winning line Junior Blue began to find his stride pattern again. In a driving finish in which the judge was again called into action Junior Blue pinched the winner’s prize money in the final stride to win by a short head in a nice 29.47. Likeable Lodge in turn took second place a length ahead of the Lady.

In the seventh contest we were treated to a fantastic sprinting performance from the Paul Cronin owned and trained Droopys Timing. Following a very level break by all the Dorotas Wildcat – Droopys Zero black bitch showed great determination passing the seven fifty yards box to emerge out of a closely knit pack to strike the opening corner first. Rounding the corner first Droopys Timing pulled away to score by an increasing four lengths as she hit the winning line in an excellent 17.43.
Now the winner of two from five a step back up in trip will be closely watched. Klopps Wee Clem raced in second spot from the opening corner in turn had a half a length to spare over third placed Coolemount Boss.

In the final contest of the evening the Martin Sweeney owned Melling Road got back on the winning trail following being knocked over in his previous contest two weekends ago.

Cutting in on the turn the Ballymac Best – True Survivor went into the back straight first as Lively Blake and Lackenhill gave chase.

Taking the third turn a length ahead of Lackenhill the leader moved wide off the final turn to allow Lackenhill close the gap. Powering home together Melling Road held out for a short head victory in 29.03.Last Daisy took the minor place money on offer.