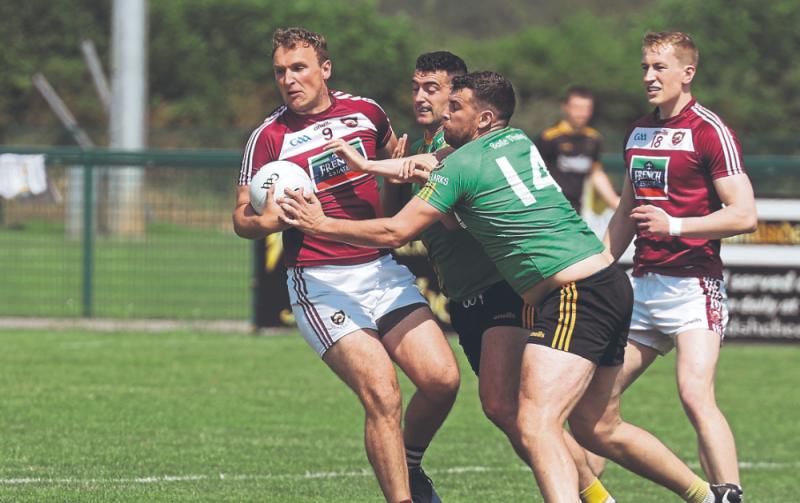 Group A has already been described as the group of death and where the most likely winner of the Auld Shebeen Athy IFC should come from.

After sixty minutes, in what was a quiet encounter littered with mistakes it ended in a draw. On this evidence nobody will be rushing out to back either team for overall glory.

Darren McDermott,who missed last week's win over Ballyteague,played a long ball to Conor Lawlor from the throw-in and his 'mark' was easily kicked over for a first minute lead.

Gavin Keating had to wait until the 12th minute to point a free after brother David was fouled. Emmet O Keeffe then got a black card for something he said to referee Killian Jones.

Conor Lawlor was again on the end of Darren McDermott's pass to get his second and his third of the half again from a mark followed on from a Tommy Moolick point after Luke Mahon had set up the Leixlip captain.

Despite going twelve minutes without a score the returning Emmet O'Keeffe have them a lift. Wing back David Dooley pointed on the run and when Emmet O Keeffe was fouled by Jack Quinn,Gavin Keating pointed his second free on 28.

Emmet O Keeffe then got his first after great work from Dan Gray who set him up for a simple score.
There was just about time for Darren McDermott to kick the best score of the half from all of 45 metres and Leixlip lead 0-5 to 0-4 at the break.

The second half was always going to be close but Emmet O'Keeffe, Dan Gray, with an excellent left footed effort into the Miltown end, and a Gavin Keating free had Castledermot two ahead six minutes into the half.

Leixlip centre back Ronan Fitzsimons, who was equally as impressive as last week, got forward for a point before fellow half back Ollie Birch found himself free inside the Castledermot half and despite his attempts to find a teammate he was forced to kick over a great point.

Dan Gray's influence on the second half grew and he set up Emmet O Keeffe on 39 mins to restore the Castledermot lead.
Tommy Moolick who pulled up sharply just before half-time and his second half participation must have been in doubt and while his influence was not as strong as previous days he still managed points in the the 41 and 43 minutes to put Leixlip ahead again.

Pauric Murphy, whose main job was to double mark Moolick, got on the scoreboard with a 46 minute free to leave it 0-9 a piece as we entered the last quarter.

Darren O Connor was on the field 60 seconds when Brian Claffey put him through on goals and he made no mistake to push Leixlip three ahead Directly from the kickout Darren McDermott fielded as his quick thinking set up Luke Mahon to push the lead to four.

With eleven minutes still to play this was Leixlip's last score and it was four late Gavin Keating frees, the last in the 65th minute after Oisin Nolan was needlessly fouled,that gained a deserved draw Castledermot.

Leixlip will be disappointed with a draw having gone into a four point lead but tally of wides and balls into the keeper's hands will be of concern.