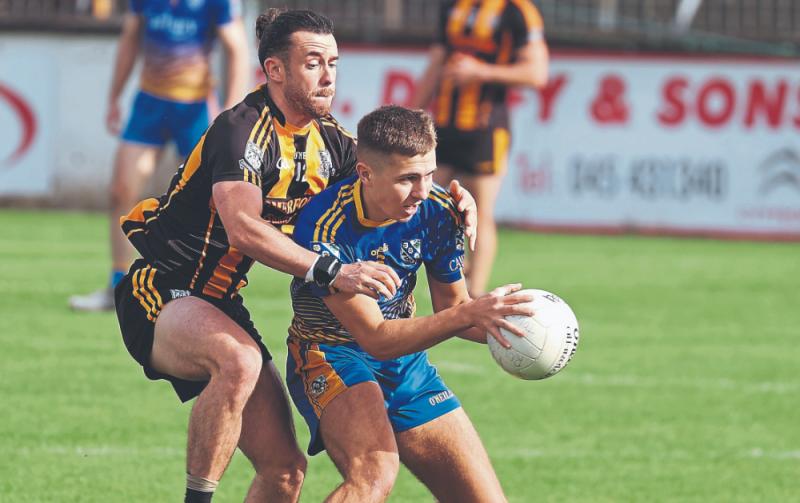 The Group C encounter of the Joe Mallon Senior Football Championship was the last game of five on a packed afternoon of action in Hawkfield and in fairness to Round Towers and Carbury they suffered the worst of the weather conditions.

Carbury won't mind as they ran out three point winners after a tough battle in a game where scores were hard to come by.
Jimmy Dunne opened the scoring inside three minutes for Carbury but Towers were in front by the 11t minute. Firstly Neil Scanlon converted a penalty on eight after Jason O'Brien was fouled in the square. Scanlon then pointed from play to ease the Kildare town men into a lead they held until half time.

Ciaran McKeown and Neil Scanlon swapped points on 13 and 15 minutes before a second Jimmy Dunne effort from play was quickly followed by a Jack Cully free to leave the minimum between the sides as we passed the 20 minute mark.

Twice within three minutes Towers full forward Michael Murphy was fouled forty metres from goal and on both occasions goalkeeper Colin English converted with ease. Andrew Dermody's late point for Carbury left it 1-4 to 0-5 in favour of Towers.
The second saw Carbury open impressively and within five minutes a Jack Cully free and an excellent Morgan O'Flaherty point had the sides level.

The turning point came on 39 minutes when a Jack Cully effort dropped short and came back off Colin English for Andrew Dermody to pull first time to the Towers' net.

Carbury were ahead for the first time since the third minute.
A third Colin English free was matched by a Derek McCormack fisted effort to keep the gap at three.

When Jason O'Brien tapped over Davy O'Neill's pass Towers sensed a comeback but instead it was Carbury who hit three in a row through Jimmy Dunne and frees from Tommy Gill and Jack Cully.

Towers to their credit rang the changes and two late points from a DJ Flynn free and Neil Scanlon kept their slim hopes alive. Carbury did kick four wides in those closing minutes but Towers never got that goal opportunity.

Referee Matthew Redmond did brandish two late reds — a straight red to Cathal Daffy and Carbury's Dean Cummins for two yellows but this was never a dirty game.

Bigger tests against Moorefield and Johnstownbridge are ahead for both teams but it's Carbury who have the advantage of this opening day win.