Kildare soccer roundup as Lumsden Cup gets under way 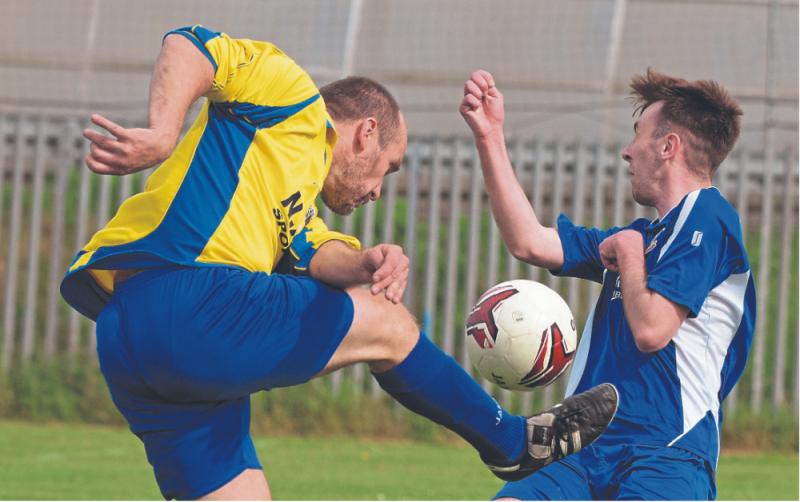 A huge shock in Aldridge Park on Friday evening when KDFL Senior League hopefuls Athy Town AFC were dumped from the Lumsden League Cup by Monasterevin AFC from the Premier Division.

Monasterevin started the brighter of the two sides and were zipping the ball around with some neat one and two touch football.

Neither side threatened much in the opening fifteen minutes and the game had a good tempo to it.
Athy started to press after the opening stages and were causing some problems on the wing but the back four of Steven McNally, David Murphy, Andrew o’Gorman and Eoin Phillips held firm and keeper Eugene Nolan dealt with everything that came his way.
Athy limited Monasterevin to half chances and were assured in their own back line too. Half time 0-0.

The second half was a more open contest and both teams causing problems for each other. It was Monasterevin that took the lead from a corner that was swung in and Jonathan Higgins got his head to it the ball, it was looping over the keeper and defender, when the man on the line headed it into back into his own players head and into the net.

This spurred Monasterevin on and with Martin Byrne introduced, he gave a bit of pace on the wing and he was proving troublesome.

The second goal came from Martin getting out of a tight spot and playing the ball to the feet of Eamon Kelly who turned and played a great cross field ball to Patrick Staniec. He kept his composure under pressure from defender and slotted it into the bottom corner giving keeper no chance.

Monasterevin were good for their two goal lead and made some changes to freshen things up and Kevin Kelly now in centre back made some good clearances. Evan Foley was buzzing about and giving no time on the ball to the midfield of Athy.
Athy got back into game when a clearance from Eugene was well closed down by Athy player who got a touch that went goal bound.

Monasterevin held firm for last ten minutes and soaked up any pressure to see them into next round. An all round team performance from the visitors Monasterevin AFC.

On a night Danny Phillips in the first half was Athy Town's best player.

Agreat start for Coill Dubh in the illustrious Lumsden Cup with 6-1 win over Sallins AFC.
Coill Dubh were out the traps early with great pressing and passing to get up Barry Noone in the first five minutes. Coill Dubh doubled the lead with a great strike at the edge of the box coming from Conor Brady. They continued to have great passing against the Sallins team that pressed very well. In the thirty third minute Coill Dubh went 3-0 up with Barry Noone doubling his tally on the score sheet with great switch of play coming from Aeneas Murphy for a ball to be swung in for Barry to finish.

Credit to Sallins who came out in the second half creating chances, with a few offsides but Coill Dubh then went on to punish again with a fourth goal coming from Billy McNamee with a beautiful dink to lob the goalie.

Sallins went on to get their well deserved goal coming from a shot across the goal for a tap in across the post. Billy McNamee then went on to score in the eighty fourth minute with another good finish through the goal keepers legs.
Coill Dubh finished the game with a goal from Dylan Hannon with Sean MacMahon squaring the ball for a tidy finish.

Lumsden cup kicks off as Newbridge get past Castle Villa

Suncroft secured their place in the next round of the Lumsden cup with a comprehensive victory against a depleted Kilcock side at the Community Grounds on Saturday night.

The home side looked the most likely to open the scoring from the outset with the industrious Paddy Flood causing problems for the Kilcock defence and dangerous crosses coming in from both full backs, Josh Lee and Cathal Mahon.

The first real sight of goal came in the tenth minute when KDFL Player of the month for May Kieran Sheedy failed to make clean contact to a Josh Lee corner with the goal at his mercy.

Suncroft got a deserved opener in the nineteenth minute, a Sheedy through ball saw Paddy Flood bear down on goal only to have his route blocked illegally by the Kilcock defender.

The penalty was given and duly dispatched by Dylan Connolly.
The Suncroft midfield trio of Sheedy, Connolly and Dylan Byrne were beginning to dominate proceedings with the former two combining excellently to score their side's second goal.

Sheedy played Connolly through on the left hand side of the box, Connolly beat his marker and played a well timed pass in front of the on-rushing Sheedy whose side foot finish from fourteen yards found the bottom corner of the net with thirty five mins played. The home side took a deserved 2-0 lead in at the break.

The youthful Kilcock side, to their credit, were not prepared to give up the ghost in this tie just yet. Early in the second half they began to move the ball around quickly and cause the home side some problems only to have their path to goal continually shut down with the resolute defending of Ryan Farrell and Craig Durney and the safe hands of 'Croft 'keeper Colin Farrell who seemed to gather in every ball that found its way into the box.

Suncroft got the all important third goal in the 65 minute. Ben McInerney, making his first senior start, played a perfectly weighted through ball into the path of Dylan Connolly who took the ball around the Kilcock 'keeper and tapped into an empty net for goal number 10 of the season.

Eoin Doyle and Bryon Reid stepped off the bench to mark their return from injury layoffs, with Doyle having missed the last 10 games with injury and Reid the last 6.

Doyle making an immediate impression, when only minutes on the pitch he beat two players on the left hand side to work his way into the box but saw his powerful effort come back off the post.
Reid then thought he had set up his side's fourth when his inch perfect back post cross found Niall Costigan but the Kilcock 'keeper somehow kept out his close range volley.

Suncroft were not to be denied their fourth goal, Doyle winning possession twenty five yards from goal and taking one touch before firing powerfully past the keeper in the eighty fifth minute. The home side had strong performances all round but particularly impressive on the day were Dylan Byrne, Kieran Sheedy, Paddy Flood and a man of the match performance from Dylan Connolly

Rathangan were happy to have their first round of the Lumsden Cup at home. It was a slow start and Rathangan had a few chances but couldn't seem to find the target while at the other end SPWFC’s Stephen Millane and Marvin Mbala had chances.
Grant Courtney, Gary Hunt, Shaun Walsh and Marc Dowling kept everything tight for the visitors. It took thirty two minutes for Rathangan to get on the score sheet with some great team play then Lee Moore sets up Dillon Broderick to strike the ball into the net.

Rathangan were unlucky not to capitalize before half time. In the second half St Patrick's wells put on some pressure with Rathangan again solid in the backs with Jim Brennan doing superb work.

In the 55 minute Rathangan were starting to dominate Alex Conlan was a class act to watch as he beat three players with some skilful display to strike a long range power shot to the left hand corner of the net.

A class goal that will be hard to beat as goal of the year. Rathangan seemed to drift shortly after the goal and St Patrick's Well made some changes and were causing some problems, on the 83 minute when Rathangan didn't clear the ball in midfield and St Patrick's well capitalized as Rathangan couldn't clear and James Callan was on hand to tap home for SPWFC.
Rathangan again couldn't seem to get anymore shots on target as they saw the game out to reach the next round of the Lumden cup.

Best for the winners were Jimmy Brennan, Dylan Broderick, Iain Doyle and Alex Conlon. While for the visitors Headon, Millane, Dowling and Hunt excelled with their Man of the match Sheldon.

A comprehensive win in the KDFL Lumsden League Cup for the current holders Clonmullion AFC when they put six past Division 1 side Caragh Celtic FC.
Jolie Dillon striking two and one from Dean Fennessy for home side.