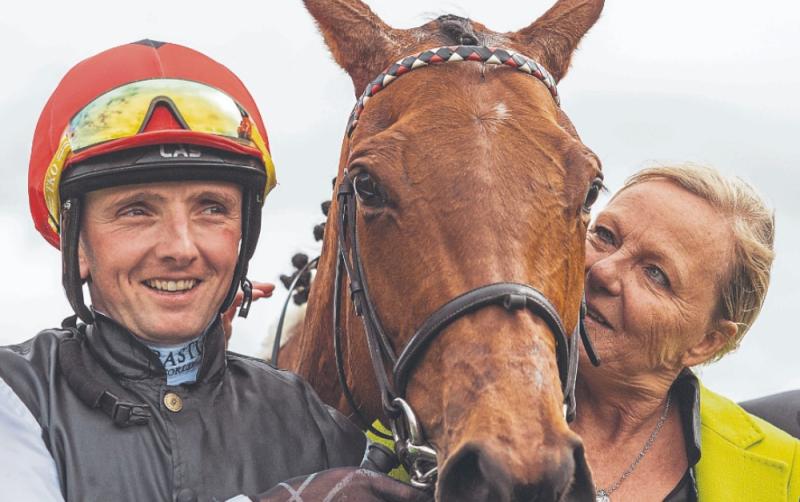 Sunday at the Curragh belonged to Dermot Weld and Moyglare Stud Farm who captured the feature Tattersalls Irish 1,000 Guineas with Homeless Songs. Ridden by Chris Hayes, the 11/2 chance built on last month’s impressive Leopardstown success with a stunning five and a half-length win over the Aidan O'Brien-trained 11/4 favourite Tuesday to give the veteran Curragh trainer his fifth win in the race, 40 years to the day after the first.

In all it was Weld’s 20th Curragh Classic and his 27th European Classic in all. He said, “My only concern was whether she could carry that speed over a mile, but she relaxed beautifully for Chris and he gave her a most perfect ride.

The Coronation Stakes at Royal Ascot would now be a definite possibility. She’s a great filly to have and the next day will tell us even more.” Jessica Harrington won the eight-furlong fillies’ handicap on the card with the Nathan Crosse-ridden Nectaris.

In the Alpha Racing colours, the 18/1 chance fended off the Ger Lyons-trained 5/2 favourite Juncture to win by half a length.
Seamie Heffernan rode the final winner of the three-day festival as he took the 10-furlong fillies’ maiden on 8/1 chance Kiss

You Later which beat Johnny Murtagh’s Star Angel by a length and a half. It was Aidan O'Brien’s second winner of the weekend.

Monasterevin’s Shane Kelly led home a 1-2 for the Murtagh yard when partnering the Brunabonne Syndicate-owned Mashhoor to win the 10-furlong premier handicap at the Curragh on Saturday.
A 7/1 chance, the four-year-old led over a furlong out and went clear for a four-length winner over the Ben Coen-ridden Safecracker.

Murtagh was a winner again in the concluding eight-furlong handicap as Chicago Bear scored a narrow success in the colours of owner Samuel Mencoff. Coen was in the saddle this time as the 13/2 chance led in the closing stages to beat the Willie McCreery-trained Morning Approach by a neck.

Johnny Murtagh was also responsible for the first County Kildare-trained winner on Irish Guineas weekend as Navagio landed the seven-furlong maiden at the Curragh on Friday evening.

Owned and bred by Ballygallon Stud, the Ben Coen-ridden 4/1 chance made much of the running to pip the Jessica Harrington-trained 6/5 favourite Admiralty Place by a short-head.

The Michael Grassick trained Verhoyen scored a runaway success in the seven-furlong handicap to record his fourth win at the course. Successful on the Saturday card of last year’s Guineas festival, the 17/2 chance made every yard of the running and raced clear inside the final furlong under Billy Lee to win by all of six and a half-lengths from Edward Lynam’s pair Heavenly Power and Punk Poet.

Michael Halford and his old ally Shane Foley combined to win the opening eight-furlong maiden at Killarney on Tuesday where Start Line raced to a four and a half-length success.

Owned by Nasir Asker, the 4/1 chance made all the running as he beat the Ger Lyons-trained Culcor in convincing fashion.
Willie McCreery shared the next two winners with Billy Lee; the 1/4 favourite Cigama and All Lies Ahead was a one and a quarter-length winner of the maiden over the same distance.

The first of seven winners at Tipperary on Thursday was sent out by Friarstown trainer Katy Brown who took the two-mile maiden hurdle with 10/1 chance Must Meet Cecil. Eoin Walsh made all the running on the Tom Sheridan-owned four-year-
old which was nicely clear at halfway and ultimately beat the Gavin Cromwell-trained 5/2 favourite Minella Youngy by two and a quarter lengths.

Jessica Harrington won the two and a half-mile handicap hurdle with the Sean O'Keeffe-ridden Fame And Joy. A 12/1 shot, the six-year-old got up on the line to deny the John McConnell-trained 4/1 chance Drumbear by a nose for owner/breeder Patricia Coghlan, Diana Oakes and Guy Culliford.

Cork
Johnny Levins supplied Donagh O'Connor with the second of his three winners at Cork on Wednesday where Shawaamekh made a winning Irish debut in the seven-furlong handicap.

The 28/1 chance raced up with the pace and led late on to score for owners Ross Howard, John O'Riordan, Tom Lynch and Jason McGannon.

O'Connor had earlier won on the John McConnell-trained 20/1 chance Hernes Hill and completed the first treble of his career with a 9/2 success on Fennor Cross, another for McConnell, in the concluding 10-furlong handicap.

Gary Carroll was back in the winners’ enclosure as he teamed up with Ger Lyons to take the five-furlong handicap on 13/2 shot Neo Soul. In front at the furlong pole, the three-year-old won comfortably from the Fozzy Stack-trained Red Lacewing.
Another cosy winner was the Johnny Feane-trained Urban Oasis which completed a hat-trick of wins in the space of two weeks under Jamie Powell. The pair combined to capture the 10-furlong apprentice handicap, winning by five and a half-lengths from the Denis Hogan-trained Breakintheclouds at odds of 5/4 favourite.