How the Kildare ladies won their Leinster intermediate championship 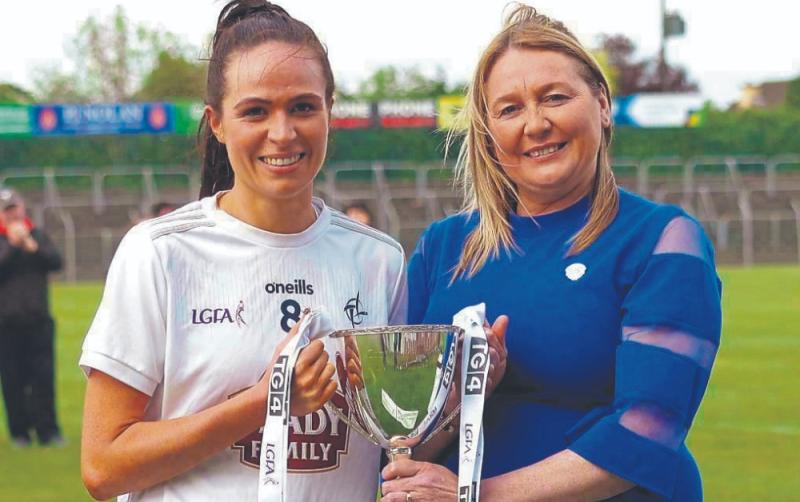 Kildare are the TG4 Leinster Intermediate Champions after a six-point victory over Wexford, a late Lara Curran goal ensured the victory while McGinn pulled off a last minute double save to maintain the handsome winning margin.

It was Wexford who got the better of the opening tussle with an Ellen O’Brien point opening the days’ account before Kildare looked to level through a Neasa Dooley point in the eight minutes.

This was to be the only time that Wexford would hold the lead in the opening half as Kildare looked to build on this as the tie progressed. And it was the Kildare side to have the ball into the Wexford net moments later, again with Dooley applying the final touches.

With Aoife Rattigan finding Dooley, the Athy forward slapped into the Sarah Merrigan’s net only for the goal to be disallowed as a square ball and a free out awarded. Winning the free Grace Clifford looked to ensure that Kildare would build on their attack and found Ciara Wheeler in space.

With Dooley again in space on the 20-meter line Wheeler looked to put the ball through to the lightening quick forward. Turning, Dooley was tripped and with no other option a penalty was awarded. Converting Dooley sent Kildare a goal clear before Wheeler made this four.

Looking to ensure that they stayed in the tie Catriona Murray and Ciara Banville pointed to haul Wexford back into the tie. A Curran free restored Kildare’s three point advantage before captain Clifford again had the green flag flying at the town end of the Netwatch Cullen Park venue.

With Lara Gilbert and Curran both instrumental in Clifford’s effort it was the determined run of the captain that ensured Kildare would profit. Gathering possession from Gilbert around the centre of the field, she found Curran. But continuing her gut busting run, Clifford found space. With Curran aware to this she fisted to Clifford who netted.

A late free from Tara Doyle was all Wexford could muster before the break to leave Kildare five clear as the sides took to the dressing room.

On the restart Wexford looked to cut that deficit and a free from Doyle once more soon had four between the sides moments after the throw in.

A Curran free looked to again restore the half time five-point advantage as Kildare began to labour in their attack. A Banville point followed by a Tara Doyle goal looked to leave Kildare supporters on the edge of the seats as the yellow bellies sliced the deficit to one point with fifteen minutes remaining in the tie.

Refusing to allow Wexford continue their comeback Curran converted a free before a Dooley point again had three between the sides.

With Kildare again in possession seven minutes from time Curran gathered the ball and jinking right and left she dummied the challenge of Aoife Cullen before rounding Clara Donnelly to net blasting Kildare six clear.

An Amy Wilson point again had the sides separated by five as Kildare were all too aware of the fire power that Wexford possessed as the time quickly ticked to full time.

With Kildare soon reduced to fourteen players following the late sin binning of Mia Doherty, Rattigan once again ensured that Kildare would hold the six-point advantage with fifty-two seconds remaining.

Kildare pulled every player behind the ball at this stage as Wexford launched one last attack. Withstanding the onslaught with a fine double save from McGinn, she cleared the ball from the heart of defence as the claxon sounded.

You can click blow for match reaction from Kildare captain Grace Clifford and manager Sean Finnegan.