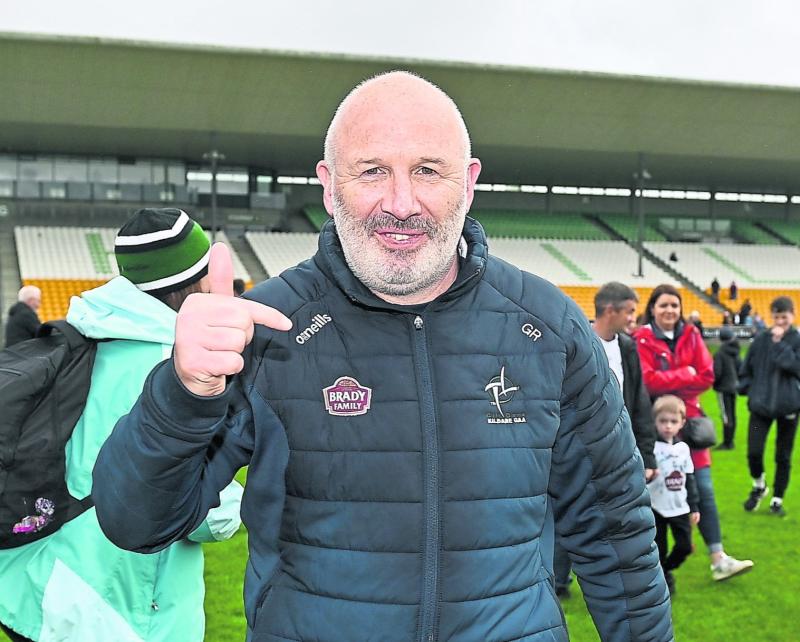 After securing a 16-point win over the Allianz League Division Three champions and scoring 2-22 in the process, most managers might lean towards giving a word or two of praise to the attacking play of their team. After all, Mickey Harte’s initial summary of Kildare’s performance was that “if someone took a shot at goal, it was going over the bar”, so surely Glenn Ryan might say the same?

But then, the Round Towers man didn’t like to give forwards anything on the field of play, and some things never change. When asked what pleased him about Kildare’s performance, he said ‘the workrate of our lads’.

“Unless we have that every day, then every game will be more difficult than it should be.

“I’m happy with the performance, we’re very happy to get the result” he continued.

“We knew we’d have a very tough task coming in against Louth, who were coming in with a couple of great performances, victories and promotions over the last couple of years. In the second half they really came at us early on and we had to withstand a lot of pressure and a lot of good play on their part, and thankfully we did.”

In the early stages of the contest, Kildare were utterly dominant, outscoring Louth by 0-10 to 0-1 and controlling every sector of the field. It was only then that Louth settled into the tie, cutting the gap back to five points before Kildare kicked on again, sparked by Kevin Feely’s penalty.

“It was important that we started well, I’d say it was a case maybe of the game settling down a bit,” Ryan said.

“From our point of view, you’re always looking to improve in every quarter, in every five minute period or whatever the case may be. But you have to accept that the other team is going to come into it and it’s important that you weather that storm when they do.”

When asked about his team’s 12-minute scoreless spell after half-time, Ryan simply cited ‘good play on Louth’s part’ as the cause, though no doubt the players will get a lot more detail over the course of this week.

But for public consumption?

“Our aim is just to keep improving with each game that we play and if we improve we have some chance, if we don’t we’ve no chance, and so we have to look at getting better as we go along”.

And is the performance of the subs a good sign in that regard?

“Well they’re extra players, they are players who are very much up to the speed, and it’s very difficult to pick this team. We expect to be happy after games because we expect good performances from them.”

The bar is about to be raised, but based on this performance, Kildare have plenty of clearance in reserve. 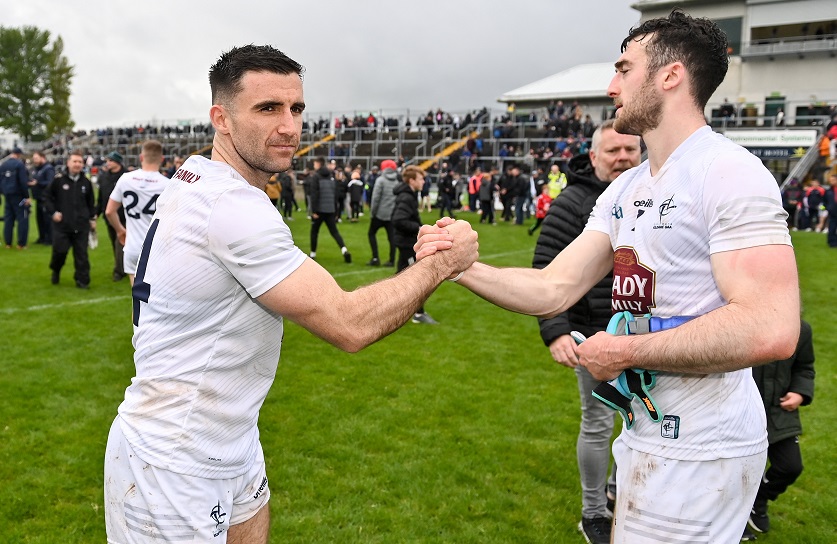 Ryan Houlihan, left, and Kevin Flynn of Kildare congratulate each other after their side's victory in the Leinster GAA Football Senior Championship Quarter-Final match between Kildare and Louth at O'Connor Park in Tullamore, Offaly. Photo by Seb Daly/Sportsfile

GAME AT A GLANCE

There were plenty of eight out of ten performances, and possibly even one or two nines, though no real ten on this particular occasion. Top of the list was corner back Ryan Houlihan, who was sharp and purposeful on the ball, and ravenous in his pursuit of it when he wasn’t. Daniel Flynn and Ben McCormack would be next in line, if you’re of the mind that if a team scores 2-22, a scoring forward should be recognised!

A remark was passed at around the 45 minute mark, when the lead was 0-13 to 0-8, that what Louth needed was a bad goal. A good one might only have stirred Kildare into action, but a miserable, preventable goal might have had additional negative psychological impact.

Then Daniel Flynn took it on himself to drive at the Louth goal and try to earn a Kildare green flag that would put the game to bed. He was fouled, Feely slotted the penalty, and suddenly Kildare were out of sight once again.

SCORE OF THE GAME

For aesthetic beauty, it had to be Louth’s ninth point. Ciarán Downey’s gorgeous diagonal ball gave Sam Mulroy the opening to lift the ball and round his marker in one fluid movement before clipping the ball over with his weaker foot.

It was sublime to watch, even if it was utterly irrelevant from the point of view of winning the game.

Not for the first time this year, David Gough was a little bit more involved in a game than should be the case for a man in the middle. While his calling of general play and fouls on the ball was absolutely spot on, it all broke down when it came to cards, moving frees forward, and generally trying to keep the game going without friction. Conor Grimes paid the price when he was sent off late on for a second bookable offence.

A Leinster semi-final against Westmeath, who enjoyed a good 3-14 to 0-15 win over Longford at the weekend, reversing their crucial league defeat to the same opposition in the spring. The venue for the game is Croke Park on May 15 in a double header with Meath v Dublin.