Kildare GAA: Time for Lilies to realise what should be the number one priority

Kildare's opening league game against Cork has the potential to be the most vital game, not just of the league, but of the entire season of 2021 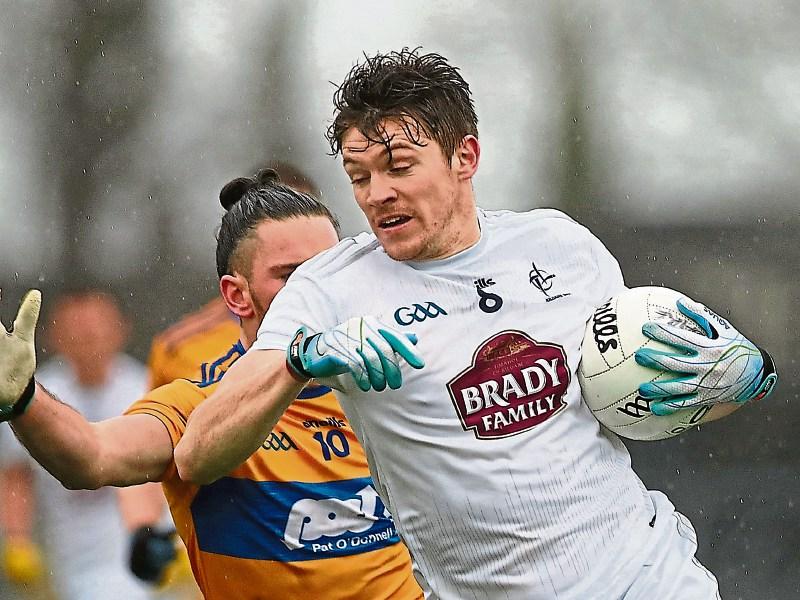 Kevin Feely on the attack against Clare in Ennis last year

As the GAA season finally gets under way one thing is for sure, regardless of how the season pans out Kildare's opening league game against Cork has the potential to be the most vital game, not just of the league, but of the entire season of 2021.

Yes, we are living in difficult times due to Covid-19 and while few can argue that making the football championship a straight knock-out affair is understandable, but having promotion and relegation in a three-game league is asking a lot.

This season sees Jack O'Connor lead Kildare footballers for the second year in a row and if last season was something unusual and unpredictable, it is nothing what this upcoming ‘season’ has the potential to offer.

No pre-season as such; few, if any warm-up games apart from in-house offerings; no form to go on and with the Allianz League operating in two groups in each division, it gives managers and their backroom folk, little or nothing to go on. While also putting a lot of unnecessary pressure on players.

Yes, it will be great to be back in action but this season, due to Covid-19, has the potential to be a season that could be practically written-off before it even gets under way, particularly with the league format and then the straight knock-out in the championship.

What an opportunity missed to have had a once-off open championship, a complete open draw, no provincials, no seedings, just all-in; weaker teams with home advantage; could have been memorable, exciting and even unique.

The format of both league and championship in 2021 will undoubtedly suit the stronger counties.

The Dublins, Kerrys Donegals and Tyrones, along with another one or two, of this world won't be overly concerned with the league, their sole concern and focus will be on championship.

However for the vast majority of the rest of the counties, the most important competition of the year, any year, is in fact the league where an opportunity to gain promotion presents itself and regardless of what division a county operates in, the opportunity to go up a division is a massive incentive, a massive achievement, especially knowing in their heart of hearts that success at championship level is beyond their capabilities.

Many counties, in fact most counties, use the league to introduce new players; blood young, enthusiastic players and over a six or seven game programme that can be done gradually from game to game, but that is not possible this time around.

At the same time should a county, such as Kildare for instance, make the league its number one priority, the aim being to gain promotion to the top table?

It really makes sense, however the big draw-back is the fact that league, as usual, comes before the championship, thus curtailing, on this occasion, the opportunity to blood and introduce young and inexperienced players. Remember if a county loses its opening game, suddenly not only is their chance of gaining promotion after suffering a major set-back, they will also be eyeing the wrong end of the table and the possibility of being drawn into a relegation dog fight.

One can seriously ask the question should their in fact be any promotion, or relegation at all in a league that things can be decided in a mere three games?

Yes, it would leave the league in some respects meaningless, but it would allow each county to experiment for their upcoming championship, as well as giving players some experience without any major pressure, especially in the situation we find ourselves in in 2021.

Kildare's last game was Sunday November15 when Meath filled the Kildare net on no less than five occasions, all in the second half.

The final whistle may not have been a fair reflection of how the game panned out but conceding five ‘majorss’ is, to put it mildly, worrying in the extreme.

For long periods The Lilies dominated that game and played some excellent football that had the opposition at sixes and sevens, but if the truth be told ran out of steam; ran out of gas, ran out of ideas and in the end the more physical, more powerful side advanced.

And that coming from a Meath team that went through the 2020 Division 1 League campaign without recording a single win, gaining a mere point in their final fixture.

But despite that, and of course being relegated, were stronger, fitter and when the opportunities presented themselves, killed off Kildare with five second half goals.

But probably the real worry from a Kildare point of view was that Meath went on to receive a mother-and-a-father of a beating in the Leinster final against Dublin.

But all things considered what it showed was just how far Dublin are ahead, or some might even say, how far the likes of Meath and Kildare — regarded by many as the two next strongest in the province — are behind.

And then we see what The Royals did to The Lilies.

It is, unfortunately, nothing unusual from a Kildare perspective.

Lovely lads, more than capable of playing lovely football but when push comes to shove; when the fat is in the fire, when the intensity is at its greatest, there is still something missing; that vital ingredient that seems to stop Kildare from getting over that all-important line.

Jack O'Connor and his backroom team, on the face of it, are as good and experienced as what's around.

If Kildare are going to make that all-important break-through come championship time (when ever), the first thing that needs to be achieved is to be playing football with the big boys, week-in and week-out.

And that is only available in Division 1.