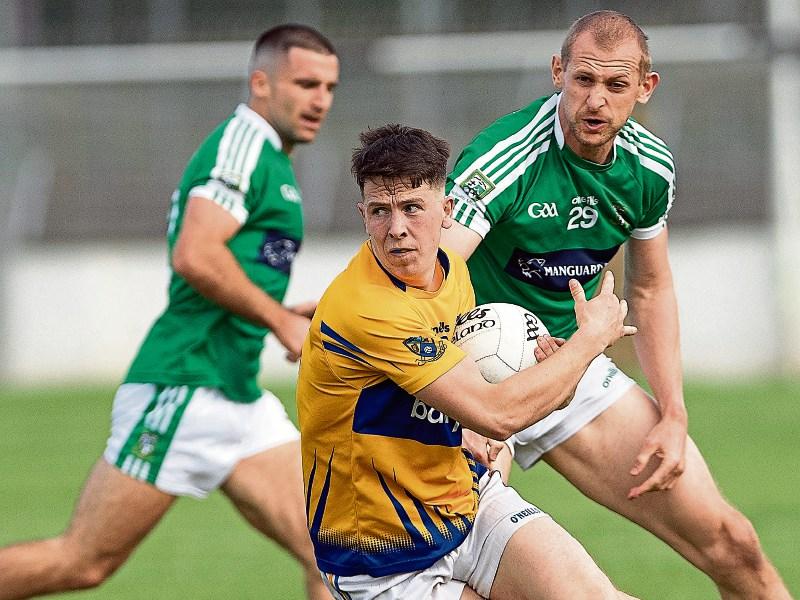 Raheens caused the shock of the Kildare senior football championship on Saturday afternoon at St Conleth's Park when deservedly defeating Moorefield by a single point.

All eyes immediately turned to Hawkfield where Carbury and Maynooth were doing battle in the other group game and while Maynooth led close from home, Carbury hit back to claim victory, thus ensuring three teams finish level, with Moorefield topping the group on scoring difference, ahead of Raheens who also qualify for the quarter finals.

Raheens got off to a flying start with mid fielder Liam Power bursting through to split the posts. The Moores soon got into gear with full forward Éanna O'Connor opening his account.

Mickey McGovern gave an early indication of his ability getting inside but his shot was straight at Tom Kinsella in the Moorefield goal.

Liam Callaghan fed Éanna O'Connor who made no mistake but Mikey McLoughlin had the sides level with a fine point after eight minutes.

Two minutes and the boys from Caragh hit the front, a brilliant ball in from David Fitzpatrick saw Mikey McGovern get inside Liam Healy and the corner forward made no mistake rifling the ball past Tom Kinsella to give Raheens the lead 1-2 to 0-2 after ten minutes.

Back came Moorefield, Éanna O'Connor knocked over a point before Adam Tyrrell hit a typical one of his long range efforts to level before O'Connor converted a free to edge The Moores one ahead.

Alan Igoe had the sides level with a fine free and a minute later edged his side ahead with another free, it was a lead Raheens carried into the break 1-4 to 0-6.

Moorefield came out with all guns blazing and looked to have found the Raheens net when a lovely ball from Aaron Masterson put Jason Philips (half time sub) in and he found the net. However referee called back play to award what could only be described as a dubious free which Éanna O'Connor converted, quickly added another to take the lead by one, all that within two minutes of the resumption.

Raheens introduced Paddy Woodgate and in attack down the left wing into the Kilcullen goal, Mikey McGovern found Liam Power and the big midfielder, who had an excellent game, powered his way through before planting the ball in the back of the net to lead 2-4 to 0-8 on 36 minutes.

Alan Igoe and Adam Tyrrell exchanged points before Paddy Woodgate put two between them on 41 minutes.

Sensing danger Moore-
field hit back with Adam Tyrrell and Jason Philips cutting the deficit to just one.

Back came Moorefield with two Adam Tyrrell points, but he did miss a difficult free.

Raheens were defending well but when Éanna O'Connor knocked over a 45 it left the minimum between them and that was the way it stayed, with Raheens deservedly gaining a vital victory that see them advance to the quarter final, Moorefield still finish tops and are also into last eight.