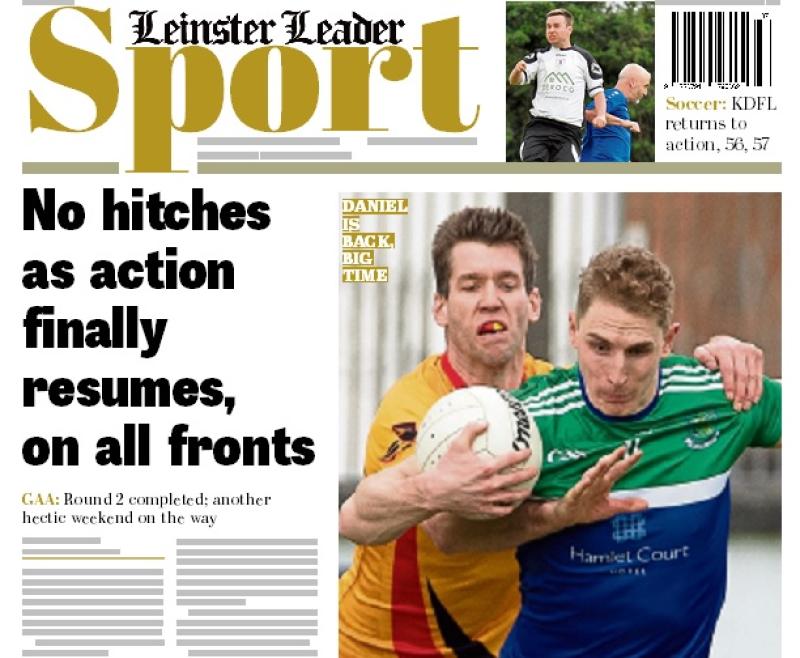 As Kildare GAA resumptions action on the field of play, we carry reports from every one of the 18 championship games, both football and hurling, senior intermediate and junior action.

As another busy week of GAA is under way all the fixtures, venues and times.

Golf: results and upcoming events from the Fairways plus picture special from Clane Captain's and President's Prize.

Greyhounds: Also in this week's edition, we carry Part 1 of a 2 Part feature on Newbridge Greyhound Feature; plus extensive report on another busy weekly meeting.

Racing: Amateur, Pat Taaffe, rides his first winner as we look back on the Kildare Racing News from the world of racing.

Soccer: with the resumption of action in the Kildare District Football League, we carry reports, results, fixtures, noticeboard including the Ace Sports Awards Masters Division 1 game between Maynooth Town and Newbridge AFC, along with KDFL Senior Division between Rathangan AFC and Naas United FC; along with extensive reports in our KDFL Senior Focus.