Kildare Rugby: Naas all set for another hectic season on all fronts

Fourth year in a row playing in AIL 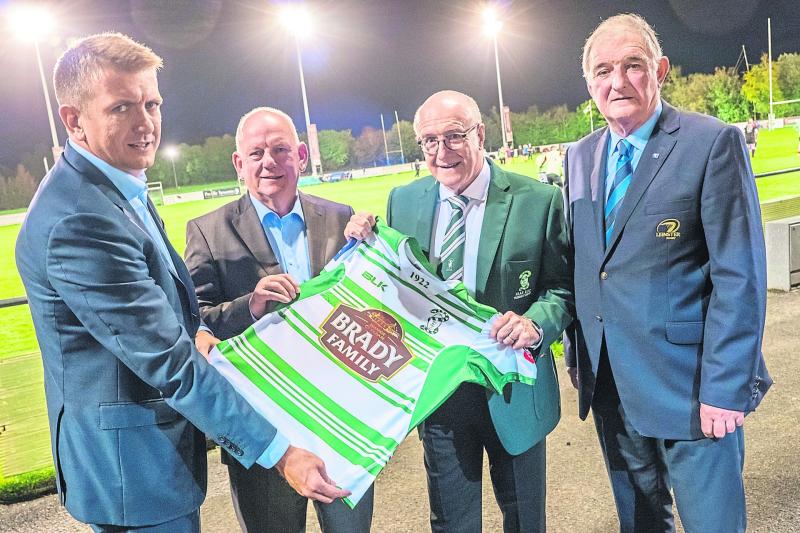 The wind was howling, the rain was coming down in bucketfuls as Storm Lorenzo threatened to make her presence felt but it did little to deter those on the training ground at Naas RFC last as the first team coaches were putting the final touches to their preparations for the club's opening game in the Energia AIL.
The occasion was a gathering of club officers, sponsors, various club officials, coaches along with local press for the club to initially express their thanks to their backers while giving all present an insight into all that is good at Forenaughts at present.
The informal gathering was addressed by Club President, Michael Higgins, who gave an overview of the wide ranging activities in the many sections of the club from the senior team, competing once again in the AIL; the J1s, J2s, U20s, a thriving women section and of course the Youths and Minis section which continues to grow and grow year after year.
Michael made it very clear, and on more than one occasion that Naas RFC is a community based club that represents the Greater Naas Community on an All Ireland basis, emphasising that the focus is on the development of rugby to the highest standards.
Michael said that Naas RFC is one of the biggest clubs, playing membership wise in the entire island of Ireland.
Adding that part of their successful plan was, and continues to be, to develop rugby in the Naas schools, reminding us all that Naas CBS got to the GAA All Ireland Schools final last year while the Junior Rugby team broke through glass ceilings getting to the quarter finals of the Leinster Junior Cup, great achievements indeed.
Michael thanked club sponsors Brady Family Ham for their continued support along with all the other various sponsors “who without the club could simply really exist.”
Liam O'Rourke, Club Treasurer said the club has a membership of 950, playing membership of 850, some-
thing he said that some of the older members in the club could never have envisaged while they were also about to embark on their fourth season at AIL Division 1B level, an incredible achievement that sees Naas rubbing shoulders with many of the top rugby clubs throughout the entire country.
Liam outlined the club's Five Year Development Plan, launched a couple of years ago and while much of that plan has been achieved there are still items that is hoped to complete very shortly including improvement of toilets, dressing room and clubhouse facilities but above all, an all-weather pitch “that would take a lot of pressure off our two main pitches.”
Richard Brophy, Director of Youth and Mini Rugby informed his audience of the growth in that section with 424 underage players in 2018, from U7 to 18s which come from 47 different schools in the area.
The Club has 56 Mini coaches, along with 27 Youth coaches, all accredited at the appropriate levels that they operate in; garda vetted etc, with a player-coach ration of 1:9.
There are only six clubs in the country, including Naas, that have women sections from Minis all the way up to senior, so there is little doubt that the work that Naas is doing at all levels is immense and up there with the best clubs in the 32 counties.
Gary Rohan, Director of Senior Rugby at the club gave an outline of his role and all the challenges that the senior section faces year on year stating that playing in the AIL for the fourth year is immense, but adds that one of the greatest challenges is holding onto senior players, as many move on a yearly basis, adding that “he and his coaches are happy with the many new and young players that will be lining out in the AIL this season, emphasising that while it will be a challenge he feels they are ready for the season that lies ahead, are well prepared and really looking forward to the action which gets under way this weekend.”
Dan Van Zyl, Club Head Coach emphasised that the skill level at the club is his big focus and he continues to work on that, as do all the coaches at the club.
All in all there can be little doubt that Naas RFC have made enormous strides over the years both with their facilities; their growth in membership has been phenomenal at all levels but particularly at Minis and Youth level while the club continues to make major impact at J1, J2 and Senior, especially in the AIL.
As they embark on their fourth season in Division 1B they are wished all the best as they lock horns with some of the top rugby clubs throughout the land.
While Storm Lorenzo may have failed to make its expected impact on Thursday night last (certainly in this area) one feels that when it comes to impact in the 2019-20 season Naas RFC will not be found wanting in that regard at all levels of the game.

Naas lost their initial game in the Energia AIL going under 13-7 to Armagh. They player their second game tomorrow (Saturday October 12) at home in Forenaughts against Old Wesley, 2.30.