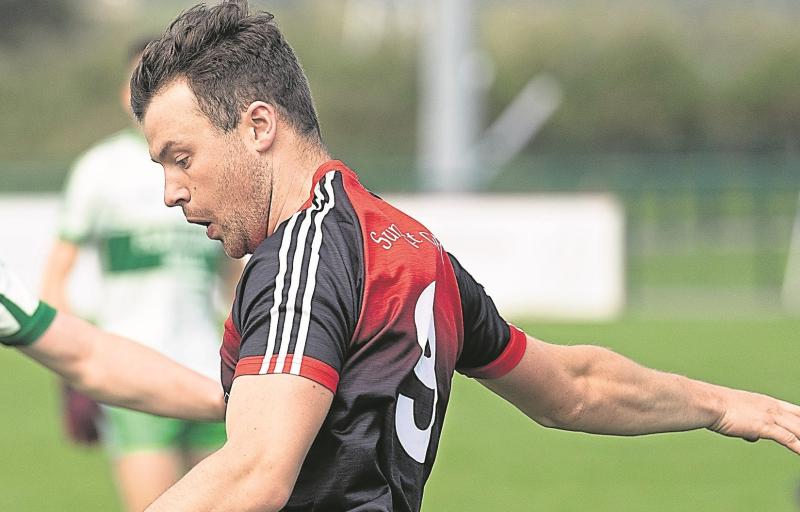 Fionn Dowling, on the mark of Suncroft

Suncroft retained their intermediate status following an extra time win over Kill in the delayed relegation semi final at Hawkfield on Monday evening.

The game started frantically and after 12 minutes the sides were level at 0-4 apiece.

Kill began to dominate the centre winning successive kick outs as they took the lead in the 16th minute with two quickfire scores from Paul Kirwan frees. I

Fionn Dowling strided through the heart of the Kill defence, before releasing the ball with a sumptuous handpass to Jack doyle who arrowed the ball superbly into the kill net, 1-4 to 0-6 for Suncroft.

Kill’s dominance in the middle became thwarted as Suncroft’s momentum grew. Five points without reply Kill conceded needless frees proving costly at the hands of Fionn and Ciaran Dowling 1-9 to 0-6. Kill found their rhythm again through a spinning Kirwan under pressure who managed to sail the ball between the posts bringing the half to a close Suncroft 1-9 to Kills 0- 7.

The opening of the second half left the contest flipped on its head, 34 minutes in a Fionn Dowling footblock gifted Kill a penalty. Kirwan slotted the ball home into the right bottom corner leaving it, 1-09 –to 1-7.

Immediately Suncroft fired back with an attack of their own, with Lawless winning a mid-range free, Fionn Dowling again made no mistake in extending his side's lead. Another point followed in favour of Suncroft as they took a four point lead 1-11 to 1-7 on 40 minutes.

In the 41st minute Eoin Lawless picked the ball up on the right hand side before voyaging on a magical run leaving the resilient Kill backline helpless before unleashing a thundering finish, 2-11 to 1-7.

Cian Lawlor reduced the deficit with a point before a slip at the back granted Kill a free reign on goal capitalised on by Kirwan, leaving just three between the sides on 48 minutes, 2-11 to 2-8.

Kill hit back to level and force the game to extra time.

The sides were level on three occasions in extra time before Suncroft finally got to grips and put a bit of day light between the sides, Ciaran Dowling on the mark. Kill did reduce the lead back to one but The Croft hit the final four points of the game to take the honours on a final score line of Suncroft 2-20 Kill 2-16.