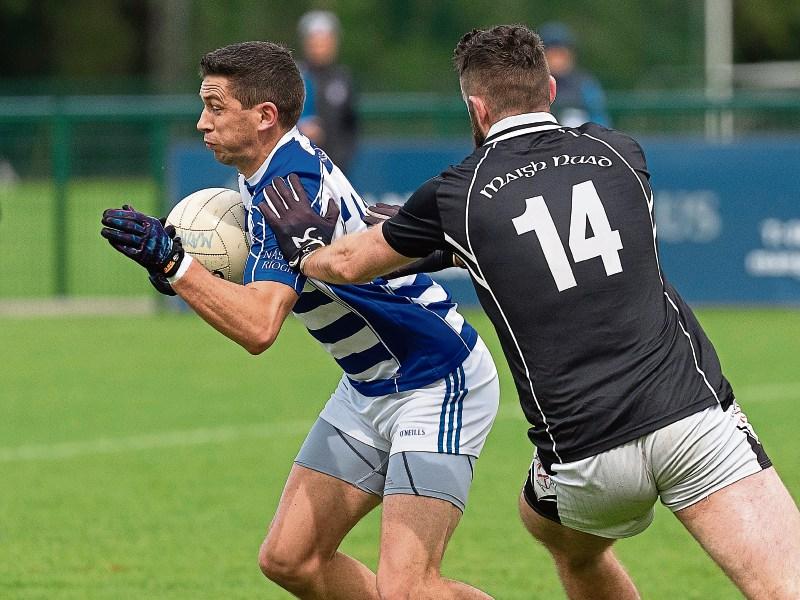 The phoney war has finally come to an end after a plethora of meaningless games over the weekend that were very sparsely attended, very understandable it has to be said, with little at stake as fans voted with their feet to stay away.

And with no shocks, few surprises and at times teams just going through the motions as they looked forward to either a provisional quarter final, a quarter final proper or in a few cases, a relegation semi final.

It really is time for the county board to take another look at the present system that saw the various championships get under way back in April and now here we are in the first week of September, evenings beginning to close in; conditions expected to deteriorate as the take the first tentative steps into the business end of affairs.

This weekend sees action at both St Conleth's Park and Manguard Plus COE in Hawkfield.

Speaking of Hawkfield one has to wonder if different rules apply between that ground and St Conleth's Park.

Not for first time officials have been thin on the ground, match officials that is, in Hawkfield and while one game was held up due to a mix-up over the appointment of a referee (in fairness a very rare occurrence) with a no show by an official it is a lack of linesmen and umpires that suggest Hawkfield is treated as a second rate venue that for some strange reason seems to get less priority when it comes to championship action.

Leaving aside the genuine mix-up over who was to officiate at the Carbury v Raheens game, having club officials, from competing clubs at that, officiating at games that can decide relegation and/or promotion is simply not good enough.

It does not happen in St Conleth's Park so why does it happen in Hawkfield I wonder to myself.

Over the past fortnight we have attended games at Hawkfield when there was no score board in operation, hardly the way to promote the game and especially not acceptable at championship level whether it be senior, intermediate or junior.

It is something that needs to be tackled urgently and clubs need assurance that for the rest of the championship season a full compliment of match officials will be in attendance at all future games.

As we said at the start the phoney was is over we are now down to winner takes all action.

Do you know what or get off the pot.

Championship football like it used to be; the winner progresses, the losers look back at what might have been, what should have been or whatever.

Still believe it is very strange that teams that have lost two games are still alive, still kicking and still in with a chance of ultimate honours.

Highly unlikely yes, but at the same time they are still competing nevertheless.

So who are the main contenders at this stage.

Are there any new contenders, any teams that were not considered in the running for honours before a ball was kicked in anger back in April.

The answer to that is an emphatic no.

We may, could and possibly will get a shock or two before we reach the finals, especially at senior level, but it still very difficult to look beyond the four big clubs that were on everyone's lips at the start of the campaign.

Champions Moorefield, although not firing on all cylinders; town rivals Sarsfields, Athy and Celbridge look to have it between them.

Of the rest only Johnstownbridge look like they might mount a challenge but then they are lacking in consistency and possibly belief and without either the chances are slim.

Champions, Moorefield are in action this Saturday against Clane as they bid to make it to the quarter finals and while they are still looking for their top form it would be a surprise if they were to lose out at this stage.

Johnstownbridge, well beaten by Athy last week, are also in action this weekend where they will take on Carbury who have shown both sides of their form and while this writer is loath to say The Bridge will win they really should on this occasion.

Of the other strong contenders for ultimate honours Athy are really catching the eye at present. They are playing well, are very well organised, strong down the middle and possess scoring threat from a variety of players.

Sarsfields are building steadily. Davy Burke must be delighted with his charges at present it will be interesting to see who they draw in the quarters and that's for sure.

Celbridge are the other big name moving along nicely. They had a comfortable win over Confey last week and even allowing for the fact Confey were extremely disappointing, Paul Curran has his side moving impressively, scoring well and overall playing some very decent football.

No disrespect to any of the remaining sides but it is difficult to see any of theses clubs making any real impression.

Then again we have been know to be wrong before.

The IFC is shaping up nicely also a few teams looking more than decent here, particularly Monasterevan, Allenwood and of course Leixlip but this is one grade that can throw up a winner from under the radar.

Not sure if that will happen this time around but for now we can look forward to this weekend's preliminary quarter finals at both senior and intermediate level.

Phoney war is over.

So let's get on with the real action!