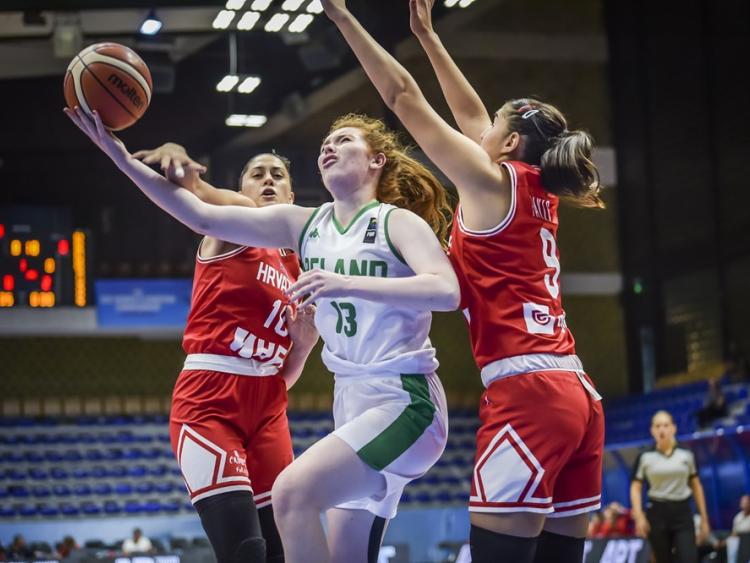 There was big disappointment for the Ireland Under 20 women’s team yesterday afternoon as they lost out to Bulgaria 68-58 in the semi final of the FIBA U20 Women’s European Championship Division B in Kosovo.

The team features two Kildare players - Claire Melia (Portlaoise Panthers) from Monasterevin, who is captaining the team and Sorcha Tiernan who plays for Courtyard Liffey Celtics in Leixlip.

The loss now puts Ireland into a bronze medal play off today against Great Britain. Tomorrow’s play-off game is a winner takes all affair, as the winning side will not only secure a bronze medal, but will also earn promotion to Division A basketball for next summer.

It was a game of fine margins this afternoon though, as despite a phenomenal performance from team captain Claire Melia, who finished out the game with 22 points, 15 rebounds, three assits and three blocks, it just wasn’t enough in the face of an extremely quick and sharp shooting Bulgaria.

Point guard Karina Konstantinova dictated the pace at the top of the key, and added 11 points for her side, but dagger threes from Viktoria Ivanova and Yanina Todorova as well as a strong performance from top-scoring Denitsa Petrova proved to be the difference in the end.

Trailing 34-29 at the half time break, Ireland came out of the blocks all guns blazing in the third quarter, with two huge scores from Sorcha Tiernan and a massive finish from Claire Melia sending Ireland into the lead. A quick time out by Bulgaria saw Todorva respond with a big three and this was to be the nature of the third quarter – each time Ireland managed to close the gap back, Bulgaria responded with killer three pointers. Despite the best efforts of the women in green, it wasn’t to be in the end, and they lost out 68-58.

Speaking afterwards, head coach Martin Conroy said: “I’m not feeling too great after that to be honest. I thought we had our homework done and we were ready to go. The girls really put in a huge effort like they always do this is a very special group of girls we know. It’s going to be tough now to face into another game tomorrow, but that’s the job we have to do and we’re going to pick ourselves up now and get ready. To get a bronze medal and promotion would be a huge thing for this team.”

Ireland will play Great Britain and Finland at 3.30pm while is being streamed live from the Basketball Ireland Facebook page.