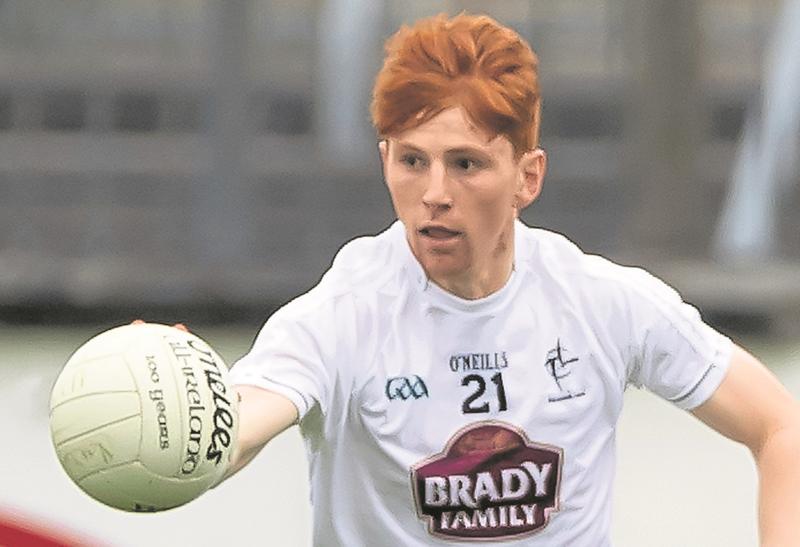 Niall O'Sullivan, lined out at corner back for Kildare U20s v Cork

Kildare U20 footballers suffered their third defeat in three games on Wednesday evening when going under to Cork by a single point in a game played at the picturesque setting of Canon Kearns Park, Castlecomer, Co. Kilkenny in this U20 league.

Not for the first time in this campaign The Lilies went behind early on before settling and putting in an encouraging second half performance.

Cork dominated from the throw-in and led 1-4 to no score after just 12 minutes.

By half time that lead had branched out to 1-9 to 0-2, the two white flags coming from a Luke Griffin free and a point from play from Darragh Kirwan.

On the resumption, Kildare upped their game considerably taking charge and while Cork extended the lead on 32 minutes The Lilies hit back with three points before Jack Cully found the Cork net.

The boys in red were rocked at this stage and another goal, this time from Adam Steed in the 54 minute, left just one between them on 54 minutes.

Sean Cullen had the sides level with a minute of normal time left; Cork regained the lead but Paidi Behan leveled the game on 63 minutes. However, a minute later Cork hit back with only their third point of the second half from Mark Hodnett to clinch victory on a final score line of Cork 1-12 Kildare 2-8.

Kildare have one game remaining in this league before opening championship campaign against Laois, when they take on Kerry this Saturday in Thurles, throw-in 1 pm.