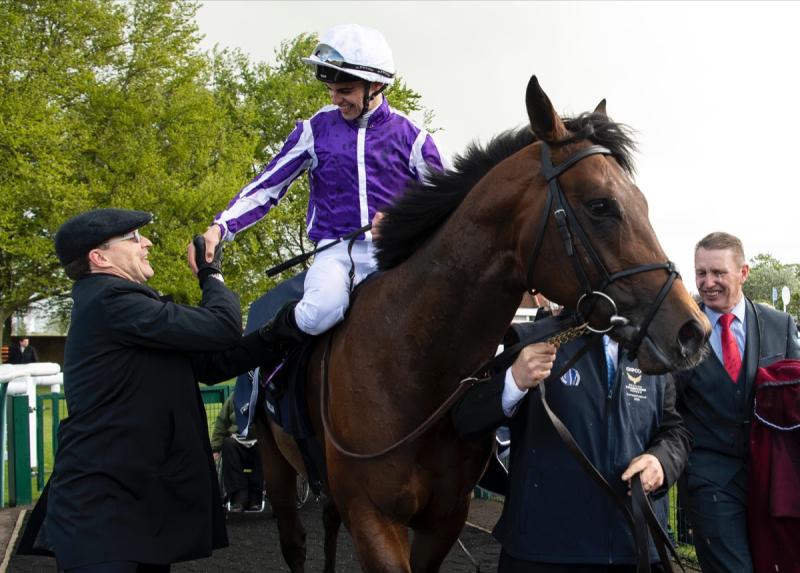 The Tattersalls Irish 2000 Guineas is already shaping up to be one of the races of the season with the 2000 Guineas winner Magna Grecia and last season's champion European juvenile Too Darn Hot on course to clash following today's declarations.

A field of 14 will go to post for the opening Classic of the season which features four English-trained runners in total. Too Darn Hot is a star attraction in the field and will be ridden by Frankie Dettori, while Mohawk, Old Glory, Van Beethoven and Globe Theatre join Magna Grecia on the Ballydoyle team for the race.

The William Haggas-trained Skardu comes to the Curragh having placed third behind Magna Grecia in the 2000 Guineas at Newmarket, while Charlie Hills is set to unleash Phoenix Of Spain for his first start of the season. The latter was a narrow runner-up to Magna Grecia in the Group 1 Vertem Futurity Trophy Stakes last season.

Haggas said earlier in the week: "It is a rematch and a lot has been made of the Guineas at Newmarket but I still think that the best horse won on the day there. I do believe that Magna Grecia was in an advantageous part of the track, but I do think he would have won wherever he'd have been that day.

"Skardu is in very good form and James Doyle will take the ride. We had good days at the Curragh last year and it would be nice to continue this season."

While Hills commented: "We feel that the Curragh is going to suit Phoenix Of Spain very much and the trip will suit him. I think he has got a very good each-way chance in the race."

Kevin Ryan, who will saddle East in Sunday's 1000 Guineas, begins his assault on the Curragh with Emaraaty Ana.

Dermot Weld has enjoyed a fine start to the current Irish Flat season and the master of Roswell House is relying solely on Shelir who has won both of his starts this season.

The Aga Khan-owned colt was an impressive winner at the Curragh over seven furlongs last time out and will be ridden once again by Chris Hayes.

“I’m delighted with Shelir,” Weld reported. “He is a straightforward colt, he is a good-actioned horse. He has had no hold ups so we are all set and looking forward to running him in the Guineas at the weekend.”

Another Curragh-trained contender is the Michael O'Callaghan-trained I Am Superman who is already a two-time winner this season.

Also featuring in the first Irish Classic of the season is the Paddy Twomey-trained Decrypt who booked his place in the race with a facile win at Cork last month and would be bidding to give the in-form trainer the biggest success of his short training career.

"Decrypt beat some smart winners at Cork last month. He travelled through the race well and quickened away and did it within himself. It was a nice comeback for him and the logical next step for him is to step up in class,” stated the trainer.

“He’s rated 105 after three starts and he’s in very good form. He’s on target for Saturday, he’s well in himself and he’s ready,” added Twomey.

Aidan and Donnacha O'Brien won't be the only father and son duo to team up in the feature event at the Curragh this Saturday. Trainer Tom Cleary will leg up his son Rory aboard Hillwalker as the aptly named Dream Big Syndicate that own the son of Foxwedge look to turn their initial €3,000 investment into Curragh Classic success. Jim Bolger will be teaming up with his son-in-law Kevin Manning as Guaranteed goes to post for the Coolcullen team.

Tattersalls Irish Guineas weekend begins with racing on Friday evening when the first race is due off at 4.55pm. The feature race on Friday is the Group 3 Kerrygold Gallinule Stakes which has attracted a field of seven.

Bold Approach is a fascinating runner in the race as he makes his seasonal debut for trainer Jim Bolger. The son of Dawn Approach was last seen when chasing home the leading Epsom Derby hopeful Anthony Van Dyck. Bolger is aiming for a first Gallinule Stakes success since Project Manager in 1988.

Racing on Saturday starts at 1.50pm with the Tattersalls Irish 2000 Guineas off at 3.35pm. Patrons will have the opportunity to meet legends of the sport Lester Piggott, Michael Kinane and Pat Smullen before racing on Saturday while on Sunday you can experience the spectacle and pageantry of the official opening of the new Curragh by An Taoiseach, Leo Varadkar at 3pm.

The ground is currently described as good to firm on both tracks at the Curragh with watering continuing.

Details of admission prices and discounted offers can be found at www.curragh.ie. Children under 18 that are accompanied by an adult go racing for free.