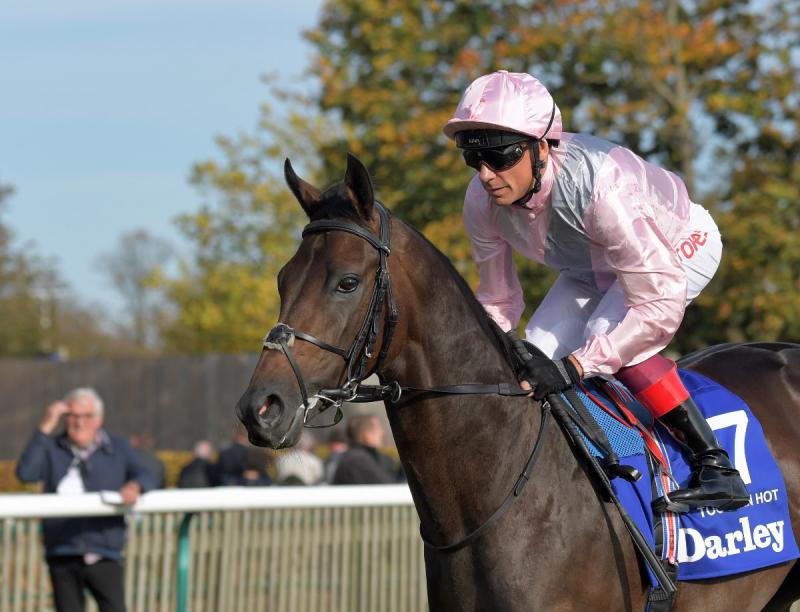 Too Darn Hot heads a powerful five strong challenge from across the Irish Sea for Saturday’s Tattersalls Irish 2000 Guineas at the Curragh.

In a positive development on this morning it was announced that Too Darn Hot could square off against the English 2000 Guineas winner Magna Greciajust nine days after his comeback second in the Dante Stakes at York.

One horse who will definitely be travelling for another crack at Magna Grecia is the William Haggas-trained Skardu who followed up a victory in the Group 3 Craven Stakes last month with a fine third in the 2000 Guineas.

"Skardu had a spin this morning and we are all set to come over to the Curragh providing the weather stays fine," Haggas reported.

"It is a rematch and a lot has been made of the Guineas at Newmarket but I still think that the best horse won on the day there. I do believe that Magna Grecia was in an advantageous part of the track, but I do think he would have won wherever he'd have been that day.

"Skardu is in very good form and now I just hope that he takes the journey well and the ground stays dry. James Doyle will take the ride. We had good days at the Curragh last year and it would be nice to continue this season."

Another formidable English challenger is the Charlie Hills-trained Phoenix Of Spain who will be making his first appearance of 2019. The Lope De Vega colt ended last season with two excellent efforts, chasing home Too Darn Hot in the Group 2 Champagne Stakes before losing out by a head to Magna Grecia in the Vertem Futurity on his final outing.

"We are looking forward to running Phoenix Of Spain on Saturday. We feel that the Curragh is going to suit him very much and the trip will suit him. I think he has got a very good each-way chance in the race," Hills said.

"His form looks rock solid and that is always encouraging to see."

Aidan O’Brien reports Magna Grecia to be in good shape as he bids to make it three Group 1 victories on the spin and he could be joined in the line up by Group 2-winning stablemates Mohawk and Van Beethoven.

Shelir will represent Dermot Weld after making it two wins from as many starts in the Listed Tetrarch Stakes at the Curragh several weeks ago. Shelir will bid to emulate the former Rosewell House inmate Flash Of Steel who did the Tetrarch-Irish 2000 Guineas double back in 1986.

Once again there is a strong English presence here the Roger Varian-trained Qabala being supplemented for the race this morning.

Bell said this morning: "It is all systems go for Pretty Pollyanna to run in the Tattersalls Irish 1000 Guineas and we are very much looking forward to her seasonal debut."

"Frankie Dettori has been booked to ride," Bell confirmed. "We feel that there is every chance of her getting the mile a bit better this year now that she is a year older and we'd be hopeful of being involved at the business end. It is a good time to have runners when the yard is in good form. We won a Classic at the 'old Curragh' so we now want to win a Classic at the 'new Curragh' as well."

Trainer Kevin Ryan is also set to field the recent French 1000 Guineas third Eastin what looks to be one of the strongest British challenges on Irish Guineas weekend in some time.

Iridessa, who won last year’s Fillies Mile, and the smart Paddy Twomey inmate Foxtrot Liv complete the line up for the fillies classic.

The Group 1 Tattersalls Gold Cup is set to be an all domestic affair with the field headed by Magical who has carried all before her on her first two starts this season. The four-year-old is among four Aidan O’Brien entries which also include last year’s Irish St Leger hero Flag Of Honour and the recent Grade 1 Man O’War Stakes third Magic Wand.

Patrons will have the opportunity to meet legends of the sport Lester Piggott, Michael Kinane and Pat Smullen before racing on Saturday while on Sunday you can experience the spectacle and pageantry of the official opening of the new Curragh by An Taoiseach, Leo Varadkar at 3pm.

The ground is currently described as good to firm, firm in places with watering taking place.

Details of admission prices and discounted offers can be found at www.curragh.ie. Children under 18 that are accompanied by an adult go racing for free.