Kildare take on Tipp in vital AFL clash on Saturday 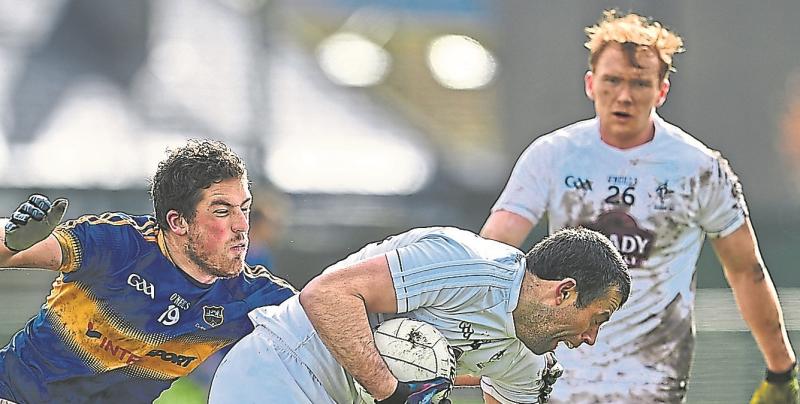 Saturday and a double header with the Ladies certainly makes Round 6, the penultimate round, of the Allianz Football League, something unique.
It's a great opportunity to give the Ladies some extra support against Meath; pity it's not a Sunday game but we can't wish for everything now can we.
So the boys from Tipperary will be in town on Saturday, just thinking if all the Tipp natives, now living in Lilywhiteland, turn up on Saturday to St Conleth's Park, Newbridge, it would certainly make for a mighty atmosphere.
Then again, a lot of the folk attached to the Blue and Gold would see the big ball game as not really their game, more tuned in with the sliothar but sure maybe come the weekend they might give their native county a bit of backing.
And the mind takes a ramble ...
A ramble to a venue the last time we played Tipperary. It was in a place that goes under the name: The Sports Field, and is situated in Clonmel, and not to put it too bluntly it was what is says on the tin, a field.
Now I know us Kildare folk have no real right to be complaining about any ground as St Conleth's Park could hardly be described as luxurious (hopefully that will all change in the not too distant future) but the facilities we met, players and supporters alike, that day were to be brutally honest and frank, nothing short of a joke; and when you think Semple Stadium is such a fine venue, but not available for the senior footballers of the county, that day at least.
It was back in March 2016 when The Lilies made that journey south. It was during our stay in Division 3 of the AFL, thankfully it was a one season wonder as, along with Clare, Kildare left the division, and The Sports Field, all but a distant memory.
The Lilies came out on top then and while the final score line (2-13 to 1-5) looks somewhat convincing, the game itself was a lot closer than that final score line suggests.
For the record the Kildare team that lined out that day was:
Mark Donnellan; Peter Kelly cpt., Ciarán Fitzpatrick, Ollie Lyons; David Hyland, Fergal Conway, Cian O’Donoghue; Kevin Feely, Tommy Moolick 0-2; Adam Tyrell 0-3 (1 free), Niall Kelly 1-0 , Eoghan O’Flaherty 0-3 (45, one free); Daniel Flynn 1-2, Paul Cribbin 0-2, Eamonn Callaghan 0-1. Subs: Johnny Byrne for Fergal Conway (blood sub 31-36 minute); Johnny Byrne for Cian O'Donoghue (half time); Pádraig O'Neill for Daniel Flynn (58 minutes); Alan Smith for Adam Tyrrell (65 minutes); Kevin Murnaghan for Fergal Conway (67 minutes); Rob Kelly for Paul Cribbin (72 minutes).

Saturday's game, like all games in this division, is another vital one; win, and depending on how the other results work out, The Lilies could be right back in it.
Lose and all of a sudden you are looking at the wrong end of the table; so it's not rocket science to say that a win is vital, for more reasons than one.
Following the disappointing loss to Meath in Navan, there has no doubt been a lot of soul searching.
Remember the opening half Kildare looked sharp; looked in control and looked like they would record a win that could have seen them right up there at the top of the table.
What happened in the second half though was both disappointing and to some degree somewhat worrying.
Of course we have to take in the conditions but they were the same for both teams.
Of course we have to take into consideration that we lost Ben McCormack before half time (huge loss); before losing Eoin Doyle; before losing Mark Donnellan and with Cian O'Donoghue practically on one leg for most of the game, the options suddenly became worrying and with the late penalty goal, the black card for Keith Cribbin, following on an earlier back for Mick O'Grady; everything seemed to unravel.

Unfortunately Ben McCormack has been ruled for Saturday, following that hand injury that forced him off against Meath, the Sarsfields man will be out for between 6 and 8 weeks, which is a real blow, both to Kildare and indeed the player himself, who has been extremely unfortunate with injuries over the past few seasons.
On the plus side, Chris Healy and Kevin Flynn both came through a friendly against Ros-
common on Saturday last and will be available for selection but with so little game time under their belts, maybe a place on the bench is the best they can expect. Incidentially reports suggest Adam Tyrrell, who came on mid-way in the open-
ing half was excpetional scoring five points against The Rossies.
The other walking wounded from the Meath game, Mark Donnellan, team captain Eoin Doyle and Cian O'Donoghue are all expected to resume training this week and be available for selection.
One point in the second half against Meath, regardless of the situation; regardless of the injuries and regardless of the deteriorating weather, was simply deplorable.
Most folk will look at the men up front but in fairness, while The Lilies did carve out two, maybe three, scorable opportunities, the problem, in this writer's view, lays further back in the field. You can have the best forward division in the land but if you cannot get the ball up to them; if they don't receive the supply, there is very little impact they can make.
Kildare, as we said, played some of their best football in that opening half in Navan but let's not forget they did exactly the same against Clare the previous week, scoring 1-10 in the opening half.
Yet the boys from The Banner got right back into that game, reducing the deficit to three at one stage and while Kildare did up their game, took charge again and won well in the end, nevertheless their is a worry that Kildare are not 'getting home.'
Are some players not seeing out the full 70+ minutes?
It is not today or yesterday that we have seen such happenings, but it is something that we felt had been eliminated from their game, that is playing in fits and starts; looking good; looking like things are in control only to let the opposition back into it.
If progress is to be made those traits have to be banished and banished instantly.
As we face into Saturday, top of the table are Meath and Fermanagh with eight points; followed by Donegal on six; Kildare on five; Armagh four with Clare, Tipperary and Cork on 3.
This weekend's fixtures, apart from Kildare taking on Tipperary will see Clare take on Meath; Cork play Donegal while Armagh will play Fermanagh.
While a week later in the Round 7 and the final round of this season's League Kildare travel to Donegal; Armagh play Cork; Meath v Fermanagh while Tipperary are at home to Clare.
So still a lot of football to play yet but a win for Kildare on Saturday is imperative, regardless of what way the other games pan out.
We don't want to be heading to Donegal the following week looking for a win to possibly stay afloat now do we.