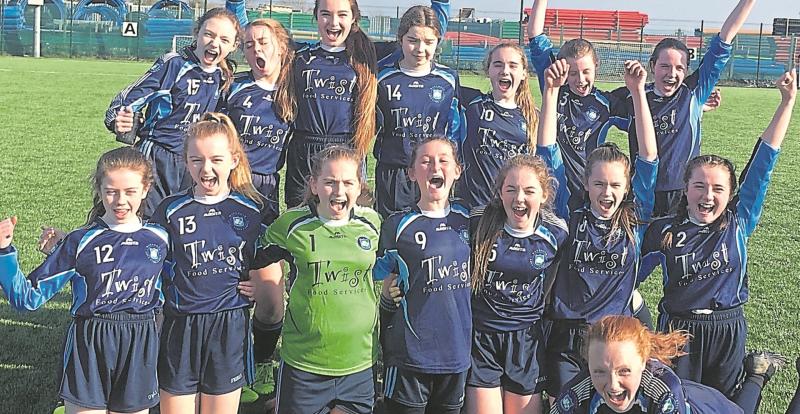 Maynooth PP 1st Year girls made history in Peamount when they overcame a strong St. Josephs, Lucan team to reach their first ever Leinster A Cup final, winning  2-0.
The girls had their tails up from the start and it was clear from the whistle that they were on a mission. They gave no time or space to the Lucan girls and enjoyed the majority of possession in the opening 15 mins, but found it hard to break down a tough Lucan defence.

Sinead Coyle and Sian Ryan worked tirelessly in the centre of the field, attacking and setting up play for Anna Kelly and Aoife Richardson up front. Great runs from Anna Burns and Emily Walls made life difficult for the opposite and eventually the break through came in the 17th minute, when Richardson found the ball at her feet and with some quick foot work made space to hit the ball low and hard into the bottom right hand corner. The Maynooth girls kept up the pace and Lucan were lucky to only be 1-0 down at half time.

Lucan tried to rally in the second half but had no luck due to the tenacious defending from the back quartet of Leah Conway, Aoibheann Price, Emer Gillespie and Sophie McLoughlin.
The MPP girls continued to attack, applying constant pressure, and found their just reward when Coyle riffled a shot into the roof of the net to make it 2-0 in the 40th minute.
St. Joesphs looked like they might grab a late consolation goal when their No.10 broke through one on one with the Maynooth keeper, however Niamh Richardson was not going to let that happen, she bolted from her line making a superb save to keep her teams’ clean sheet.

It was a super display from all girls involved and they now look forward to a Leinster Final against Presentation Wexford on Monday 11th March in IT Carlow - KO 11.30.