Result not in the Kildare script, just like some of the headgear

Experimental rules; upcoming games and headgear to the fore at The Downs 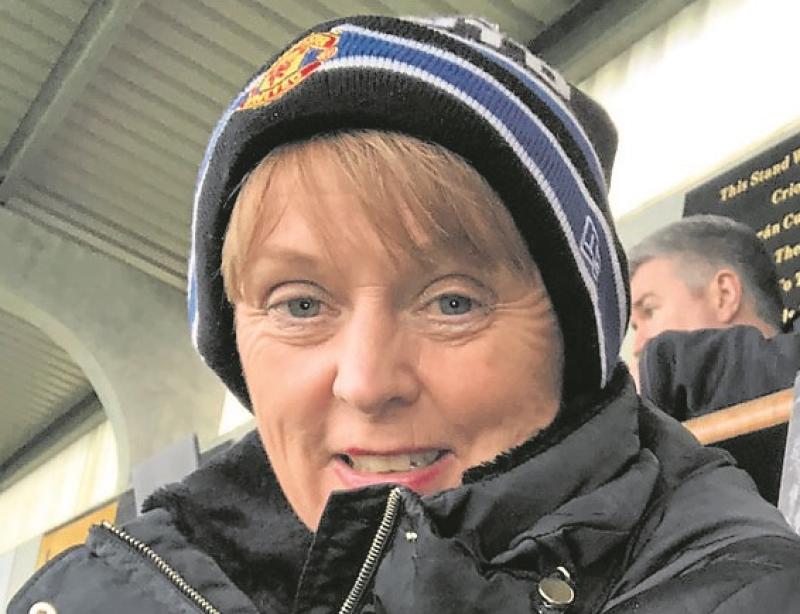 Supporting The Lilies against Westmeath, Caroline Murray from Newbridge

For many it was a first visit to the excellent facilities, including an impressive seated stand, to The Downs GAA Club, Mullingar, host to last Sunday's Kildare v Westmeath O'Byrne Cup Round 3 tie.
As we entered we immediately felt at home with many familiar faces in situ, as the drizzle turned into a heavier mist making conditions far from pleasant for both fans and players.
The first one we bumped into was Billy Dunne. Unlikely to be Billy's first visit to The Downs, and unlike most others, the bauld Billy was not sporting any head gear, instead just letting the wind and drizzle blow through that most distinctive of hair styles.
Billy, though, was not a happy camper. “They'll make us pay for that Mayo game” he said angrily.
Enquiring what his problem was needed little prompting as Billy asked did anyone see “our game against Cork has been
moved, again.”
Most in the vicinity shook their heads, some even wondering what game against Cork, much to Billy's disgust it has to be said.
“Our League game” he piped up; our second game in the League in early February he said; it was fixed for a Saturday night (Billy obviously had booked in for an overnight on the Banks of the Lee); they then changed it to a 12 o'clock throw-in on Sunday and now they have changed it again, to 12.30.
“I'm telling you all, they'll make us pay for Newbridge or Nowhere and it's not good enough” he growled, as only Billy can.
Meanwhile Ollie Doyle of Round Towers fame, arrived, looking fit, eager and well togged out with a wooly that would certainly not look out of place on the fairways of Cill Dara Golf course.
Ciaran and Caroline Murray, from Newbrige, were spotted taking up their seats in the stand.
Raheens native, Caroline (and sometimes Moorefield fan) was sporting, would you believe, no less than a Man United wooly.
“It was the only thing I could find in the boot of the car” she said instantly, fully aware we were about to make a comment.
Don't worry Caroline your secret is safe with us!
Meanwhile former Clongorey great and Sarsfields man Camillus Walsh, recovering from a major bout of man flu that put him out of circulation over the Christmas, was in a 'belt and braces' mood in order to avoid a relapse, refusing to take down his brolly until in a seated position at the back of the stand.
Taking no chances. For once.
As for the game, well, after team captain Eoin Doyle won the toss and decided to play into the dressing room end, it was about the only thing The Lilies won on the day.
The boys in white, despite leading by a point at the break, looked tired, jaded and out of sorts.
Despite lining out with just three that started last season's final game against Kerry, it was a disappointing performance and one manager O'Neill was not overly happy with, despite admitting that his squad have been going through a very tough pre-season campaign.
This result was never in the script, but then again, neither was some of the headgear on view.
As for the new experimental rules, well I can tell you whatever about the players, management and everyone involved with Kildare and Westmeath, members of the media who were present seemed almost obsessed with them.
Before the game, during the game and after the game, it was practically nothing but 'the rules.'
Incidentally manager O'Neill said, despite what has been said and written about his views on the rules, insisted he had never endorsed them in the first place.
“I would have been strongly against the rules coming in myself, but once they came in I just said 'ok let's get on with it.' Adding “what I meant was I was excited because it was a challenge from a coaching perspective, that was my attitude from Day 1.”
There is no doubt the rules are going to have a major impact as games unfold and it will indeed be very interesting to see what the final decision (by Central Council) will be prior to the commencement of the league in late January. The jury is still out but one thing is for sure, as it stands fans better get prepared for more back passing (or kicking) than they have seen heretofore.
In the meantime, Billy Dunne will be keeping us fully informed of any day, venue, time or any other changes made prior to that trip down south while the odds of Caroline Murray appearing in a Man United wooly at Kildare's next game have lengthened considerably!