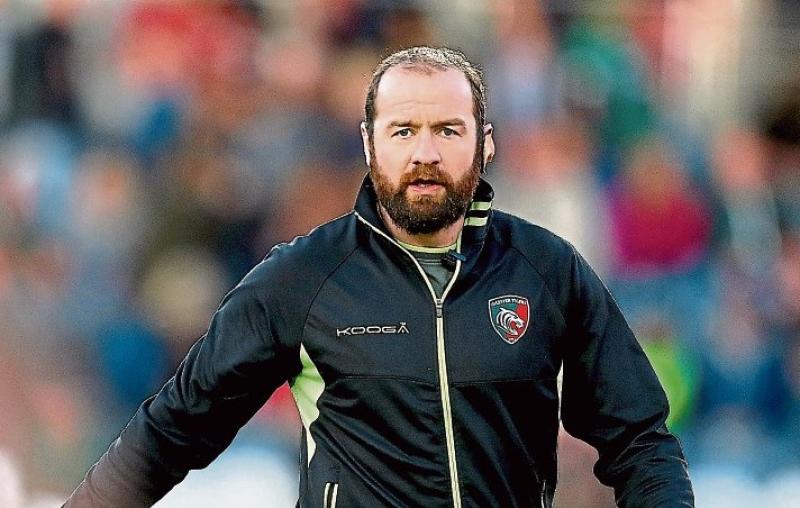 Newbridge College Past Pupils Association has congratulated Naas native, Geordan Murphy on his appointment as head coach at Leicester Tigers after holding the position on an interim basis since the opening of the season.

Leicester made the announcement yesterday.

"An eight-time Premiership champion after joining Tigers in 1997 and a double European Cup winner, Murphy scored 93 tries in 322 games for the club before joining the coaching staff in 2013. He also represented Ireland 72 times and played in two Tests for the British & Irish Lions," said the club.

The club's website quoted Murphy as saying; “It is a huge honour to be asked to be head coach at a club I know so well."

“This club means a lot to me, I’ve been here a long time and we all want to enjoy success with the Tigers.

“For me, performances on the field begin with the pride, passion and commitment you want to see from a Leicester Tigers team. It is about that passion for the shirt.

“A Leicester Tigers team is built around the beliefs of working hard for each other, everyone being a team player and also about having a real intent and integrity about what we do. These are base-level principles. That is what passion on the field looks like to me.

“Peter Tom and the Tigers Board have been very supportive of me. They’ve told me that whatever we need, they will support. The coaching team and the players have been very good since I was given the opportunity.

“We’ve had a challenging start to the season and we are working hard to improve performances and results, but this is also the start of a journey for this coaching team and playing group. There is a lot of quality there and we still have everything to play for this season.

“We are looking at how and what we can add to the coaching team in terms of experience and quality, and it has to be the right fit for the team.

“The supporters can play their part on that journey too and we hope they will be with us all the way.”

Club chairman Peter Tom CBE added: “Geordan has his beliefs on what makes Tigers tick and how he wants that to work at Oval Park and at Welford Road, and we are delighted to be able to plan for the future with him as our head coach.

“He knows this club as well as anyone, as a player over 16 years here and now in five years as a coach. Although recent results have not been at the level we all expect, Geordan’s leadership, enthusiasm and hard work during a challenging period have impressed us all.

“Geordan has his own vision of how to get the best out of the coaches and players around him, and now is the time for everyone to work together to help his plans come to fruition.”

Geordan played minor football with Kildare and also lined out for Naas GAA.