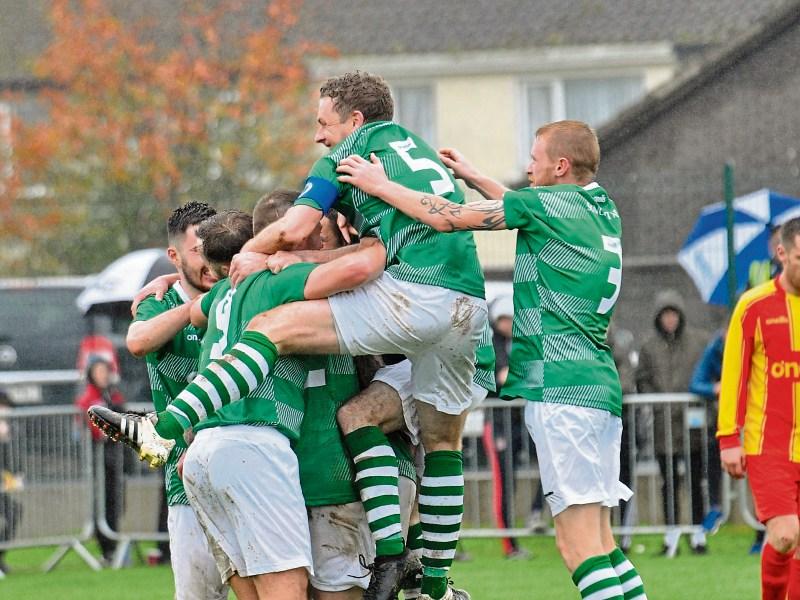 Suncroft AFC retained the coveted KDFL Lumsden League Cup following a 3-1 victory over Ballycane Celtic at the Community grounds in Suncroft back at the start of October, becoming only the second club in the League’s history to do so.

It is indeed a brilliant achievement and the winners put Ballycane Celtic under pressure almost from the kick-off.

The first real chance of the game came Suncroft's way when a Dylan Connolly free kick which deflected off a Ballycane head to spur keeper  Keith Higgins into fine early save; that after just eight minutes.

Ballycane had a half chance themselves on twelve minutes when Stephen Quinn was the first to react to Dean Loughran throw in but pulled his shot wide and into the side netting.

It was Suncroft’s Dylan Connolly again who produced a marvellous little turn to find himself advancing on the Ballycane goal after skipping past two defenders he was finally brought down in the box by the skipper J.P Higgins.

No hesitation from the referee in pointing to the spot and up stepped Ray Coleman to expertly dispatch the kick past a stranded Higgins on 22 minutes to put Suncroft 1-0 up.

The Naas men responded instantly with crafty little passage of play be-
tween RobertHeavey, Chris-
topher Higgins and Keelan Noone culminated in  Jay Curran powerfully striking from twenty yards that just whizzed over the bar.

It was Kevin Higgins turn next as he galloped forward on an overlapping run but shot narrowly wide of ‘Croft keeper Kevin McDonnell’s left hand post on the half hour.

The game completely opened and the tempo was high with both side's playing some attractive football. It was Suncroft who would draw blood again after a fine dribble and low whipped cross by Gary Gazza Connolly and an audacious back heel finished by Darren Kilbey to double their advantage.

Both midfields nullified each other with some great tackles on either side. With the game stretched Mark Loughran and John Paul Higgins making some vital interceptions as did Doyle and Hanley for Suncroft.

A Keelan Noone free kick never really troubled the Suncroft goal on thirty eight minutes and that's as good as it got for the Ginger Maestro.

The last two chances of half fell to Kieran Morris of Suncroft who blasted over the bar from 20 yards on forty minutes . The ref then played a great advantage after Dean Loughran  crunched into JP McDonagh with a tackle. He allowed play to proceed and Morris looked certain to score but for another fine save for Keith Higgins in the Ballycane goal.

After regrouping Bally-
cane were much the quicker out of the blocks on the resumption. They looked to change the dynamics with some half time changes and it was all ‘Cane as J.P Higgins went close on three separate occasions but failed to make the break-
through.

Suncroft also introduced Daniel Dee and ballycane defenders Dean Loughran and Kevin Higgins had to be at their best to keep him at bay.

As the game progressed it was Suncroft who proved the more clinical. After a moment's hesitation in the ‘Cane defence and against the run of play it was Dee who sniffed out a half chance latching onto a soft back pass and he made no mistake from 12 yards in 65 minutes to put The Croft 3-0 up.

Ballycane introduced Liam Mullan and his impact was almost instant. After a bizarre misplaced pass from McDonnell Mullan was on hand to intercept for a simple tap in, Ballycane deservingly pulling one back to 3-1 on the 71 minute.

It looked like either team could score next. With Ray Coleman smashing a wonderful free kick off the Ballycane crossbar from 25 yards and again it was Dylan Connolly for Suncroft with a jinky run and reverse back heel to set Kilbey away but he shot wide of the keepers left hand post after a great move.

Ballycane sensing that time was slipping away absolutely peppered the Suncroft rear guard in the final minutes with a couple of half chances falling to Finnegan and Sean Farrell forcing McDonnell into two fine saves. It's was Suncroft who had the final chance as Kilbey pulled a ball across the box only for Keith Higgins to smoother.

The final whistle shrilled to jubilant Suncroft cele-
brations. Kilbey and JP Higgins had a momentous battle all afternoon both player's leaving everything on the pitch and Kilbey picking up the Man of the match award. The Loughran brother's, Farrell and J.P Higgins for Ballycane were excellent.

The Connolly brother's, JP McDonagh and Kilbey for The Croft excelled to see their side lift the trophy for the fourth time.