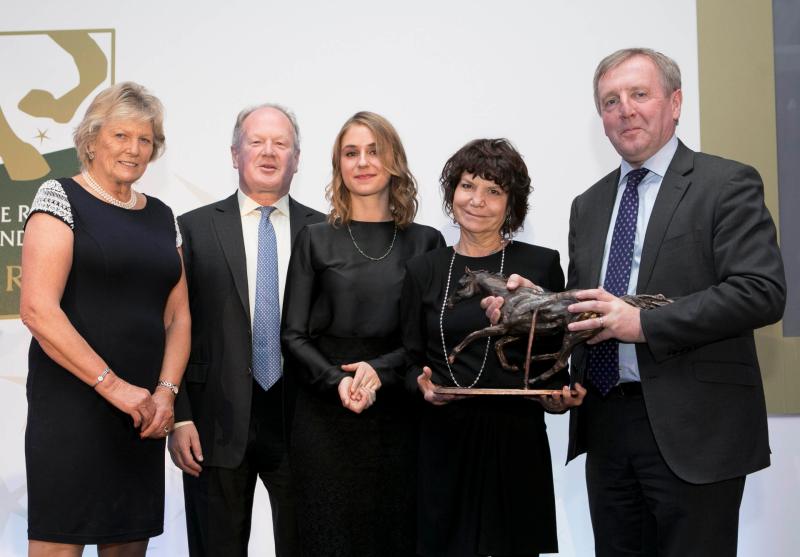 There were big wins for Kildare at the annual Horse Racing Ireland Awards yesterday.

Kill's Katie Walsh and her sister-in-law Nina Carberry, who brought the curtain down on outstanding careers with winners at the Punchestown Festival in April, were honoured with the inaugural Irish Racing Hero Award at the event in Dublin.

It was a fairytale night for women jockeys with one of the stars of the current jumps season, jockeys’ title leader Rachael Blackmore, also taking an award.

The winners in ten categories, including four new awards, were announced at a ceremony which was attended by many of the industry’s leading figures. Guest of honour was Minister for Agriculture, Food and the Marine, Michael Creed TD and guests were welcomed by Chairman of HRI, Nicky Hartery.

The winners of the 16th annual awards were as follows:

Irish Racing Hero Award winners Katie Walsh and Nina Carberry retired as two of Irish racing’s most celebrated amateur riders at the Punchestown Festival in April. They both enjoyed stellar careers, becoming household names by riding winners on the biggest stages in Ireland and Britain, as well as Australia, France and Germany. They each graced the winners’ enclosure at the Cheltenham Festival on multiple occasions, they won an Irish Grand National apiece and countless other races on the Flat, in bumpers, over hurdles and over fences.

Alpha Centauri, owned by the Niarchos Family, was the outstanding star of the summer Flat season and was the deserving winner of the Horse of the Year Award. She was a four-time Group 1 winner, bouncing back to winning form with a taking victory in the Tattersalls Irish 1,000 Guineas in May. A famous Royal Ascot win was secured the following month in the Coronation Stakes and she went on to land the Falmouth Stakes at Newmarket in July and the Prix du Haras de Fresnay-le-Buffard Jacques le Marois at Deauville in August.

Dr Adrian McGoldrick, who retires this year as chief medical officer of the Irish Horseracing Regulatory Board, was presented with the Contribution to the Industry Award. The Newbridge-based GP has held the position since 2007 and was universally acclaimed for his efforts in improving jockeys’ safety and has been hailed for his research into areas including athletes’ dehydration, concussion, nutrition and mental health. Dr McGoldrick served as racecourse doctor at the Curragh for over 30 years. 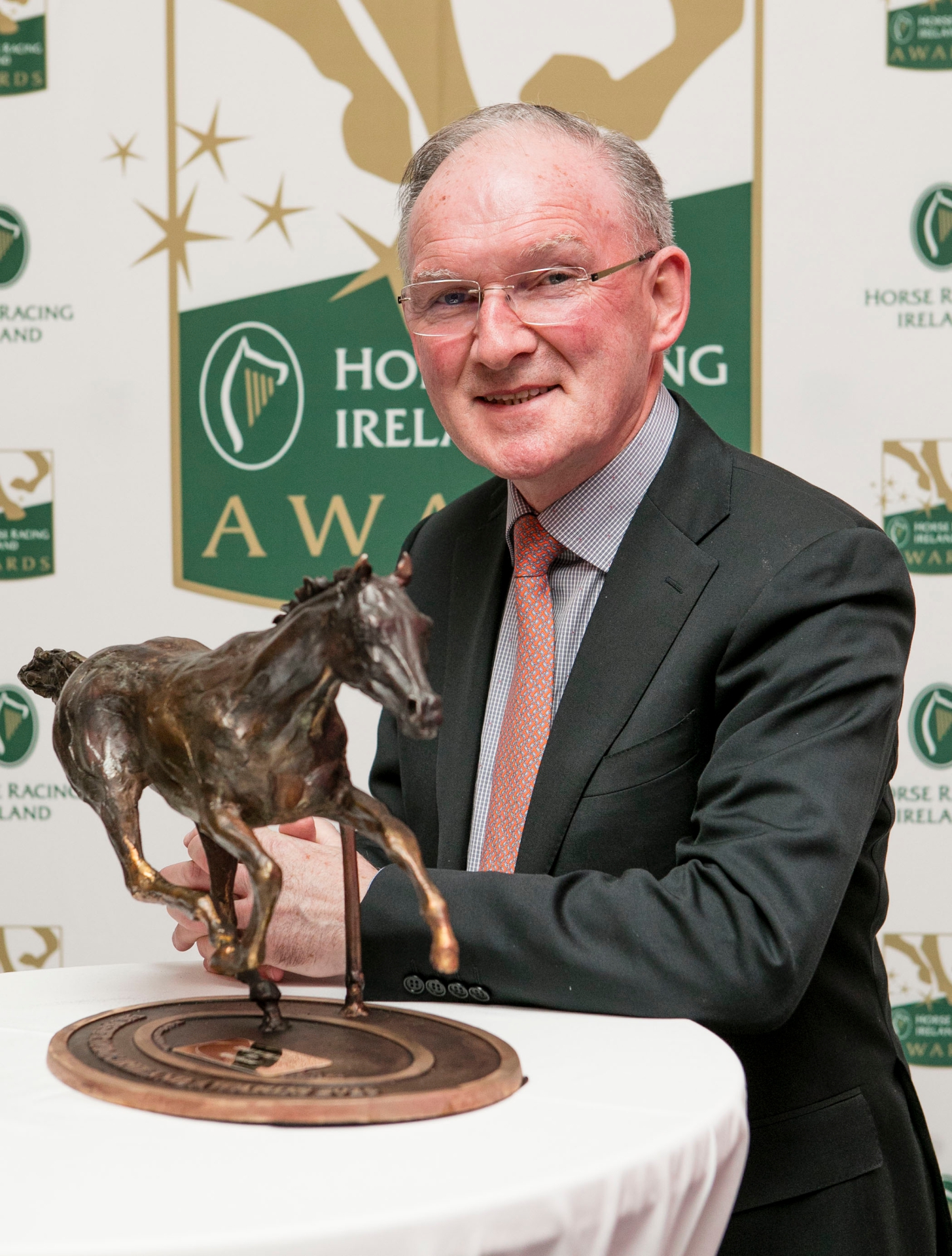 The National Hunt Award goes to Willie Mullins who enjoyed another remarkable year, maintaining his grip on the Irish National Hunt Trainers’ Championship with a record total of 212 winners. He saddled (another record) 18 winners at the Punchestown Festival alone, including a remarkable six out of seven on the Wednesday. He became the winning-most trainer in the history of the Cheltenham Festival with 61 winners, seven of which came last March, and achieved a personal milestone of 3,000 career winners when Timi Roli won at Wexford in June.

Donnacha O'Brien is the winner of the Flat Award. In a sensational year, Donnacha was crowned champion jockey for the first time with a total of 111 winners and won his first Classics in 2018 in both Ireland and England when taking the English 2,000 Guineas on Saxon Warrior and the Dubai Duty Free Irish Derby on Latrobe, trained by his brother Joseph. He also landed the Epsom Oaks on Forever Together and further Group 1 successes with two-year-olds Ten Sovereigns, Fairyland and Magna Grecia.

Rachael Blackmore is the winner of the National Hunt Achievement Award. She regained her lead at the head of the jockeys’ championship at last weekend’s Fairyhouse Winter Festival, maintaining her sensational winning form. Her success on Patricks Park at the Dublin Racing Festival and three winners at the Punchestown Festival kept her name in lights, as did her unprecedented treble at Tipperary in July becoming the first female rider to complete such a feat. In more recent times, Bedrock has been a Grade 2 and a Grade 3 winner for her.

The Flat Achievement Award went to Curragh trainer Patrick Prendergast. He enjoyed a memorable season with Skitter Scatter, which rose through the ranks to land the Group 1 Moyglare Stud Stakes at the Curragh on Longines Irish Champions Weekend. This Dundalk maiden winner went on to land the Group 3 Silver Flash Stakes at Leopardstown and Group 2 Debutante Stakes at the Curragh before her high-profile end of season success. Cedars Of Lebanon was a three-time winner for Patrick during the year and enjoyed a notable success when taking the Foran Equine Irish EBF Auction Race Final at Naas in October. 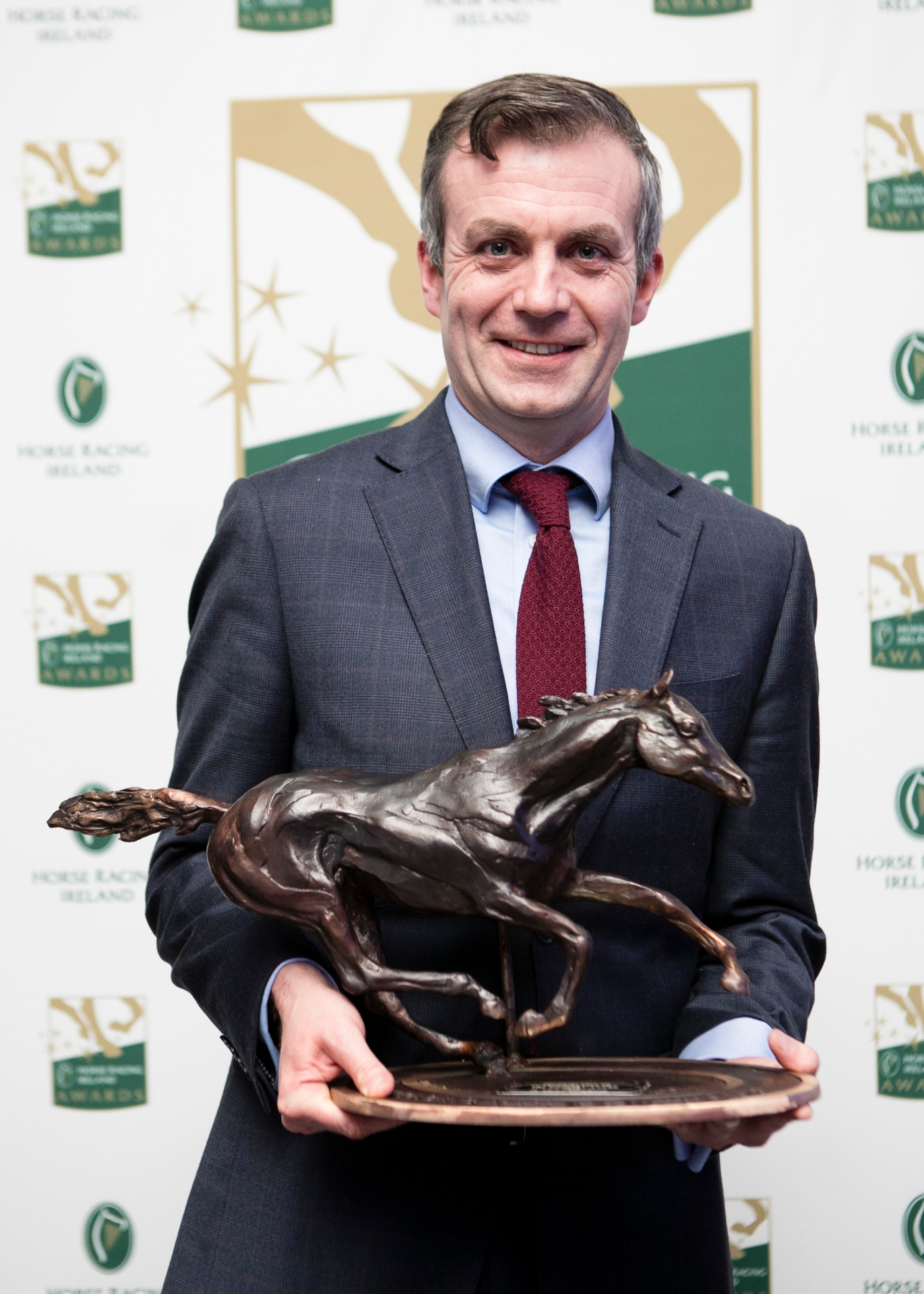 The Point-to-Point Award goes to County Wexford for the third year running as Barry O’Neill adds to his 2017 success.  The 2017/18 season saw Barry defend the national riders’ title thanks to a total of 59 winners on 53 different horses with an impressive strike rate of 22%. Barry rode four trebles at Oldcastle, Monksgrange, Loughrea and Borris House which helped him not only retain his eastern rider’s title but also claim a first title in the northern region. On the track, O’Neill teamed up with point-to-point recruit Commander Of Fleet to win the Goffs Land Rover Bumper at the Punchestown Festival.

Derek O’Connor is the winner of the inaugural Ride of the Year Award which was determined by a public vote. Derek’s winning ride came in Ireland’s premier steeplechase, the Unibet Irish Gold Cup at Leopardstown, on the second day of the Dublin Racing Festival which he won on Edwulf. Derek brought the unconsidered 33/1 chance from well off the pace, timing his run to absolute perfection to get up the line to pip Outlander.

Horse Racing Ireland Chairman, Nicky Hartery, commented: “We have people and horses in Ireland who have achieved some truly brilliant things in 2018 and it is fitting that we honour them tonight. I would like to congratulate all our winners and nominees and wish everyone in the Irish racing industry continued success as we head towards the New Year.”

Brian Kavanagh, Chief Executive of HRI, said: “Our people and horses did us proud once again in 2018 and my congratulations go to everyone who has contributed to another memorable year for Irish racing. We can look back on the careers of our ‘heroes’ Katie Walsh and Nina Carberry with great fondness and what an impressive legacy they leave behind, as does Dr Adrian McGoldrick, a very deserving winner of the Contribution to the Industry Award. Alpha Centauri is a fine winner of the Horse of the Year Award. Our congratulations to her connections, including Maria Niarchos-Gouazé and Electra Niarchos, who we were delighted to have with us tonight.”