Looking ahead to Sunday's Auction Series Final at Naas 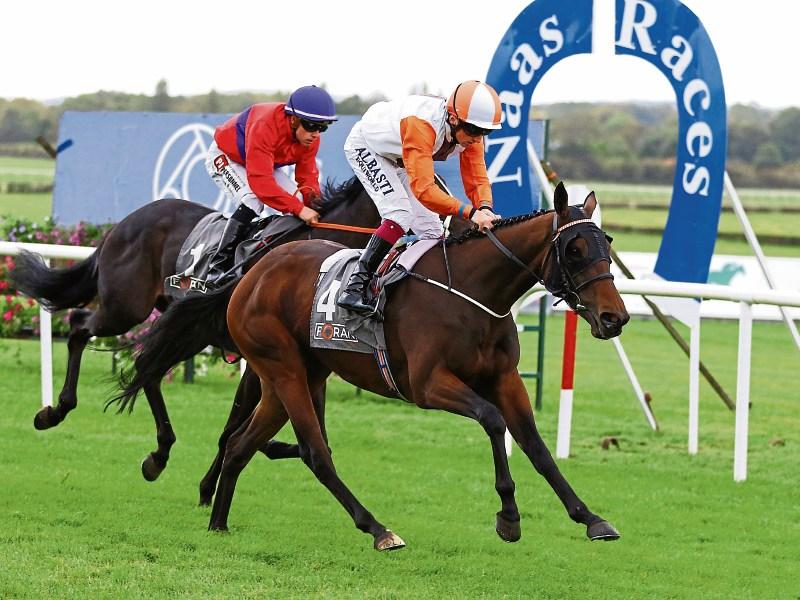 Trainer Ger Lyons has four runners with Kestrel Prince being the horse with the highest official rating (89) but his Army Recruit was runner-up to the smart Circus Maximus at Gowran Park last time and that form was well boosted by the subsequent third-placing of Circus Maximus in a Group 3 event at Newmarket.

Michael O’Callaghan has two remaining with the once-raced Dark Pursuit likely to be the pick of the duo having defeated Army Recruit in good style at Down Royal on his only start. Trainer Joseph Murphy has really hit form, his Gustavus Weston was an impressive winner of his latest start at Fairyhouse last month.

Top National Hunt trainer Gordon Elliott also has two to choose from with his Galway Festival winner Highway To Success likely to go well but his other representative Aristocratic Man chased home the subsequent Beresford Stakes winner Japan on his most recent start at Listowel. Last year’s winning stable, Dermot Weld, is likely to be represented by Munees Gemini, runner up to the well-regarded Goddess on her first start at Leopardstown in July.

Shane Lyons, Assistant Trainer to Ger Lyons, said: “We are delighted to support the series and final, it’s a great initiative by the Irish EBF and Foran Equine. We have Kestrel Prince in the final, who has been a great horse this year, he won well in Roscommon twice and he is in great form. The last couple of years this series has been a massive plus, €120,000 final and the qualifiers are nice pots, we love supporting it.”

Commenting during the week, Jessica Harrington, said: “Dragon Roll is our main contender, she won a Foran EBF Maiden at Gowran Park, she just got up on the line, there was a little bit of an ease in the ground that day, I would be hoping that we could have an ease in the ground on Sunday. It's a great series, I am really for it, I think its brilliant, it does give people with a smaller budget the chance to win a race and go for the big pot in the final.”

Noel Meade, trainer of Dadoozdart, said: “We've been very happy with Dadoozdart since his last run at the Curragh, that was over 6f, I think 7f will suit him a lot better. He seems in good form since, I wouldn't mind a little bit of rain between now and then, but if we get that I think he has a big chance. The final has been on our mind for quite some time, he grew a bit during the summer and I didn't want to over race him but I had to bring him to Roscommon to run him to qualify for the final, I think he’s quite a nice horse.”

Gareth Connolly, Sales and Marketing Director, Foran Equine, commented: “The Foran Equine Irish EBF Auction Series continues to be an enormous success. It is designed to create opportunity within the industry and to hear the positive feedback from the owners, trainers, jockeys and breeders who are benefiting from the sponsorship is significant. This feedback confirms to us, that this is the right investment back into the industry that supports our business. With the level of prize-money on offer on Sunday, it’s no surprise to see the final so well supported and we’re looking forward to an intriguing contest at Naas. I would like to thank everyone who has supported the series and the Irish European Breeders Fund for working so closely with our team to continuously develop this partnership.”

Nessa Joyce, Manager Irish EBF, said: “Sunday’s €120,000 final marks the fourth year of the auction series, and the second year of a successful partnership with Foran Equine. The series is firmly established in the juvenile racing programme and we are already looking forward to it growing even further in the future. The average price of runners in the series to date is €20,000 and two of this year’s winners were bought for less than €5,000, Dragon Roll (€5,000) and Lady Marengo (€3,000) who are both contenders for the final on Sunday. The series continually tells the story that you can get involved and win races with a modest investment.”