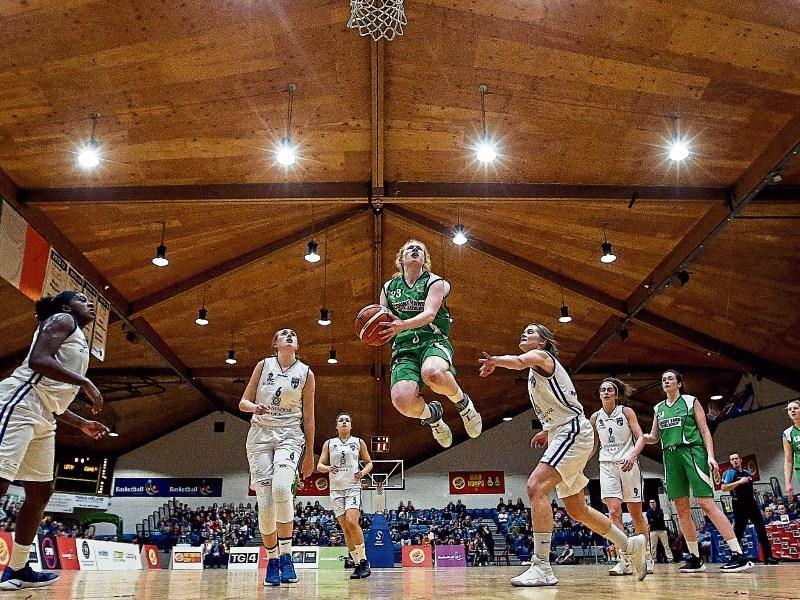 League holders Courtyard Liffey Celtics opened up their season with a bang, with a comprehensive 78-48 point win over Maxol WIT Wildcats in Kildare on Saturday evening.

Stand-out performances from Briana Green and Aine O’Connor – who scored 45 points between them – helped the hosts into a 41-22 point lead at half time and they didn’t look back from there, while a Bronagh Power-Cassidy inspired DCU Mercy had the better of IT Carlow Basketball at the university on Sunday afternoon, as they ran out 69-30 point winners.

It was a clean sweep for the three Women's Super League teams from Cork this weekend in the opening round of the season, with all three sides bagging big wins across the weekend.

Singleton SuperValu Brunell made a firm statement in the Women’s Super League on Saturday evening as they overcame Pyrobel Killester at the IWA in Clontarf, 61-65. A strong team performance from the Cork outfit saw a good spread of scores, with Linda Rubene, Danielle O’Leary and Madelyn Ganser all standing out for the visitors.

Speaking afterwards, head coach Tim O’Halloran said: “Today’s game was very tough, we knew it was going to be tough coming up here in the opening game of the season. They threw everything at us and had some big shots at crucial times, but everyone stepped up to hold on to the win and I’m delighted with to get it.”

Fr Mathews announced their arrival in the Women’s Super League on Saturday evening with an emphatic 68-29 point victory over NUIG Mystics, with the dynamic duo of Grainne and Niamh Dwyer top scoring for their side with 14 points apiece. Big defence from the home side saw them keep Mystics to just eight points for the closing two quarters.

“I’m very happy with the result,” said head coach, James Fleming, “but most importantly, our defence in the second half was excellent. It was great to see so many of our young players get some valuable court time and we’ll start again now on Monday and prepare for a daunting trip to our friends from Kilkenny next weekend.”

Annaliese Murphy meanwhile top-scored her Ambassador UCC Glanmire team to victory on Sunday afternoon, bagging 29 points for her side as they saw off the challenge of newcomers Marble City Hawks 88-76 at the Mardyke Arena UCC. Speaking afterwards, coach Mark Scannell reflected: “It makes it easy when you have players like Annaliese in the team. This was a great win for us. We have a big game in Galway next weekend and back down to play Fr Mathews after that so we'll have a better idea of where we stand then.”

It was another big weekend of action in the Men’s Super League as well, with reigning champions UCD Marian keeping their winning start to the season intact on Saturday evening with a ten-point win over Pyrobel Killester in Clontarf. A huge second half display from Barry Drumm and Neil Baynes saw the holders edge in front midway through the third and despite some good shooting from Killester, UCD held on to win out 63-73 in the end.

Speaking afterwards, head coach, Ioannis Liapakis stated: “It’s never easy to get a win over here [Clontarf]. The past six years, that’s only my second time to win here. I think in the game, and in all of our games, the only target is our defence. We try to win through defence and that was the key tonight. We learned our lesson from last year too, as both of the games we lost to Killester last year we lost them in the third quarter, but I think we did a great job in the third today and I’m really thrilled about it”.

Down in Cork meanwhile, despite the best efforts of UCC Demons it was Garvey’s Tralee Warriors who came up trumps in their Men's Super League clash at the Mardyke Arena.

A big performance from Warriors’ Darragh O’Hanlon in particular, who contributed with six three-pointers and a total of twenty points against his former club, helped the visitors hold off Demons in what turned out to be a tough match up in Cork. Another superb display from Kyle Hosford and Carlton Cuff for Demons just wasn’t enough on the night, as Pat Price’s side emerged victorious on a final scoreline of 75-84.

“It was important for us to bounce back after last week,” admitted Coach Price afterwards. “We know we’re not the finished product, but we want to make sure we’re going in the right direction and are making incremental improvements in what we learned from the Killorglin game last week. Today was a big win in a tough environment and Demons are a good side - Kyle and Carlton have had back-to-back terrific games.”

Up in Belfast meanwhile, Belfast Star got their first win on the board with an 85-77 point victory over Griffith College Swords Thunder on Saturday evening. Mike Davis and Mark Berlic were the stand out players for Star, getting some big scores on the board to lead 44-34 at the break. Another good game from Swords’ Elijah Mays and Kevin Lacey saw them fighting back hard down the stretch, with the game drawing level twice in the third, but Star regrouped well to see out the win.