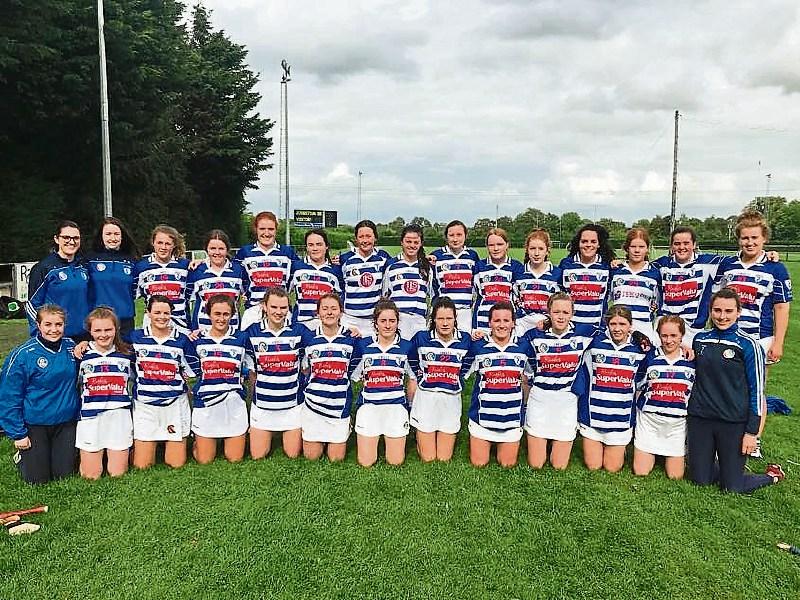 Naas proved that it is goals that win games as they hit four past Johnstownbridge captain and shot stopper Tanya Johnston in a bid to claim their first Senior Camogie Championship title since 1959, over the pride of Kildare Camogie, Johnstownbridge.

It was Aine Conway and Siobhan Hurley that locked early horns with both exchanging a brace of scores to keep both sides deadlocked right through to the tenth minute before Hannah Goodfellow blasted past Johnston to raise the first green flag of the afternoon and put day light between the sides.

Refusing to rest on their laurels Naas soon had a second four minutes later when Tara Bedford netted the second of the day and left Johnstownbridge reeling from what was unfolding in front of them.

A third Hurley point looked to steady a ship that had appeared to sprung an early leak and with points from Emma Farrell and Roisin O’Connell it looked like Johnstownbridge were beginning to find their feet.

Determined not to allow this Naas again burst forward with pace and purpose and an Aine Conway free kept the Naas account ticking over before Sarah Cullen sent Johnston’s day from bad to worse with a third Naas goal before the break.

A late O’Connell point did little to change the complexion of the tie as Naas held a commanding six point advantage.

As the sides re-emerged for the second period Johnstownbridge were determined to fight back and prove their title as kingpins of Kildare Camogie.

An early exchange between Conway and Clodagh Flanagan looked to start this and further points from Hurley (3), Louise Codd and O’Connell left the minimum between the sides as the tie entered its final ten minutes of action.

Watching the Johnstown bridge resurgence and determined not to relinquish the lead they held from the early stages of the opening half Naas again looked to their ever accurate free taker Conway to edge them ever so slightly clear as the time ticked down once more.

A brace of frees ensure a goal would separate the sides with six minutes of action left on the clock.

Two late points from Hurley and Megan Cooney ensured that Naas would have a nervous wait on the full time whistle as Johnstownbridge dug deep and forced Naas all the way to the end but a goal in the stroke of full time from Sarah Cullen ensured that Naas would celebrate in fine style as they secured their first Senior Camogie Championship title over the title laden Johnstown bridge.