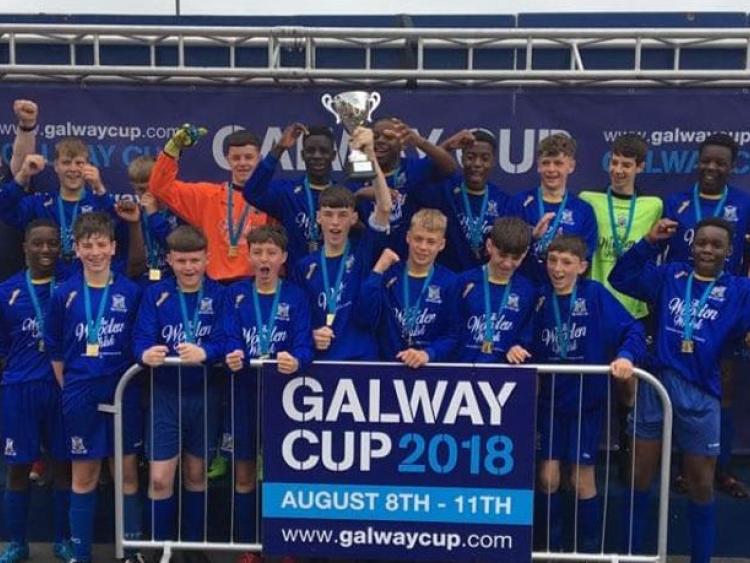 Last week lads of Newbridge Town U15s won the Galway Cup Plate, which is one of the top schoolboy tournaments in Europe and this featured Leeds Utd, Shrewsbury Town, Chicago Fire and Colrado Rapids from USA's MLS and stellar teams from Ireland such as KDUL Academy, St Francis, Leixlip and many other academt and top club teams.
Newbridge Town, under the stewardship of Desy Balmer and Mark Hughes, took the lads to Galway and not only did they beat but outplayed hosts Salthill Devon, Clare's Champsions Tulla United and despite a draw with St Frrancis of DDSL Prem but a defeat to North East Counties team left the boys in blue with a final against South Donegal league.
Wonderful team performances and some outstanding efforts by Cian Grimes, Isak Jamirah, Joe Mills and Sean Donohoe backed up by solid shows from Adam Balmer, Mikey O'Connell, Keiran Olateju and Daryl Ntumba.
“I'm delighted for the boys. They deserve this feeling. They work hard and are very committed” said Manager Desy Balmer, adding that: “this has been the best tournament I've ever experienced and I can see why the likes of KDUL, Leeds United etc come here every year.”
Newbridge Town won the U15 plate whilst Leixlip United won the 2006 Cup and the KDUL coming fourth in the 2005 cup you can rest assured that the quality and standard of football in Kildare is on par with the rest of the country.
Team management would like to thank Mick Curran at Parkwest Fire Protection; Derek Whelan; Gabby Matai at Wooden Whisk; Dermot O'Hara at O'Hara Cabling and Construction; and April Balmer at Little Kickers for their sponsorship.
Next adventure is to Barcelona in October as the U15s and the U12s participate in the Football Cup De Barca.