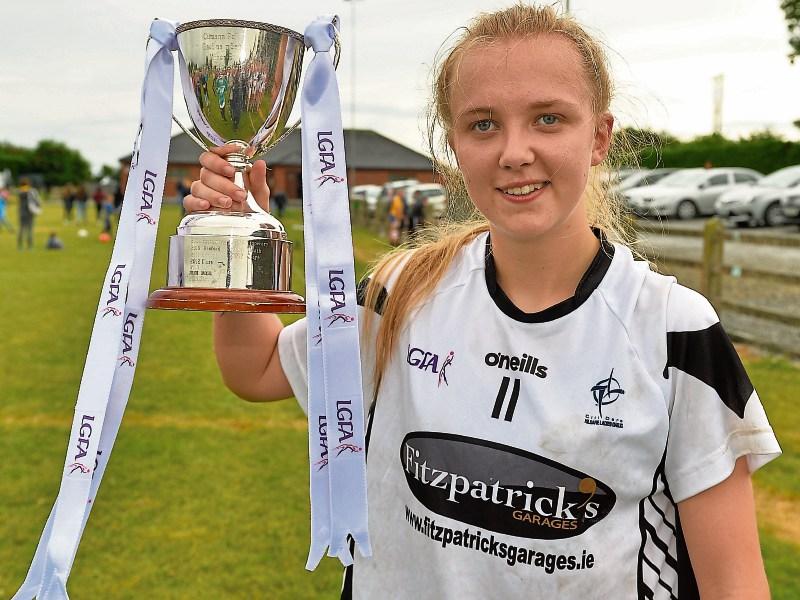 Yet another memorable chapter was added to the good news story that is underage ladies football in Kildare this summer when Gavan Doyle’s minor panel produced a performance and vim, vigour and no little skill to comfortably overcome Roscommon in Sunday’s All Ireland minor 'B' final, played in damp conditions at Hogan Park in Moate.

Both these sides came through remarkable All-Ireland semi-final battles, Kildare edging out a hugely talented Waterford side by a single point in Nenagh, while Roscommon’s win over Antrim was even more memorable. The Connacht county went 13 points in front after the first quarter of that game in Monaghan only to fall two behind by the closing stages and then score a late 1-1 to secure a 5-6 to 1-16 win.

On Sunday, they never looked like plundering anything like that sort of total as Kildare completely controlled the game, dictating the terms of engagement and enjoying almost total dominance in the battle for possession.

The different identities of the two teams was clear to see. Roscommon wanted to get early, long deliveries into their full forward line and leave it to that trio to do the damage, while Kildare eschewed the long ball option and instead exploited their strength in the middle third, carrying the ball forward to great effect and creating scores through good support play and tight close control.

Yet any notion that this young team of Lily Whites were nothing more than athletes was dispelled when they got close to goal, as four out of their six starting forwards pitched in with three scores each, while it took some real heroics from Sasha Lavin in the Roscommon goal to prevent that margin from stretching out even further.

Ten scoreless minutes at the start of the tie, with both sides creating half chances that weren’t taken, suggested that a tense encounter was in store. Kildare’s full back line struggled to handle the movement and interplay of Roscommon’s inside forwards, though the supply of ball was intermittent at best, while they also shut out any clean looks at goal from good positions, instead forcing their opponents to shoot from tricky angles.

Yet on a greasy afternoon a slip was always a possibility and when that happened in the 11 th minute, Roscommon took full advantage.

Sinéad Glennon seized possession behind a group of players who contested a long ball out of defence, committed the full back to the tackle and then and fed Aoife Gavin, who fired to the net for the opening score.

Kildare’s response was exemplary however, and if anything, they benefited from the concession of that goal as it appeared to rid them of their nervousness.

Captain Neasa Dooley led by example with a great run and point, also adding a free, and then with 19 minutes on the clock she gave Kildare a lead they’d never relinquish when she ran through on goal, rounded the keeper and placed the ball into an empty net from a tricky angle.

Roscommon continue to threaten on the break, with corner forward Aimee O’Connor leading the charge, but the introduction of Ciara Downey tightened up the Kildare defence, while other starting backs came into their own.

Lara Gilbert started to get out in front and sweep up a lot of early balls, while Lauren Murtagh also started to show the form that eventually saw her pick up the Player of the Match award.

Soon 1-3 to 1-1 became 1-7 to 1-2 with half time approaching. Nanci Murphy hit two superb points on the spin to open up that moderate gap, but Roscommon made a number of goal-line blocks, Lara Curran hit the crossbar and Sarah Doyle was denied by a superb Sasha Lavin save, suggesting that the westerners were getting away comparatively unharmed during Kildare’s period of ascendancy.

That all changed when a speculative high ball from the right wing was contested by Lavin and Leah Hayes, and as the two girls clashed in the air, the ball broke off the Round Towers player and trickled over the line for a second Kildare goal. That lead was pushed out further when Sarah Doyle made it 2-8 to 1-2 with the first score of the second half, but some good Roscommon defending prevented that lead from creeping into double figures, and a couple of points from O’Connor hinted at the possibility of a comeback.

Kildare cancelled those scores out with points from Hazel McLoughlin and Molly Aspell, but Roscommon’s window of opportunity was well and truly opened when a wonderful blockdown from Mikaela McHugh resulted in the same player beating Ciara Farrell for a second Roscommon goal midway through the second half

Again, Kildare’s response was ideal. They drove at the Roscommon defence, drawing a yellow card for a rugby-style tackle from wing forward Ellen Irwin, and with the cushion of an extra player, they were able to easily see out the closing stages thanks to late points from Aislinn Dooley (2) and Sarah Doyle.