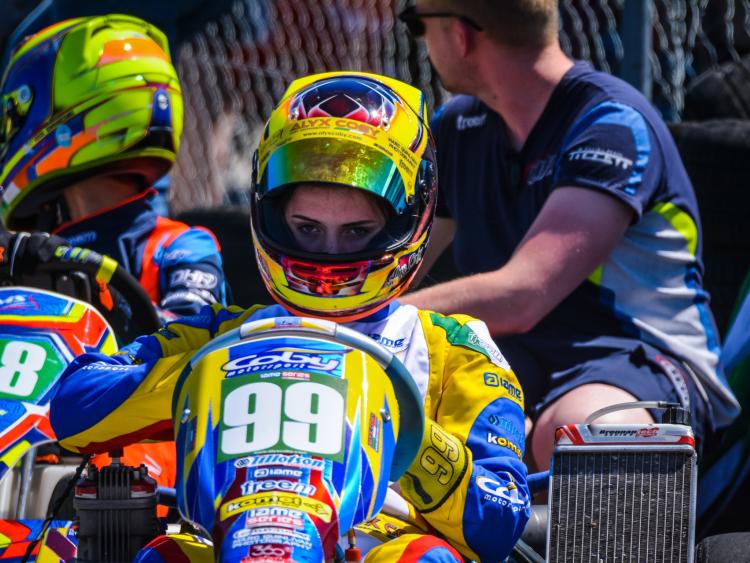 14-year-old Alyx Coby, from Newbridge was on track last weekend as the Motorsport Ireland Karting Championship made its way west to Tynagh in Co. Galway for the fourth round of the season.

After an eight week break the drivers were all keen to get to racing again and, following a short test session on Saturday, racing kicked off on Sunday morning with two qualifying heats followed by two finals.

SEE ALSO: From 1798 to Christy Moore, Downings House has had a great history

Racing in the IAME X30 Junior class, for drivers aged 11-16, Alyx started the first heat in 10th position. After picking up four places in the first corner she was up to third by the beginning of lap 3 and was the fastest kart on track over the remaining laps as she set about catching the lead karts, setting the fastest lap of the race on the penultimate lap and taking the chequered flag in second place.

For the second heat Alyx lined up in third place and moved up to second after narrowly avoiding a collision in the first corner. The top three drivers ran nose to tail for the next six laps before Alyx took the lead at the last corner and then defended her position over the final two laps to take the victory.

Following the heats, the Newbridge schoolgirl qualified in second position for the first of the day’s finals. After dropping two places at the start she got back up to third by the end of the first lap. Over the next eight laps the top three positions changed from lap to lap. Alyx entered the final corner in third place, but with a better run out of the corner she managed to cross the finish line in second place with the top four drivers separated by less than two tenths of a second.

Starting the second final in second place, Alyx briefly dropped to third at the start before regaining the position two laps later with an overtake on the way into the first hairpin. At the same corner on the next lap the third placed driver collided with her causing them both to lose time, but she managed to regain control of the kart and keep the position while the other driver lost six places. The time lost to the leader in this incident was too much to claw back over the remaining laps and Alyx finished in second place to secure her third podium finish of the season.

That result sees Alyx retains her third place position in the Championship and halve the gap to second place to just 7 points as the series returns to Mondello Park in Co. Kildare for round 5 on July 8.