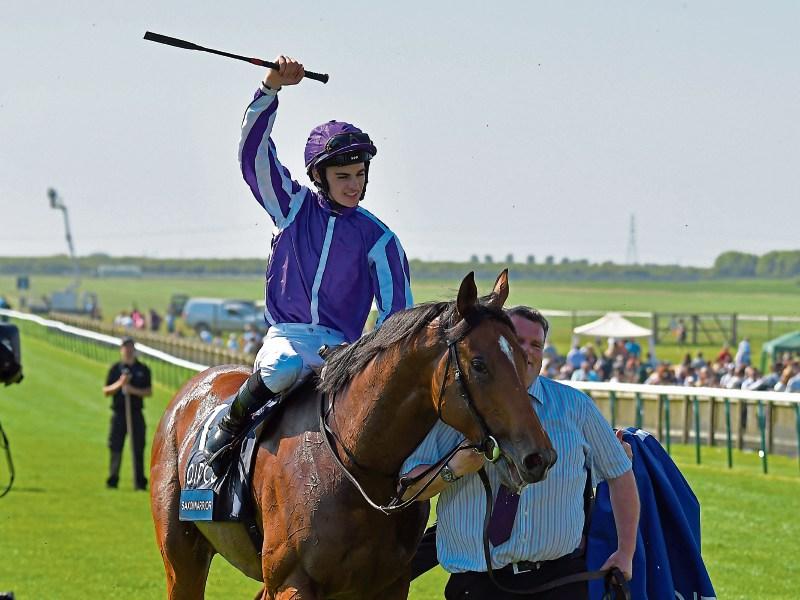 Saxon Warrior and Donnacha O'Brien after winning the Qipco 2000 Guineas at Newmarket on May 5. Picture: Martin Lynch

The statistics will say Camelot completed the Triple Crown in 2012.

He’d come late to win the 2,000 Guineas before stylishly triumphing around the tight turns of the downs in the Epsom Derby. Then he went to Doncaster in a bid to emulate the great Nijinsky but on that day, he came up short when finishing second to Encke. Subsequently, the Godolphin-owned winner was disqualified after a prohibited substance was found in his system. So did Camelot win the Triple Crown in 2012? The roll of honour says so, but it doesn’t feel like it. As he didn’t do it on the racetrack, it just doesn’t feel the same. So, the way I see it, the 48 years wait for a Triple Crown winner on British soil continues.

Last Saturday however, the first major step to a horse completing the most famous treble in European Flat racing occurred when Saxon Warrior sauntered to success in the QIPCO 2,000 Guineas. A ‘Derby horse’ he was referred to in the days leading up the one mile Classic by his trainer, the son of Deep Impact achieved what both Camelot and Australia did in the same race by challenging late and winning with more in hand than some may have thought.

So what next for the latest of the Ballydoyle superstars? There are two options. He’ll either take the ‘Nijinsky route’ or the ‘Sea The Stars route’. Both will no doubt mean taking in illustrious races throughout the summer and autumn. Next stop will be the Epsom Derby, there’s no doubt about that. Of the Guineas winners which have headed to Flat racing’s most famous Classic, a good deal have managed to achieve the double. Certainly from the Ballydoyle quarters anyway.

While bred differently, he’s got a very similar profile to a lot of the Coolmore-owned Derby winners too and his sire Deep Impact is most definitely more stamina prone than speed. The Japanese superstar will be remembered by most for finishing second in the 2006 Prix de l’Arc de Triomphe won by Rail Link but from his 12 career victories, six of them were over a minimum trip of 1m4f. And he even managed to win a Group 1 race over two miles in his native country.

So when you take all of that on board, it’s hard to see how he won’t be better over the Derby trip and indeed, the 1m6f of Doncaster’s St Leger. Should connections opt to skip the St Leger after next month’s Epsom Derby, then some of Europe’s top middle distances races will no doubt await the unbeaten three-year-old. The Coral Eclipse would be the next option for him, a race won by two Derby winners in Nashwan and Sea The Stars, while given the importance that the Irish Derby has been on the Ballydoyle radar, that would no doubt be in the mix.

These days, the Juddmonte International is high on the priority list for the top-class middle distancers while it’s safe to say that the Irish Champion Stakes is now the most prestigious race on the European Flat race programme. Then we come to the Prix de l’Arc de Triomphe, arguably Flat racing’s most cherished race if you ask me. Aidan O’Brien has thrown many of his top colts at the Longchamp showpiece in the past but it’s just been Dylan Thomas which has managed to win the race for him — and he needed to survive a lengthy stewards’ enquiry then. It’s a long way until next October but if all goes swimmingly between now and then, Saxon Warrior will surely turn up in a bid to go one place better than his sire achieved 12 years earlier. What a spectacle it would be too if he was to put his unbeaten record on the line against Enable and Cracksman. Could you imagine if that trio turned up in France on the first Sunday of October? Whatever approach Aidan O’Brien takes with Saxon Warrior, he himself is sure to have another hugely successful season. Paddy Power offer 5/2 that Saxon Warrior completes the Triple Crown while the same firm offer 8/1 that the Ballydoyle maestro breaks his own Group 1 world record, which he set last year. In my lifetime, I’ve yet to see two things. A proper Triple Crown winner and Aidan O’Brien to have a British Classic clean sweep. The latter can’t happen this year but the first is very much on the cards.

Saxon Warrior, it’s all down to you.