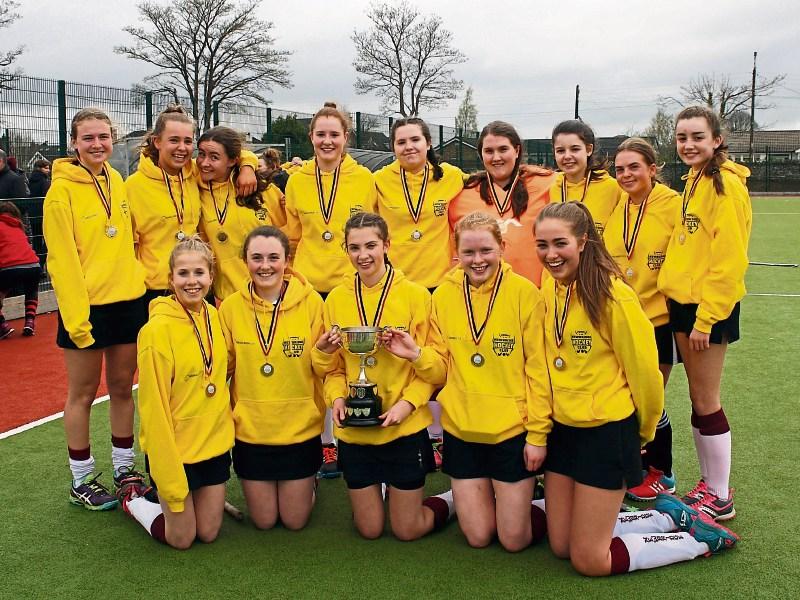 Kitted out in their Manguard Plus sponsored gear, Newbridge saw their early nerves dissipat as the game got under way with Newbridge quickly sussing out the opposition as the back line of Mary Enright, Ella Kelly, Mia Walsh and Rebecca Glynn holding strong with Catherine Maguire solid in goals

The girls worked hard to get around Abbeyleix players and with clever diagonal passing were able to release the ball to forwards Abby Phelan, captain Ailbha MacTigue and Anna Young.

Within the first 15 minutes a well-executed short corner enabled Ellie Henry to hit the back board and taking the lead.

Newbridge continued to control the game and with the introduction of Kate O’Donovan into midfield in-
creased pressure was put on the Abbeyleix defence. With this addition and a combination of passes from Mary Enright up the left wing to a waiting Aibhla MacTigue, who quickly sent the ball across to the cleverly positioned Abby Phelan who drove to the net.

Some tired legs from Newbridge saw Abbeyleix come back into the game however with Ella Kelly controlling the right back position danger was soon averted.

The girls in turn released the ball through to midfielder Aisling Elliot up to Kerrie O’Donohue and Keeley up front.

The third goal came again from the back line to midfield who worked tirelessly up and down the pitch with Ellie Henry scoring the third goal for Newbridge.

Second half saw Newbridge defence a bit busier however goalie Catherine Maguire pulled off a number of saves keeping the scoreline 3-0 up until the last minute of the game where Abbeyleix on a fast break manged to put one away.

A strong performance from everyone around the park with players of the match being awarded to Ellie Henry and Ella Kelly. A big shout out to coach Sandra Whelan who has worked hard with this group in this and the Leinster league; wishing a speedy recovery to Niamh Doherty.