Preview for this weekend's opening games 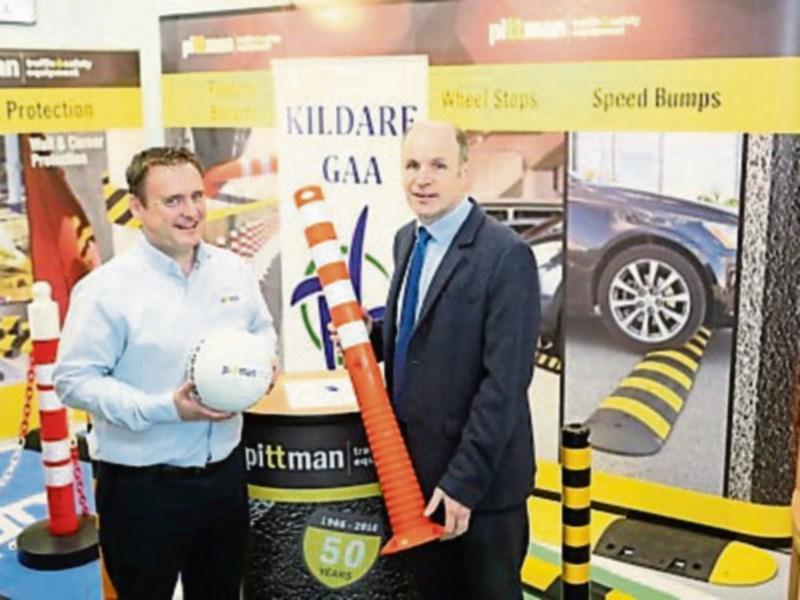 Brendan Pittman, Pittman Traffic and Safety, with Ger Donnelly, County Chairman at the announcement of the new sponsors

Always one of the hardest and toughest of championships to win and this year the intermediate championship is no different.

2018 will see a new sponsorship for the intermediate with the announcement last week of Pittman Traffic and Safety as main sponsor.

Pittman are the leading experts in traffic and safety equipment in Ireland and the UK, specialising in speed bumps, bollards, bike racks, line-marking as well as portable and fixed barrier systems.

Pittman are a Kildare based Company and are currently celebrating 10 years in Athy Business Campus.

And so the action; same format as senior championship with the opening eight games (open draw) solely a seeding exercise.

The first thing one looks at when previewing this championship is who did well last season, and even more importantly who were the beaten finalists.

It often takes a team to lose a final at this grade before they can go on and win it and with that in mind Kilcock must be one of the fancied to lift the Cup this time around.

Among the fancied teams one would expect to emerge to the business end of this year’s intermediate, along with Kilcock, would be St Kevin’s, Two Mile House, Clogherinkoe, Monasterevin and possibly Ballymore Eustace.

St Kevin’s, holding their own in Division 1 at present, will take on Division 4 side Ellistown and despite the boys from the south of the county going well to date it is hard to see anything but a win for Kevin’s.

Again teams from different divisions clash in this one with Clogherinkoe (Division 2) taking on Kill (Division 3).

While not setting the league alight at the minute Clogherinkoe will be strongly fancied to get the better of a Kill side presently struggling in Division 3.

Both playing in Division 2 of the league; both struggling and in fact propping up the table. Not a lot between them but would expect Rathangan to win this one but it could be close.

If Kilcock have real ambitions of being involved in the latter stages of this competition then in all fairness they must get over Ballyteague.

The Larks, playing in Division 3 are not shooting the lights out at present while Kilcock (Division2) have been somewhat disappointing to date but one would expect them (Kilcock) to advance.

Last year’s junior champions Ballymore will be hoping to have a decent run in this grade but they face a bit of a test against a Monasterevin who are always difficult to beat come the championship.

Tight game expected but The Blues get the nod.

Both play their league football in Division 3 and while it is doubtful if either will make any real impact, nevertheless Straffan just might be too strong in this one.

Sallins are going along well in Division 3 of the league while, one would expect The Croft to be making a bigger impact in the bottom division.

Sallins will be well organised by Mark Millham and if current league form is anything to go on the canalsiders should win.

The House could do with improving their league form in Division 3 but on the other hand Nurney are near the bottom of Division 3.

The House, providing they have a full contingent on board should have enough in the tank for this one.