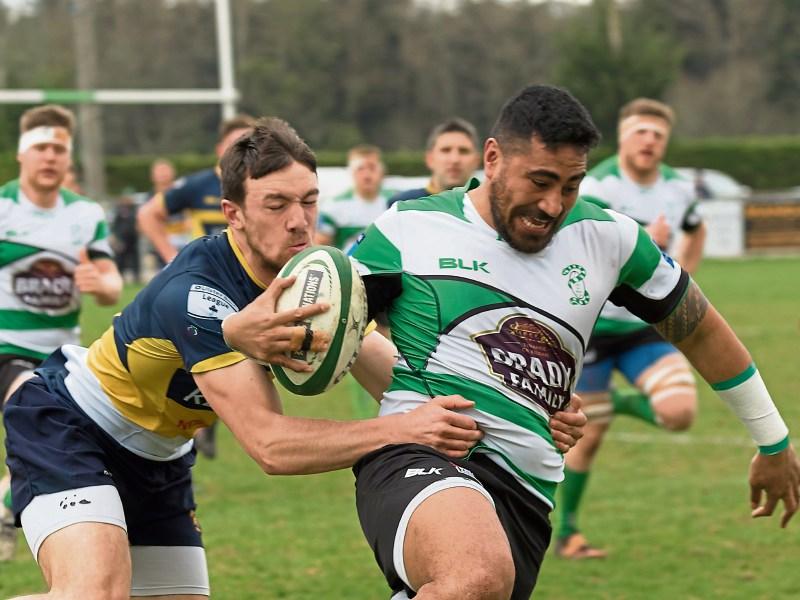 Naas Paulie Tolofua powers past Dolphin RFC Will Hanley during the recent Ulster Bank Division 1B tie at Forenaughts, Naas

The league phase of the Guinness PRO14 drew to a close last Saturday and despite getting hammered 47-10 by Connacht in the Galway Sportsgrounds Leinster topped Conference “B” to earn a home semi-final, and the eastern province will thus enjoy a valuable weekend off ahead of their Champions Cup Final against Racing 92 in Bilbao on Saturday week.

The RDS will be the venue for that semi-final when Leinster host the winner of next Saturday afternoon’s quarter final between Munster and Edinburgh, a game that will be played at Thomond Park.

The Guinness PRO14 final will be played a week later in the Aviva Stadium and the combatants in contention from the other side of the draw are Glasgow Warriors who will be at home in Scotstoun in a semi-final against the winners of next Saturday evening’s clash in Stradey Park between the Scarlets and tournament newcomers Toyota Cheetahs from South Africa.

With the domestic club season now drawing to a close it’s timely to look back at how the local clubs fared during a season that was surprisingly interrupted by two heavy snowfalls in March.

Naas continued to play at the highest level as they survived a late season slump in form before eventually securing their place in Division 1B of the Ulster Bank League (AIL) for another year after finishing in sixth place.

The club’s lower teams excelled with the 2nd XV winning the Hosie Cup at a packed Forenaughts at the end of December while they also won their league, Division 2 of the Metro League and will compete at the top end in a really competitive environment next season.

Not to be outdone the club’s 3rd string also claimed league honours as they edged past St Mary’s College to claim the Metro League Division 5 crown while the 4th team are through to the Michael Dunne Cup semi-final this coming weekend.

After a somewhat slow start MU Barnhall hit their stride in time to finish in third place in Division 2B of the AIL but they were unable to gain promotion as they went down away to Rainey Old Boys in the playoffs ten days ago.

The MU Barnhall U20’s enjoyed a successful campaign as they impressively won the JP Fanagan Premier 2 league by an eleven point margin and then ousted Premier 1 champions Lansdowne from the prestigious McCorry Cup before losing at the semi-final stage last Sunday to UCD.

North Kildare is the highest placed club in the Leinster League where they finished a credible fifth in Division 1B, and this league looks like being even tougher next season with the relegation of Monkstown and De La Salle Palmerston from Division 1A while Suttonians who won the promotion playoff remain as they were following Ashbourne’s failure to gain promotion to the AIL.

Ashbourne’s woes in the AIL Round Robin, where they finished third and thus were excluded from promotion, also affected Athy who had won their playoff but will now remain in Division 2B for another year after finishing second and where they will be joined by Edenderry who they beat in that playoff and who drop down from Division 2A.

Cill Dara and Newbridge will again ply their trade in Division 2A after finishing in the sanctity of mid table, the Kildare town club finishing in fourth position, one place higher than their neighbours from across the Curragh.

Clane will continue in Division 3 as their rebuilding mould continues and they will hope to improve on their fifth place finish this season.