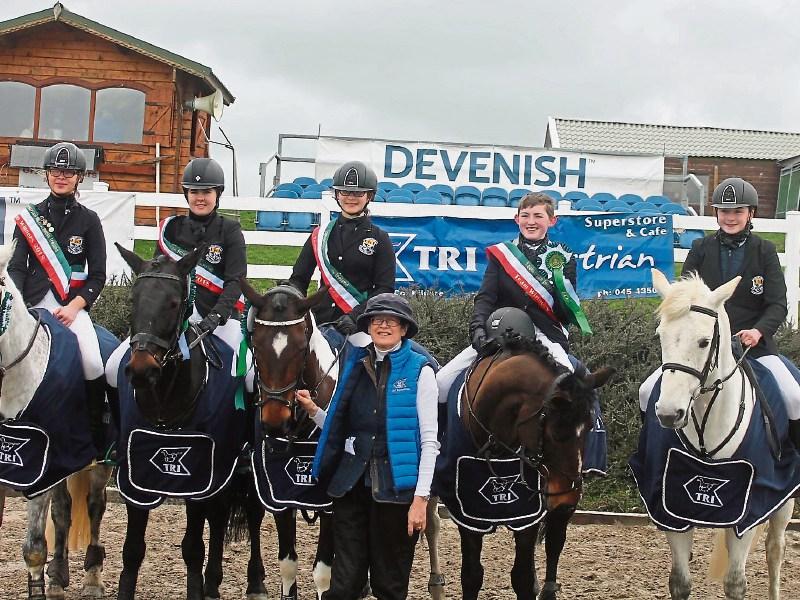 It was therefore very fitting that Newbridge College competed in Mullingar Equestrian Centre owned by the Fagan family on Sunday to claim the All Ireland Interschool’s League Title with riders Caragh Sweeney, Leah Heffernan, Niamh Flinter and Max Ross. Niamh Behan was the sub for the team. 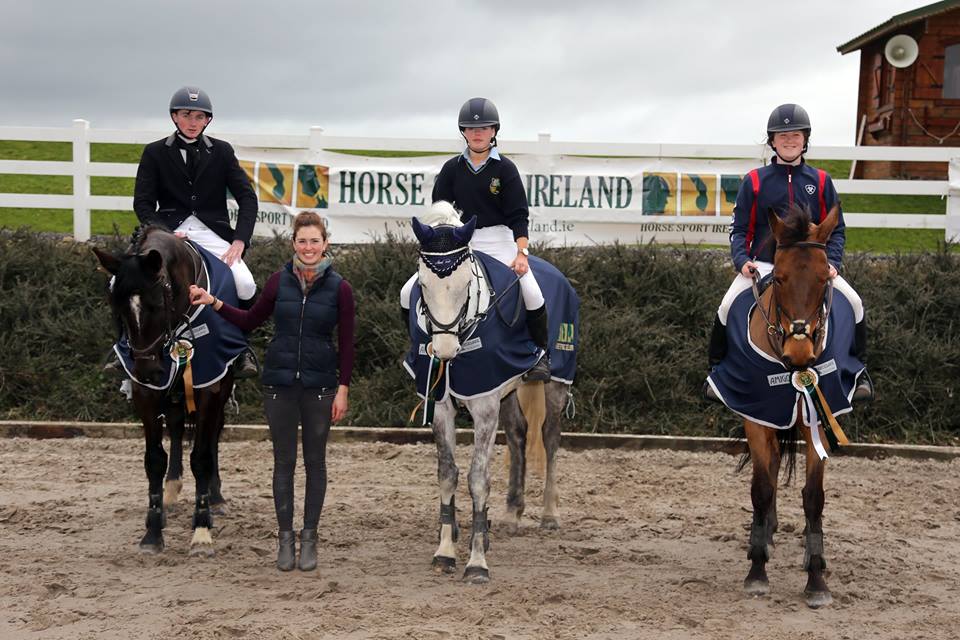 There is also a great family tradition within the Equestrian Club with Caragh’s sister Caoimhe part of the winning team in 2015 along with Niamh Behan’s sister Sarah, and Leah’s brother Luke with Leah’s older sister Lauren part of the 2013 winning team. Max Ross’s older brother Jack – a sixth year in Newbridge College –  won the Interschools Open Individual Title in 2015.

The Interschools Showjumping League begins each year in September with 25 competitions held throughout the winter and spring. Newbridge College had a very successful season recording 10 wins, three seconds, six thirds and two fourths and accumulating 157 points.

The team of Sophie, Emma and Rachel went on to win the Best Turned Out prize. 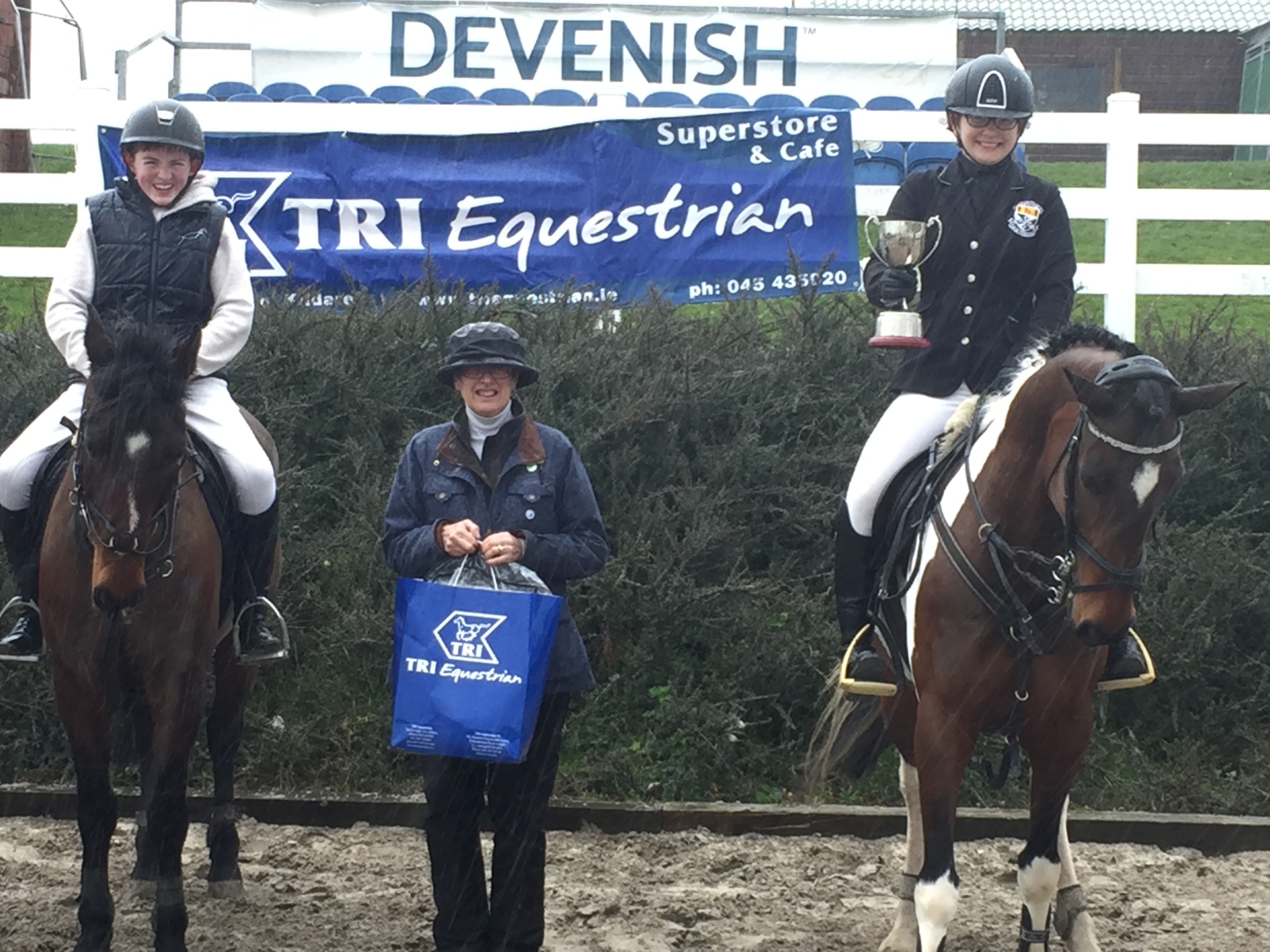 Four of the starting schools made it through to the jump off round, including the top contenders in the league and a visiting Northern Ireland school. Caragh Sweeney riding Kippure Steepleview Jack, Leah Heffernan on My Rockstown Two, Niamh Flinter riding Classie Lass and Max Ross on Ballydavid Sous all having clears earning themselves a place in the jump off.

Newbridge had an equally fantastic day in the Individual Competitions with the top four places going to Newbridge riders. Niamh Flinter who had been leading the competition all season took another win on the day to secure the League Title with Max Ross taking 2 nd place with Niamh Behan in 3 rd and Leah Ross 4 th . Finally Jack Ross in his last competition for the school took home the 1.10cms Horse Sport Ireland Class, Jack had qualified for this competition before Christmas but had also recorded 2 wins and one 2 nd place throughout the season.

Newbridge is also very fortunate to have up and coming riders who competed in the Novice Teams Competition with Aoife Keane, Alice O’Neill, Orla Ring and Kate Maloney. This team had very stiff competition and were very unlucky not to get into the jump off however, the school looks forward to them competing in the Open League next year.

Sophie O Neill, from first year won the 70cm individual class and is another rider with great potential for the future. This is a great achievement for Newbridge College and a super reward for all the hard work the riders and their parents put in every week. Julieanne Gaffney of JAG Equestrian coaches the Newbridge College Teams each week at her facility in Naas and regular visits to the all- weather cross country facilities at the

The Field Equestrian Centre really benefited the riders. The Equestrian club is organised and run by Chef d’equipes Yvonne Byrne and Chris Sweeney with Gail Carroll as training co-ordinator. With the great support the club gets from the Principal Mr Pat O’Brien and Vice Principal Mr Neville Conroy the club is delighted to be bringing back lots of silverware for the Equestrian Trophy Cabinets.

“The winning team on the day were very lucky to win a trip for three ponies to the Hurstpierpoint Interschools Championsip in Hickstead this summper sponsored by 5 Star Bloodstock Transport and we wish them the very best in the UK this summer. The next trip for Newbridge College is to Balmoral Show in May where they will represent the School in the Northern Ireland Interschools,” said the Club.