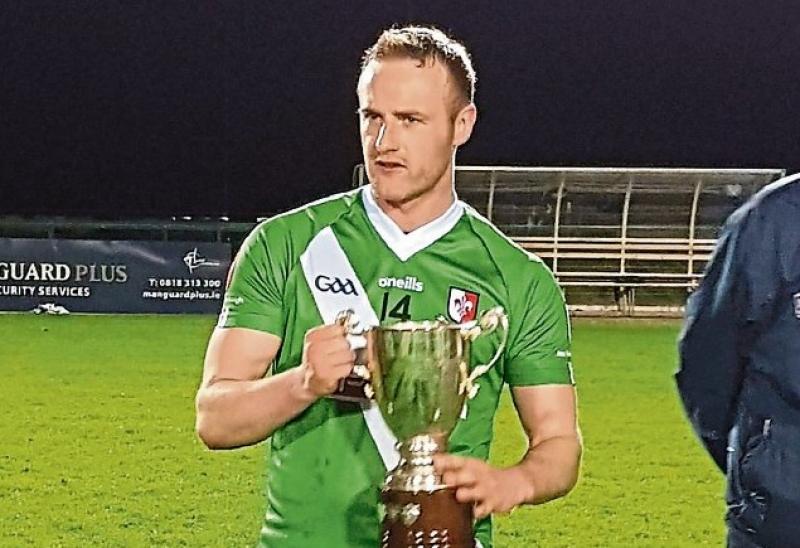 It may have taken all of eighty minutes but Sarsfields eventually did enough to claim the Aldridge Cup with victory over Carbury on last night.

Sarsfields looked in real trouble when trailing 2-10 to 0-10 halfway through the second half but they rallied strongly late on to force extra time with Cian Scanlon adding a last second equaliser.

Paul Doyle’s side then went up a level in overtime and even though Terry Rossiter scored a late goal the Sash held on for the three-point win.

Carbury started the game in style with an opening minute Stephen McGlynn point before James Kelly found the net.

Sarsfields levelled things up at 1-1 to 0-4 minutes later as Gary White, Diarmuid Hartley, Cian Costigan and Con Kavanagh all found the target.

Carbury hit back again though with points from Kelly and Eoghan O’Flaherty while Jack Cully got their second goal in the 14 th minute when he took advantage of a poor Andy O’Brien kickout to give the North Kildare side a 2-3 to 0-4 lead.

Declan Conroy made the first of many saves for Carbury in the 15th minute from a Diarmuid Hartley effort and the teams then shared scores with Ray Cahill, Alan Smith and Con Kavanagh finding the target for the Sash with McGlynn, Kelly, O’Flaherty and Dale Redmond scoring for Carbury to give them a 2-8 to 0-8 lead at the break.

Sarsfields reduced the lead to four points during the opening of the second period with substitute Dan Nea firing over a fine point with Alan Smith then converting a free. O’Flaherty reclaimed Carbury’s advantage with consecutive frees but they were their only scores of the half as they went the whole thirty minutes without registering from play.

As a result Sarsfields gradually ate into the lead with quick-fire scores from Cian Scanlon and Ronan Fitzgibbon while Alan Smith had an excellent chance for goal but Conroy stood tall to deny him.

Scanlon, Kavanagh and Gary White kicked scores to get within a point entering stoppage time and when it looked like they may fall short, Scanlon stood up and landed a monster of a point from 45 yards out to force extra time.

Sarsfields then continued where they left off in extra time as they stormed ahead kicking four points in the opening half with a double from Nea and further scores from Scanlon and Smith with just a McGlynn point in response leaving Sarsfields with a 0-20 to 2-11 lead.

O’Flaherty kicked an early free in the second period before Costigan and Smith found the target again to keep a four-point lead.

Carbury threw everything at it in the final minutes with Brian O’Flaherty having a shot blocked before the evergreen Terry Rossiter forced in a goal to get within a point and just when it looked like that may be deadlocked again, Nea and Shane Doyle scored late points to give the Sash the win.