Racing phases - vital part of the week's work at Punchestown

It's important to sound like you know what your talking about 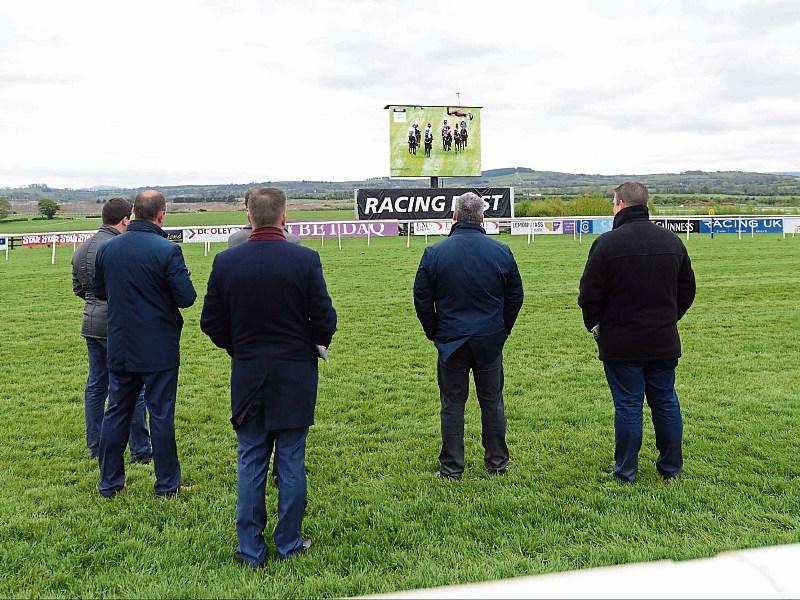 This Punchestown Phrase Book comes with appropriate explanations - so you can give the impression you’re an old hand at this.

During the Wimbledon of our youth we were tennis players for a couple weeks in July and experts on international soccer every four years for the duration of the World Cup.

Some of you watched the Winter Olympics with a knowledgeable eye, bobsleighing, curling and snowboarding your way to Pyeongchang in February.

Likewise, for a few days towards the end of Spring we’re horseracing experts when the curtains come down on the National Hunt season in spectacular fashion, just outside Naas.

So here’s a few comments you can throw throw out during the five day Punchestown Festival.

There will be many large diesel-powered vehicles bringing visitors to Punches-
town for the festival; but this is a reference to the size of the horse you fancy.

For many fans the more solid looking the animal the more easily it’ll get around the track and over the fences.

l I wouldn’t put him up on a rockin horse

This one puts the jockey in the firing line. For some it’s fair enough to blame the jockey when your horse finishes some distance behind the winner.

l He wouldn’t train ivy up a wall

This time you’re blaming the trainer for your woes. There may be a multiplicity of reasons for backing a loser but the trainer or the jockey are generally front-of-house when it comes to apportioning blame.

And the fact that most of us have never been up on a horse or wouldn’t know how to begin to train one is an irrelevancy.

You wouldn’t, unless you’re Usain Bolt and the distance was maybe 20 metres. Anyway, this time we’re saying the horse isn’t up to the pace of the race.

l That horse wants a bog

No, the horse doesn’t have a longing to take up residence in the outer reaches of Ballyteague, Rathangan, Allenwood or Timahoe.

Some horses prefer the ground they race on to be soft; others like a surface that hasn’t seen rain for a fair while.

This one prefers to be brought to a racecourse that has had lots and lots of rain thus making the going heavy.

l He wasn’t up to see what won

Best expressed as you convert your betting docket into confetti after your horse has finished say in the last five of a 30 horse race.

If your horse manages to win by 15 metres or more it’s almost as if it could become something of a gymnast as well as a runner. That’d be a first - Altior cartwheeling past the finishing post in Punchestown.

l That yoke would have you in the poorhouse

The poorhouses of Ireland are gone. Though appropriately enough there is one, or the remains of one, near Naas Hospital on the Craddockstown route to the famous racecourse.

Also, losing racehorses have survived the poorhouses and, alas, will always be with us. And if you’ve a fondness for backing one repeatedly with no success then the above can be tossed out.

With apologies to mothers-in-law everywhere, this is in fact directed at the horse. National Hunt racing is run over longer distances than those that run on the flat at the Curragh, Naas (though Naas also hosts National Hunt meetings) or Leopardstown. So, for a long distance race you need an animal that can go at a consistently good pace for two and half miles.

Deployed during chase races (the big fences) rather than a hurdles (the smaller obstacles) races. The higher the horse jumps the better the form it’s in for that race and this can be uttered if your choice is comfortably clearing the fences.

Ok, so goat racing is not an official sport that we know of. But you can imagine how ungainly a goat would appear in a long race. To be used strictly when your horse bombs out and you’re wondering if your selections are so bad that you’ll hardly have the price of a pint at the end of the festival.

l He won from here to Sallins

Oh the joy of it. To back a winner that wins easily brings a unique gaiety to the heart. In Naas many punters substitute Sallins with “the Town Hall.” If only they all performed half as well.

In these parts horses once pulled barges along the Grand Canal. Horses don’t pull locomotives but when you’re watching your horse out in front, pulling clear and she looks the certain winner this is the phrase to deploy.

l He’s baytin’ the arse off him

If there’s a bit to go in the race and you notice the jockey is cajoling his steed with some enthusiasm it generally doesn’t bode well.

Using this at least demonstrates that you know you could be in for an early night.