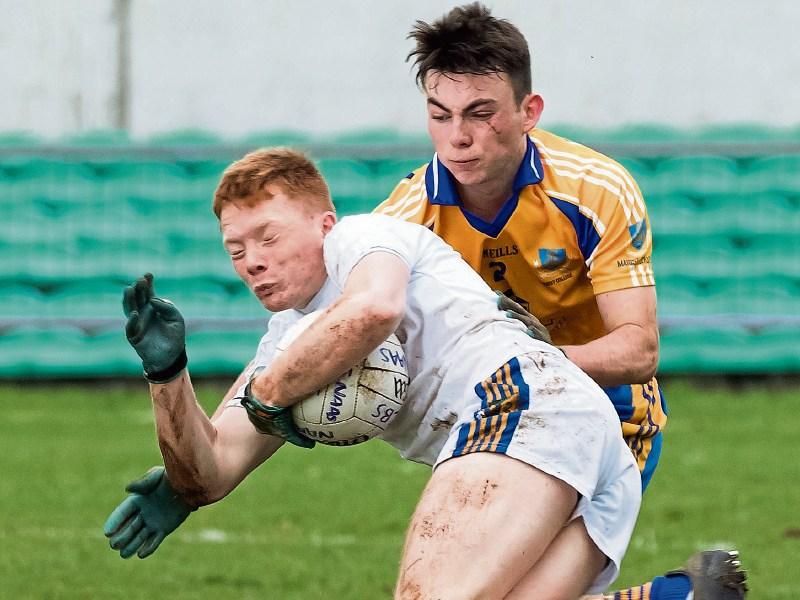 Luke Griffin of Naas CBS turns inside the challenge of Keelan Connor from Marist College, Athlone during the Leinster Final

Naas CBS step into the unknown on Friday when they take on Rice College of Westport at Padraig Pearses, Woodmount, Roscommon, in the Masita All Ireland Schools Senior Football Championship semi final with a 12.30 throw-in.

With Naas putting their name on the Leinster Senior 'A' Roll of Honour for the very first time and being the first ever Kildare school to do so, Friday's game is certainly heading into unknown territory.

While Friday is not, supporters-wise, the best day to play the semi final, it is understood that it is on that day as a pre-arranged school Easter Tour is scheduled to commence the next day.

Just like Naas CBS, Rice College also made history this year by also collecting the school's first ever provincial title, defeating St. Attracta's, Tubbercurry, which incidentally was Tubbercurry's third time in three years and their fourth in five seasons to be beaten in the final.

No doubt Naas CBS management team led by Ronan Joyce, including selectors Shane Guinness and Alan Cullagh and coach Cormac Kirwan, will be concentrating on their own team rather than unduly worrying about the opposition.

In the Leinster final, Naas showed once again they are a decent team, with a good work rate; tight at the back and strong in the middle and while they only scored nine points to win the Leinster final conditions were certainly not conductive to open, attacking football.

Naas full back line of Eoghan Prizeman, Conall Ó Gallchobhair and Jack Hamill certainly did their stuff and while the no. 3 was forced off with an injury, in the Leinster final, hopefully he will be fit for Friday; he did not look comfortable against Marist and was eventually forced off.

The half back line were also alert, tuned in and up for the battle that day with centre back Jack Sargent holding his line while Cathal Daly was awarded the man of the match award.

Midfield was decent, the loss of Rian Boran to a second yellow didn't help but overall they played well. Up front Naas threatened and one feels if they can get the ball in quickly, especially to their full forward line of Colm Joyce, Luke Griffin and Darragh Kirwan they have the ability to unlock defences.

Killian Thompson at no 12 is another fine players while both Tony O'Connor and Barry Keogh can be happy with their contributions.

All the lads that came in off the bench made their mark with Aaron Deegan in particular catching the eye. Nothing easy at this stage of any major competition but one can certainly feel that if Naas can play to their full potential they must be in their with a great chance of booking a place in the All Ireland decider.