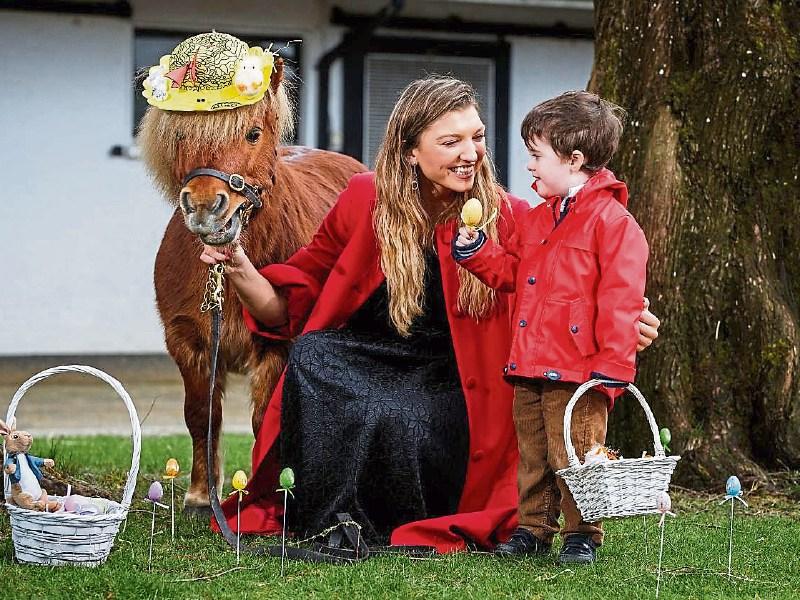 Model and Dancing with the Stars contestant, Alannah Beirne pictured with Sonny O'Brien (3) and Homer the Falabella launch the first flat race meeting of the season at Naas Racecourse

The flat season returns this Sunday March 25, with the ever popular Naas venue hosting the opening meeting.

This will be the Woodlands venue second year in a row to open the Flat season and it promises to be anoother top class racing on this very testing track.

As usual at Naas, it is not all about the racing as the entire family will be catered for with the special guest on the day, the Easter Bunny.

For the youngesters there will also be an Easter Egg Trail to keep them well occupied.

The feature race of the day is the Lodge Park Stud EBF Express Stakes and the Tote Irish Lincolnshire. This is another major landmark for Naas Racecourse, who hosted the opening meeting of the flat season for the first time ever in 2017.

This year there are 11 flat race meetings pencilled in for Naas Racecourse, who will also close the season with the final meeting on Sunday November 4.

Speaking ahead of the first flat race meeting of the year, Naas Racecourse Manager Tom Ryan said “We’re delighted to be hosting the opening meeting of the flat racing season and I have no doubt that it will prove to be just as enjoyable and successful as last year.

“We are constantly striving to improve Naas Racecourse both on and off the track, and the improve-
ments made to our flat racing course last year ensures that we have one of the best facilities in Ireland.

“We were very happy with the way the season went last year, and with 11 more flat meetings on the cards this year we will be busy once again.

“For those who haven’t seen the brilliant new developments that have recently been opened at Naas Racecourse, Sunday gives people an excellent opportunity to get a look around them. The Circle, which boasts fantastic views of the track and the parade ring, is one of the most impressive racetrack facilities in Ireland at present

“There will also be plenty of Easter activities for the kids on Sunday too, and we’re looking forward to welcoming families down for what promises to be a great day.”