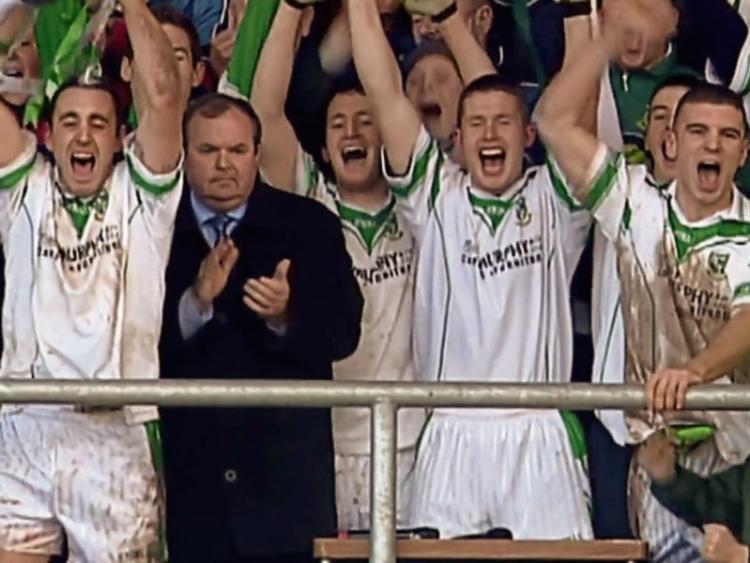 
Sunday December 3, 2006, there was a wind blowing that threatened to ensure there would be no football that day.

We headed for Portlaoise, half in the expectation the game would never take place due to the conditions but the Leinster Club Football final got the go ahead as Kildare champions, Moorefield, took on hot pots and roaring favourites Rhode of Offaly.

It was a game that The Moores boss  said after the game was all about passion and belief.

“I knew we had a big game in us” said one of the Moorefield and Kildare's  greatest sons, Sos Dowling, adding “I knew what the lads were capable of; I have seen them since they were Under 14 and they have won every-

thing that came their way. We told them before the game, said an emotional Sos “this game was all about passion and all about belief” and added the former top class defencer, , “when it came to passion and belief we had that in bucketfuls.

Two first half goals, both from the penalty spot set up the Newbridge boys.

The first penalty arrived mid-way through the half, full forward Jason Philips was taken down and up stepped Roli Sweeney who made no mistake.

Less than ten minutes later and Philips, who caused the Rhode defence problems all day long, was again fouled; a calm, cool and collected Sweeney again hit the sack and when half time arrived the boys in green led their more illustrious opponents 2-2 to 0-6.

There was still just two points separating the sides when a move that began at the back by Ian Lonergan ended with second half substitute David Whyte finding the Rhode net for the third time; Patrick Murray quickly added a point and The Moores were on their way to taking the club's first Leinster Club and only the county's second provincial title, Raheens being the other club side to get their hands on this prestigious trophy.

Rhode had won three county titles in a row in 2006 and Moorefield's opponents on Sunday, St Loman's find themselves in exactly the same position.

Is that an omen?

The final score back in 2006 read Moorefield 3-6 Rhode 0-8 and it was indeed a very proud Moorefield captain, Kenny Duane, who accpeted the cup on behalf of his team.