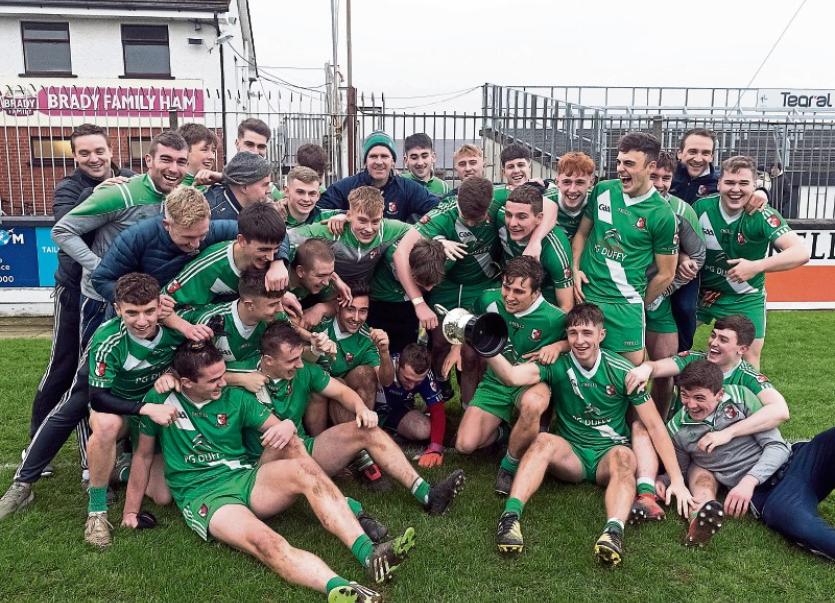 After a week of absolute heartbreak for all at the Sarsfields Club, the boys with the sash on their shirts brought some joy with a thoroughly deserved win over Athy in the final of the Tony Donohoe sponsored U21 'A' football final played at St Conleth's Park, Newbridge, on Sunday afternoon.

Team manager, Seán O'Sullivan said after the game, “that what we have all gone through over the past week or so we were never going to let this one get away.”

And how right he was.

It was a game for the best part of 45 minutes or so it was dull, boring, littered with errors, poor handling, not to mention some dreadful shooting.

Then, with Sarsfields, rather comfortably by 0-8 to 0-2, Athy got themselves back into it with a goal from Kieran Farrell, suddenly we got more or less what we had hoped for between two teams that have some top class players between them.

Suddenly an urgency and an intensity, missing heretofore, and the decent attendance had at last something to cheer about, for both sides.

Sarsfields line out without their captain, Ben McCormack, the county man out of action with a fractured thumb, along with a few more lads it has to be said.

Seán Dempsey, who was the top man in the semi final for Sarsfields, opened the scoring on Sunday, converting a free after new dad Cian Byrne, was fouled, and Dempsey doubled his, and his side's tally, five minutes later with another free after Athy were punished for over carrying.

John Moran, who has had an excellent U21 campaign, hit a beauty of a left footed point to open the boys in red account on 11 minutes.

To say this game was a slow burner would not be an over exaggeration, in fact at times it seemed to be barely simmering away on the back boiler with no one grabbing it by the scuff of the neck.

Con Whelan added two points, the second an excel-
lent long range effort but Tony Martin converted a free for Athy to make it 0-4 to 0-2 with 18 minutes on the clock.

Incredibly that was Athy's lot for the entire half as Sarsfields sort of kicked on, without overly exercising themselves.

Conor Delahunty got the first of his points on 20 after a move involving Seán Dempsey.

Fintan Lawler had a squeak of a goal chance but his effort was blocked and cleared.

It certainly wasn't Lawler's day as minutes later he picked up a black card as Conor Delahunty pointed after a brilliant catch by Con Kavanagh.

A four man move ended with midfielder David Marnell firing over to leave the half time score reading Sarsfields 0-7 Athy 0-2 on a bitterly cold day that the football on show did little to warm up the fans.

On the resumption Athy full forward Tadhg Foley had a goal chance but Rob Abbott managed to get a hand to the ball, knocking it out for a 45, which came to nothing.

It took ten minutes of the half before the opening point arrived, Con Whelan finding the range, having failed to spot Seán Dempsey inside and all alone.

Mid-way through and the score reading Sarsfields 0-8 Athy 0-2, the boys in red gave themselves a lifeline when Brian Maher cut inside the Sarsfields defence firing lot to the corner of the Sarsfields' net.

Not alone did the attendance come to life but so did the teams, and Athy in particular, with two quick points from Rory Feely (45) and Kieran Farrell to leave just a single point separating the sides.

Con Whelan eased the Sarsfields' concerns but Rory Feely soloed some 30 yards, lost control but keeping the ball on the ground blasted it high and over.

Barry Kelly and Rory Feely combined for the latter to bear down on the Athy goal but his left footed effort went right and wide.

A few minutes later, Cian Costigan, a second half substitute saw his effort being kept out of the net by Athy keeper Matthew Anderson but Seán Dempsey was on hand to force the ball over the line; a Con Whelan converted free edged the Newbridge boys ahead 1-11 to 1-4 with 51 minutes on the clock.

But Athy kept plugging away, a brilliant fetch by Rory Feely and he sent the ball in long and high where full forward Tadhg Foley out-jumped his marker to punch to the net and when Tony Martin (free) and Kieran Farrell added two there was just two between the sides again.

Sensing danger though, Sarsfields lifted their game again with Conor Delahunty blasting to the net after Athy were turnedover and inside a minute the same player was through again, a goal looked likely but his effort went high and over.