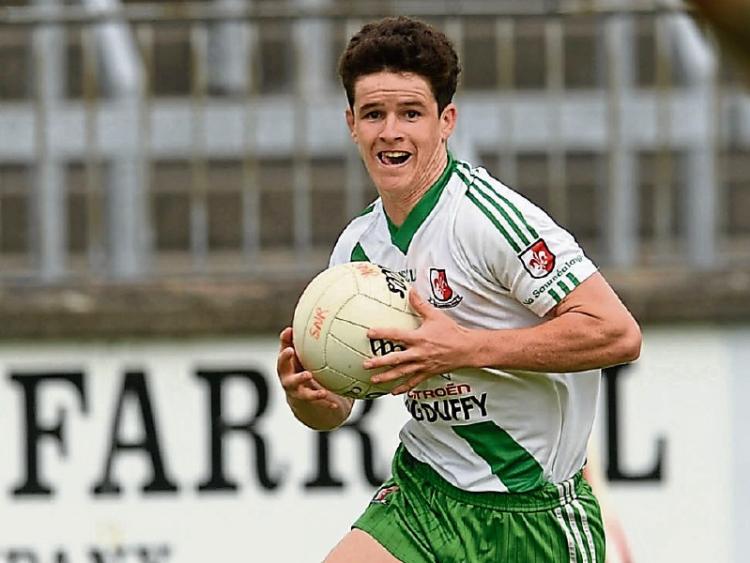 Cian Byrne, excellent game on the half back line for Sarsfields against Clane in the Tony Donohoe U21 semi final in Hawkfield on Saturday

Conditions were damp, miserable with constant rain, far from conducive to good football as they Tony Donohoe U21 football semi final got under way at Hawkfield Centre of Excellence at 5pm on Saturday (November 11).

But it's hats off to both Sarsfields and Clane for serving up an excellent, competitive game, with no shortage of decent football that in the end saw the Newbridge advance to the final and a clash with Athy.

In the end it was The Sash's ability to find the net that was the difference between the sides while Clane were in this game for long periods they never really threatened the Sarsfields goals at any stage.

Forced to line out without the injured Ben McCormack, broken thumb we were told but introduced with a few minutes remaining when the game was done and dusted was certainly taking a big risk; while also missing was Cian Scanlon and Cian Costigan from the listed team. Clane lined out as selected.

It was Seán Dempsey who got proceedings under way for Sarsfields, firstly converting a free then kicking a screamer of a point from wide on the left.

Clane slowly got into the game and by the tenth minute were on level terms with points from  Kyle Devey, who caused a lot problems throughout, and a Brian McLoughlin free.

Kyle Devey had the boys in white in front two minutes later when cutting in from right hand wing along the end line before punching over.

Sarsfields came back with a vengeance when Shane Doyle, a player that has a great knack of finding opponents' net, held off three defenders before blasting home.

It was indeed a lively  game at this stage, both sides playing open attacking football and Sarsfields looked to be in again but Seán Dempsey saw his shot fly over the bar before Clane had a somewhat similar chance but strong defending saw Jake Devey blast his shot wide of the target.

Kyle Devey had a shot brilliantly blocked but the ball broke back to the Clane no. 13 and this time he fired over and when Brian McLoughlin landed a free it left the half time score reading Clane 0-7 Sarsfields 1-3.

It took just three minutes to level up the game on the resumption, Seán Dempsey converting a free but Brian McLoughlin hit back to level up matters inside a minute.

Dempsey edged The Sash ahead before Darragh Ryan came through the Clane defence like a train before blasting to the net for a brilliant goal and when Seán Dempsey added a free Sarsfields now led 2-6 to 0-8, forty minutes on the clock.

Brian McLoughlin reduced the deficit with a free before a brilliant move saw Shane O'Sullivan split the posts.

Kyle Devey punched over to leave the score reading Sarsfields 2-8 Clane 0-12, 53 minutes on the clock.

A couple of minutes later though the game was finally done and dusted when a high ball in from Con Whelan broke in the  square and in like a flash Shane Doyle pulled first time and filled the onion sack for the second time in the game.

Clane hit back with a point from Seán Callan and a Brian McLoughlin free before Con Whelan hit a cracker from the outside of his boot and while Seán Callan could have been awarded a penalty for what looked to many to be  a foot block there was no denying Sarsfields as the final whistle arrived with the Newbridge lads advancing to the decider on a final score of Sarsfields 3-10 Clane 0-14.