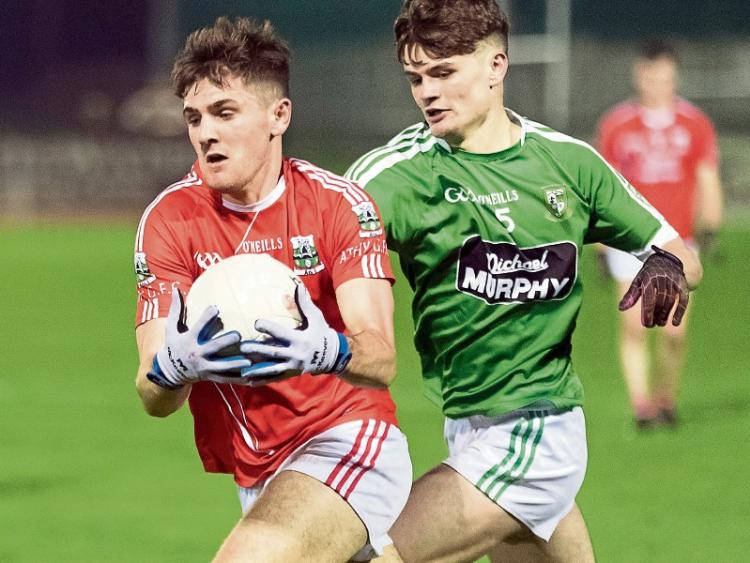 In a game that was tight all the way through the boys from the south of the county hung in trailing by two points for most the second half but got their reward with that penalty three from the end.

Up stepped Rory Feely who made no mistake from the spot to give Athy the lead they had last held on 18 minutes.

Moorefield through everything they had at Athy in search of equaliser but it never arrived and it is Athy who march on to the decider where they will meet the winners of hot favourites Sarsfields or Clane.

The game itself was an enjoyable affair and while the greasy conditions made handling that little bit difficult it was Athy who opened through a Tony Martin free quickly followed by a point from play from the same player.

Slowly Moorefield got into it with Evan Kavanagh doing extremely well in the middle and two points from Mark Murray had the sides level on ten minutes.

Rory Feely converted a free for Athy but back came Moorefield with Conor McLoughlin, who caused the Athy full back line all sorts of trouble throughout, leveled before Ian Meehan was fouled and Mark Murray had The Moores one clear on 26 minutes.

Tony Martin, who followed up an impressive showing against Raheens in the quarter final with another top class game against Moorefield sent the sides into the half time break level at 0-4 apiece.

Mark Dempsey and Tony Martin exchanged points before Ian Meehan, showing great pace, edged The Moores one clear. Colin McLoughlin had the ball in the Athy net but referee Ray Kelly ruled it out for a free but McLoughlin was again in the thick of things this time fouled inside and Mark Murray made no mistake, edging his side two clear on 51.

Tony Martin and Jordan McGrath exchanged points before that penalty goal in the 57 minutes, that saw Seán Healy picked up a second yellow as Rory Feely held his nerve to find the net and secure Athy a win that looked unlikely for a lot of the second half, and a place in the final.

The second semi between Clane and Sarsfields takes place this Saturday, November 11 at 4pm in Hawkfield.