Leinster club SFC: Moorefield facing a stiff task as they take on Portlaoise 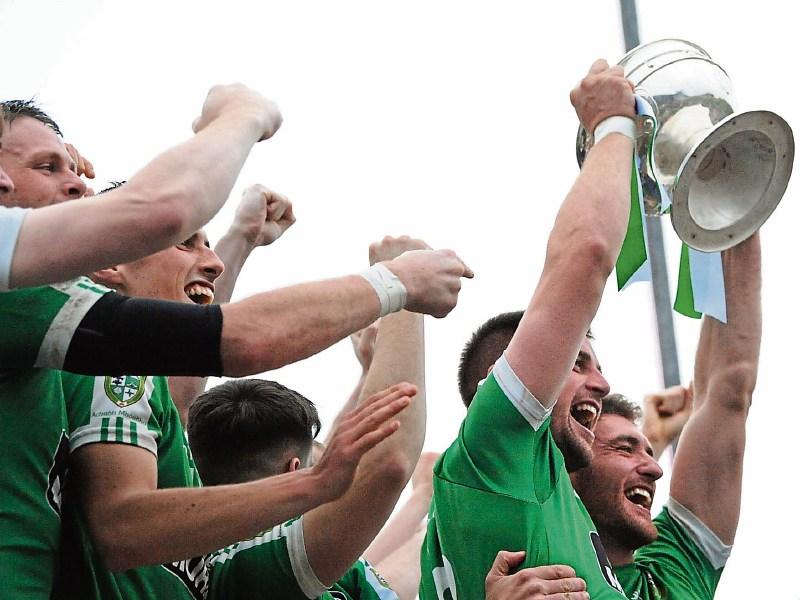 Daryl Flynn and David Whyte of Moorefield celebrate with the cup after victory over Celbridge in the SFC 2017. PHOTO: Adrian Melia

When it comes to the AIB Leinster Club Senior Football Championship, there are no easy games and that is for sure.

Playing away from home makes the task that bit more difficult; lining out without two of your experienced players does not help but that is what awaits Moorefield on Sunday as they travel to Portlaoise to take on the vastly experienced home side, Portlaoise.

On top of that Portlaoise already have a game under their belts in this competition as that is always a huge advantage but having said that Moorefield are one of those clubs who simply roll up the sleeves, get stuck in regardless of the circumstances.

That was never more evident than it was in this season's Kildare SFC when, despite down to 13 men for over forty minutes refused to lie down and roll over and dug out a memorable victory over a Celbridge side, with a handful of seasoned and experienced county players.

Needless to say Sunday's clash with Portlaoise will be a game of a different colour.

One of the most experienced clubs in Leinster, Portlaoise have no less than seven Leinster titles and, along with St Vincent's are on top of the Leinster Club Roll of Honour.

With 33 county titles, twelve since 2000, the boys from Portlaoise will come into this one as warm favourites, but that is something that will have little effect on Moorefield.

So far this has been an incredible season for The Moores, winning the SFL Division 1 title defeating Naas when all looked loss at one stage and then capturing the Kildare SFC with wins over 2016 champions Sarsfields followed with victories over Athy and Celbridge in the final.

This season's win brings Moorefield's tally to eight county titles since 2000, nine in total, no mean achievement and that's for sure.

Portlaoise defeated Rhode of Offaly in their opening round clash, 1-10 to 0-10 in a game that was dogged and tense as the Offaly boys fought their way back to get within two points with six minutes remaining, having trailed at the break by 1-8 to 0-6.

Not for the first time Brian Bruno McCormack was Portlaoise's main man, especially in that opening half but when you add in the experienced Paul Cahilane and the youthful Frank Flanagan they are a trio, amongst others, that Moorefield will have to close down if they are to succeed.

The Moores come into this one without the services of long serving midfielder Daryl Flynn and the experienced David Whyte.

They also have a few injuries worries while two lads heading overseas next week with the Defence Forces are also a concern as to their availability.

Moorefield manager Ross Glavin, maybe  in his first season as senior team manager with his native club but he has got most of the big calls spot on this season, along with his management team of Frank Hanniffy and Kevin O'Neill and they will certainly not fear Portlaoise.

How The Moores line out will be the big talking point this week.

In the absence of Flynn and Whyte, Roli Sweeney will be expecting to get a start from the word go; on the other hand it could be argued  that he can make a bigger impact when coming off the bench.

There is an excellent mix of youth and experience in this Moorefield squad; they have been playing well and having got the better of three of the top teams in Kildare in Sarsfields, Athy and Celbridge their confidence will be high, even without their two experienced players.

The Moores, the only Kildare team along with Raheens to have been crowned Leinster SFC Club champions, seem to play their best football when the odds are stacked against them, winning on Sunday would  go down as one of their greatest achievements but then again that would be  nothing new to these lads and to this club.