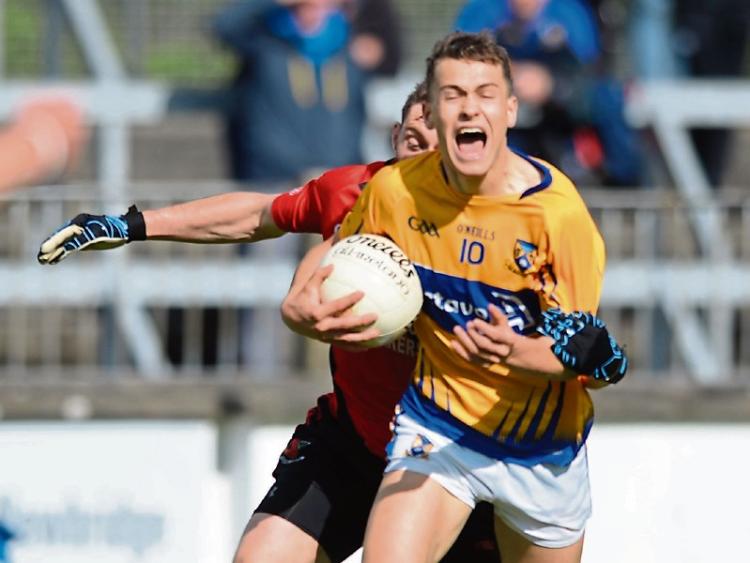 If ever their was a case of an older, wiser and cuter team taking on a younger, naive and inexperienced side  Saturday's AIB Intermediate Club Football quarter final between Kilanerin of Wexford and Raheens of Kildare was it.

Played at the picturesque Pairc Uí Siocháin grounds in Gorey, for long periods Raheens were on top but lacked penetration, accuracy, and at times a bit of discipline, against a well marshaled side that knew what they were about, got lots of bodies behind the ball when it was needed  but more importantly knew how to achieve a result despite coughing up lots of possession, particularly in the second half.

The fact that the Wexford champions were playing their second game in this competition against a Raheens side who were non competitive since winning their championship some four weeks ago, was also  a big plus for the winners.

Former Wexford All Star, Matty Forde, his county's only footballer to receive that honour, was instrumental in a lot of the good things from his side.

Forde used every bit of his vast experience from his glory days, he was involved in everything from the throw in, continually questioning the match officials' decisions; continually involved in everything and anything; continually hitting the deck but in the end  and despite picking up a second yellow card in the 54 minute, have no doubt Kilanerin would not have succeeded in booking a place in this season's Leinster IFC Club semi final without their no. 11.

Raheens will wonder for some time how they did not manager to get through this one but they never really settled, never showed anything like the form they are capable of while some of their decision making and shot selection was poor in the extreme.

On a lovely dry but cold afternoon it was the visitors who had the breeze on their backs in the opening half and the fact they led by just a point at the break certainly sent out a warning that a big second half would be required after an opening half that rarely if ever came to life.

It was Forde who opened after a minute from a free before Paddy Woodgate replied with his only score of the game, from a placed ball.

A few skirmishes kept the match official on his toes but the Carlow ref had a good game, was far from whistle happy and any free awarded had to be earned and that's for sure.

Niall Hughes edged Kilanerin in front after 13 minutes as Conor Early and Matty Forde were issued with yellows.

Niall Breen, a big strong midfielder, put two in it but John Jennings set up David Fitzpatrick for an excellent point.

Two minutes later a foul on Rory Donnelly saw Paddy Woodgate hit the upright from 20m, the ball came back to him but the no. 11 fired it right and wide.

Conor Early set up David Malone but unusually the wing forward failed to find the posts.

Raheens then failed to capitalise on a poor kick out which went straight to Woodgate but his weak effort was blocked out for a 45 which was ultimately cleared.

Eventually after dominating but failing to put anything of note  on the score board a move involving John Jennings, David Fitzpatrick, Paddy Woodgate ended with David Malone, Raheens best player by a country mile, scoring the type of point we expected from Raheens to level it up at 0-4 apiece.

Good work from Liam Power saw him set up Rory Hannick who punched over but the home side reduce the gap to one before the break, Mark Boland firing over a free to leave it Raheens 0-5 Kilanerin 0-4 as the sides headed for the dressing rooms.

Within two minutes of the resumption the sides were level Matty Forde converting a free, a free that was brought forward into range after indiscipline from Raheens.

Forde edged his side ahead on 36 minutes with a point from play but it was Raheens who were to take control around the middle but found it near impossible to break a resolute defence and to compound matters when opportunities arose they simply could not find the posts as they began clocking up wides with alarming regularity.

Rory Donnelly ended a barren spell raising a white flag but in a rare attack Dean O'Toole regained the lead for the Wexford champions.

Raheens continued to have the bulk of possession and when David Malone and Liam Power added points they led by one with 49 minutes on the clock.

Could they now at last kick on and book a semi final spot we wondered but the answer was definitely in the negative as they simply failed to capitalise on their outfield superiority.

Colm Kavanagh left his defensive duties at no. 6 to get forward and level as Alan Igoe saw a 'holy water' effort go left and wide.

A bit of indiscipline saw a Raheens free turned into a throw ball and from this Matty Forde received a second yellow and  an early shower.

A ball from Mark Waters right across the square looked dangerous but Alan Igoe just failed to make contact for what would have been a vital goal.

Against the run of play Peter Hughes edged Kilanerin ahead followed by a converted free from Niall Hughes as David Malone picked up a black card and with time running out there was no way back for Raheens as the final whistle arrived Kilanerin winning out by two points 0-10 to 0-8.

A disappointing ending to what was nevertheless an excellent season for Raheens who retained their SFL Division 1 status, won the intermediate championship and now return to the senior ranks.

Manager Declan O'Toole who said at the start of the season this would be his last year in charge, confirmed his decision to step down, thus adding to the growing list of senior club team managerial  vacancies in Kildare for next season.