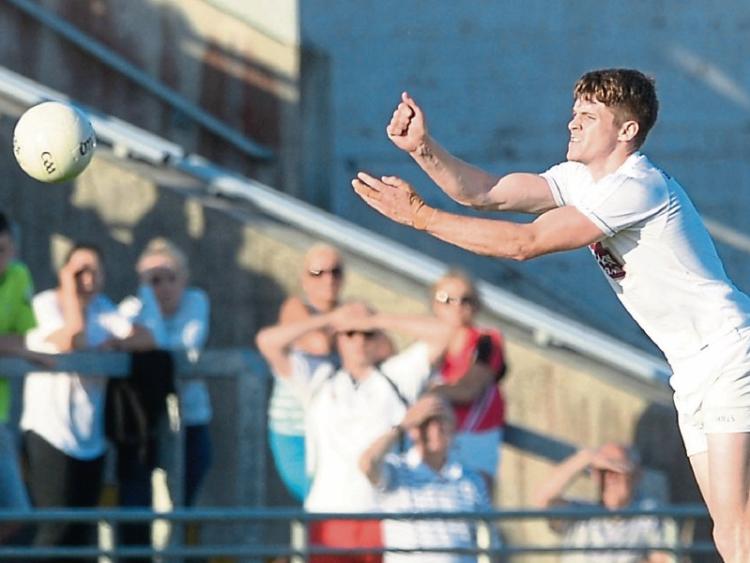 First things first and it's congratulations to Kevin Feely of Athy on his selection as a member of Joe Kernan's panel for the 2017 International Rules Series and their two games trip to Australia on November 12 and 18.

It is always great to see a Kildare player involved with such a squad the main pity being that Feely is the only Lilywhite to be named, although others did participate in trials.

With the senior football championship just finished in Kildare it has to be said that while county lads did perform exceptionally well early on, it became very obvious in the latter stages that many failed to produce the form we know they are capable of.

Not saying that had anything to do why just one Kildare player is  'on board' for the series but the chances are if those who were brought in for trials performed at the same level as they did when playing with their clubs, it is entirely understandable.

Which begs the question is the poor form of many of our county lads simply down to feeling the strain of a long and tough season or, on the other hand, a case that seems to occur throughout the country where members of county panels often fail to play to anything near their potential, when they return to the clubs.

I have to say though, that while welcoming Feely's selection, on a personal note, this International Rules thing  does absolutely nothing for me.

Maybe back in the initial series when interest was huge, I, like most GAA folk went to Croker and was somewhat enthralled at the goings on but as time went by, for me at least, it diminished and diminished dramatically.

Having said that in the earlier days of the Series I can recall  travelling to see even trial games in Drumcondra such was the standing of the series, sadly that is far from the case these days.

At it's peak it was some craic and while the authorities moved swiftly to tone matters down, unfortunate-

ly once the physicality went out of the game so did the excitement, so did the attraction for many.

While by no means trying to downgrade or take from the achievement of being selected on the squad, this spectacle would seem to be losing a lot of its aura. It is by its vary nature a hybrid game, and in fairness, it can't be anything else, but on the plus side it does give lads the opportunity to play for their country; an opportunity to visit Australia and an opportunity of a hell of a good trip.

Of course some players will always, and always have, opted out of being included for various, and genuine  reasons such as injuries, work commitments and club commitments.

However over the years we have seen the club commitments being overcome on more than one occasion, as ever, if their is a will there is a way.

There are two aspects of the 2017 Series and its make-up that stand out like a sore thumb.

The first being that manager Joe Kernan seemed to spend as much time in interviews naming players he would have liked to have than actually concentrating on the players that he has finally selected and got to commit to the series.

The second stand-out is the non-availability of Dublin players.

Of course it has been a long season for Dublin; in fact one can say a long three seasons for Dublin but one could say the same of Mayo and not alone are they represented but their talisman, Aidan O'Shea is also the captain.

mitments, but so too does every other county man.

I have to say I don't for one minute buy into the theory that each and every Dublin player that was asked to commit declined the offer for one or any of the above reasons.

One can be forgiven for thinking that Dublin with all their success are so well looked after these days, that a trip to represent their country in Australia is simply not as attractive as it was heretofore.

Can you imagine Dublin players saying to Kevin Heffernan when he was manager back in the years, no thanks Kevin, I'm tired, etc, etc, etc.

I have to say it seems from afar that Dublin have now gone so far ahead of the rest of the counties that even an all expenses paid trip, will all the perks (and there are many of them) is simply not an option any more.

Some might suggest that the Boys in Blue have become insular, self centred, or even  'have gotton too big for their boots' if you pardon the pun.

Joe Kernan and his management team can put whatever spin they like on it but a team representing Ireland with not one member of the three-in-a-row All Ireland champions, can only be described as a weakened team; possibly even a flawed team.

Yes, of course Kernan cast his net wide for the make-up of his panel of 2017.

In all there is something like fourteen counties represented and while the make-up of the final squad may not have been what the manager wanted (on his own admission)  nevertheless it must be a great feeling for players from counties, not regarded as strong, getting the nod, and good luck to them.

Hopefully all goes well for Kernan and his backroom people including Pádraic Joyce from Galway, our own Dermot Earley (GPA CEO) and Kerry’s Darragh Ó Sé.

It's ironic that while the squad is made up of many players who may not be instantly recognisable at first glance, the same cannot be said for the backroom people.

Manager Kernan must have felt relieved that, unlike many he asked to be involved as players but declined, he had no such problems when it came to his selectors!