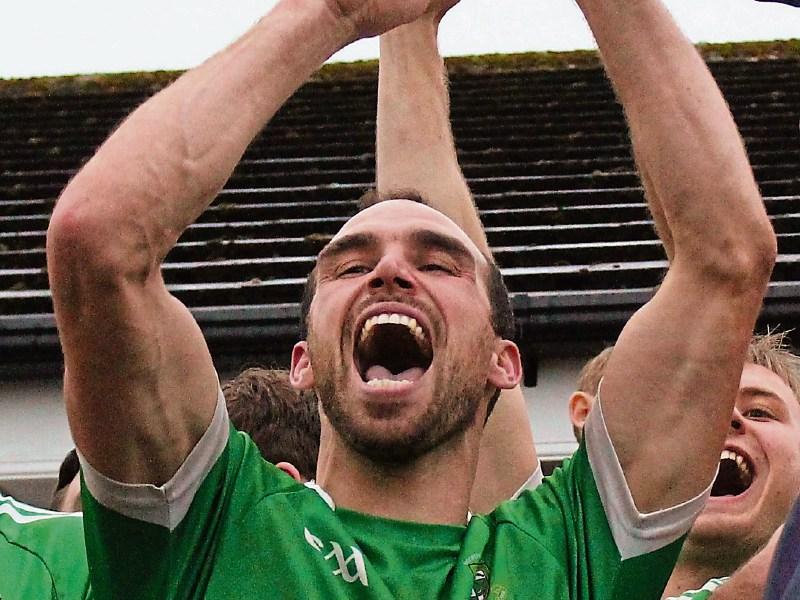 Moorefield are back at the top table for the first time since 2014 and while they have been there and done it, last Sunday was very special even by their own fledging standards.

Two men down and a penalty miss and they still manage to get over the line says it all in a day that will go down in Moorefield folklore.

Even Ronan Sweeney who picked up his eighth county medal admits it was probably the best of the lot.

“In those circumstances to be able to pull together and get a result with 13 men against 15 is remarkable in itself but I think it shows what we are about as a club.

“We are just a real honest team that can deal with the sort of setbacks like a penalty miss and two sending offs and we didn’t panic. We fought for every ball, harassed everybody and never gave up.

“This is probably the best win of the lot yeah”.

“Daryl Flynn and David Whyte had been playing very well and they were our leaders but that’s the thing about Moorefield we are full of leaders and we always have someone else to stand up. It was a fine performance there at times”.

It was the longest Sweeney has played in any of the games this year and although not happy being on the bench he was happy to play a part in another great day for the club.

“It was tough, especially with two men down as I had to do a lot more running than in any of the other games. In fairness to Ross Glavin he told me to be ready to come in at any stage and I was. I wanted to start the game anyway and I had been pushing hard in training the last few weeks so I didn’t think fitness would be a problem”.

Speaking on the fact that many players admitted wanting to win this county title for him,

“It’s great to hear that but it certainly wasn’t the main focus of the group and it wasn’t really mentioned nor would I want that to be anyone’s motivation really. I had my own goals and stuff like that but it is nice to hear that and it shows how tight a group we are that people would actually think that way and it’s great.”

Moorefield had warriors all over the field but no more so than in the half back line and in Kevin Murnaghan in particular.

Murnaghan deservedly won man of the match and he led Moorefield from the back when things looking to be going wrong.

“The whole team just had to dig deep. When the two boys got sent off we knew that we’d have to dig deep and it’s the heart we have. We knew once we were down to 13 men that we had to defend strongly and support the half-forward line as best we could. It was tiring and tough but we did the best we could.

“This is one that will be remembered for a long, long time; we did it all for Roli, what a man.”