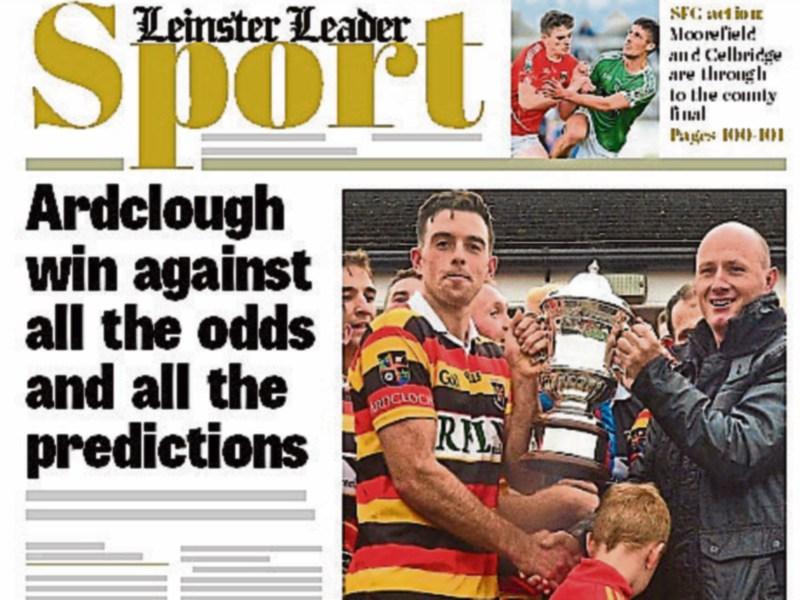 Ardclough win the SHC against all the odds and all the predictations: Extensive coverage, reaction and comment.

Celbridge and Moorefield are through to the SFC decider; reports of both games against Johnstownbridge and Athy respectively.

A weekend to savour on football and hurling fronts (Tommy Callaghan).

Lilies Ladies lose out to Armagh in U21 while Carbury Ladies make it through to the Leinster Club Ladies Junior semi final.

A look ahead to this weekend’s IFC final between Raheens and Kilcock.

On the golfing front, picture special as Naas host a fund raising day for newly turned professional Conor O’Rourke; all the results from the Fairways plus Gavin Lunny’s weekly golf tip.

Dogs: Three on the trot for Eugene Price at Newbridge Greyhound Stadium.

RacingAffairs: Robert Catterson writes on Aidan O’Brien, on the  brink of greatest year yet.

KDFL feature games include Newbrige Colts winning the Joe Rooney Women’s Cup after a penalty shoot out while Monread capture the Donnelly Cup in similar fashion. That, along with fixtures, reports, noticeboard and the up-to-date tables.

All that and much, much more in the redesigned and revamped Leinster Leader … in the shops now.