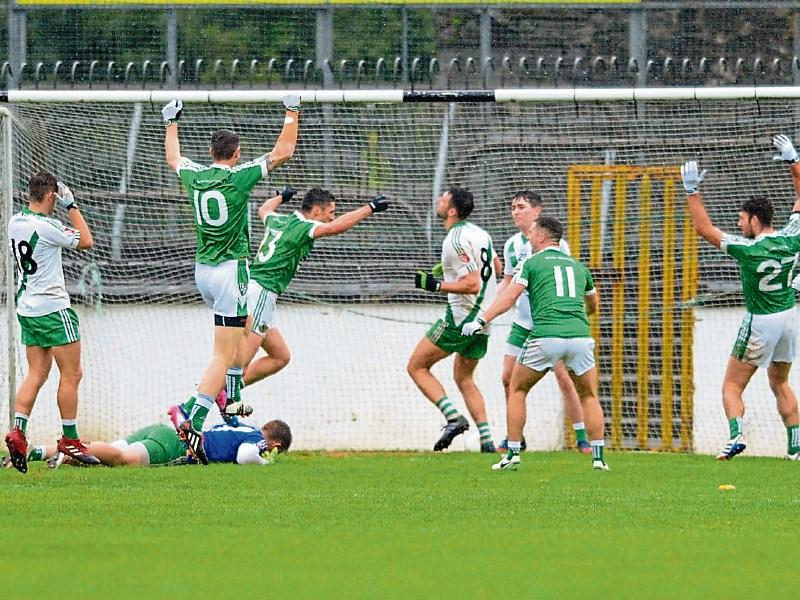 1.Shane McNamara (Celbridge): Shane's kickout's were superb throughout, he set the tone and every attack for Celbridge with picking his teammate's at ease. His kickout's will be key at trying to stretch the Johnstownbridge's midfield in the semi final. He is keeping Mark Donnellan from Kildare on his toes.

2.Liam Callaghan (Moorefield): Liam was dropped against Confey for the replay earlier in the Championship which could have been the best move by their manager Ross Glavin. Since being dropped he has been excellent, in the league final he was one of the best and he completely nulified Alan Smith on Saturday (who got taken off) but he also set up attacks and was disciplined in his tackling.

3.Luke Flynn (Johnstownbridge): Luke had the man marking job of Clane's biggest threat Brian McLoughlin and did a fine job. The Clane man got no score from play, he only scored free's not many of which he won. Luke's athletic presence was felt who he scored a great point that he started and finished. A player I would love to see commit to Kildare. Will have a great battle with Paddy Brophy in two week's time.

4.Liam Healy (Moorefield): This man was on the Kildare panel at the start of the year and you can see why. He did a fine job on Ben McCormack and cut out one of Sarsfield's main threat. He also has great pace to break the line and set up attacks. No doubt he will pick up Niall Kelly in two week's time which will be another step up.

5.Sean Ronan (Athy): A player that probably doesn't register with many people outside Athy. He was Athy's unsung hero in defence on Saturday, he won so many breaks and seemed to be in the right position for the majority of the game and his distribution was simple but very effective. A huge step up for him in two week's against the Moore's.

6.Seamus McNally (Johnstownbridge): Scored a great goal but isn't on this selection because of that, he and Luke Flynn set the tone for the JTB in defence, his physical presence was very impressive, breaking up any momentum that Clane tried to get going. Has a good reading of the game and showed that by playing the sweeping role at times to perfection.

7.Kevin Flynn (Celbridge): This man's pace is scary at time's, he broke the Naas defensive line at ease and set up many of Celbridge's attacks. He was given the man marking job of Eamon Callaghan at times and he prevailed. I am sure JTB took note of his threat but also a man that took note is surely Kildare's Cian O'Neill.

8.Kevin Feely (Athy): Watching this player is becoming such a treat, his fielding of the ball is one of the best I have seen. Him being right and left footed is a credit to the man and give's him a great advantage over his opponent's. Chipped in with two point's and is surely Moorefield's biggest worry.

9.Conor Brophy (Celbridge): Many people will argue that Fergal Conway should be ahead of him and I can see why but I feel this was one of Conor's best game's for Celbridge in a long time. He broke up play, he hit any Naas man (fairly) and got a good few turnover's. His distribution has changed this year, sometime's in the past he made the wrong choice's but Saturday showed he is maturing as a player. With Naas having such a weak midfield he and Fergal took advantage, he will have to raise his game even more to mark Sean Hurley in two week's.

10.Darroch Mulhall (Athy): Everyone know Darroch has the ability, it is getting him fit and becoming a team player which seemed to be the biggest test. Well he certainly answered the critic's as he was outstanding on Saturday. He is playing a much deeper role than usual, he is playing wing forward and is showing great work rate and chipped in with 4 great scores. Great to see him back at his best and interesting to see the role he is playing. Surely will be picked up by Moorefield's Mark Murnaghan in what will be a great battle.

11.Eddie Heavey (Moorefield): Scored two points at a vital stage in the game to get Moorefield off to a blistering start. He took the game to the Sash defender's and his finishing was slick and impressive. Is a player who seem's to relish in the Newbridge Derby. Will surely get picked up by a tracking Athy defender.

12. David Whyte (Moorefield): A man who had to bite his time getting into the team. Has recovered from his shoulder injury that he picked up earlier in the year. Started wing forward but was essentially a third midfielder fielding ball, getting break's and his intelligent distribution worked so well for Moorefield. His physical presence was the most impressive of the weekend, we all know he is in fine shape and he used it so well on Saturday fending off two player's at time's and breaking play up. One of his best performance's in a Moorefield jersey.

13.Jimmy Farrell (Johnstownbridge): This man's energy is frighting. People will ask the question why Daniel Flynn is not ahead of him but Farrell's unselfish role that he play's for JTB is a rare but great watch. He must of covered every blade of grass in St Conleth's, I would imagine the GPS system would show this. He live's on the edge at time's with his tackling and sometime's his antic's but I guarantee he is one of the first name's on Brian Flanagan's team sheet. He hassled and harried every Clane player and when in possession used the ball very well linking up some great play's but also preventing and cutting out Clane attack's all day. He also chipped in with a good score.

14.Paddy Brophy (Celbridge): So much pressure on this man from everyone in Kildare since his return from OZ. Saturday has shown that his kicking, his turning etc is getting sharper. He was the target man for Celbridge on Saturday and was in front of his man Eoghan Bateman at nearly every occasion. He kicked 4 points from play and was excellent all round dragging Naas defender's out of their position's and creating space for his teammate's. He will be marked by Luke Flynn in two week's and it will be an epic battle.

15.Ray Cahill (Sarsfields): Although the champ's went down fighting it was mainly down to this man's kicking. He score 1-9 in total and his free taking was excellent and his goal was well taken. This man is a big game player for Sarsfield's and once again showed that. He has probably been the best club player over the last few year's and I have no doubt he will come back again next year even stronger and hungrier.